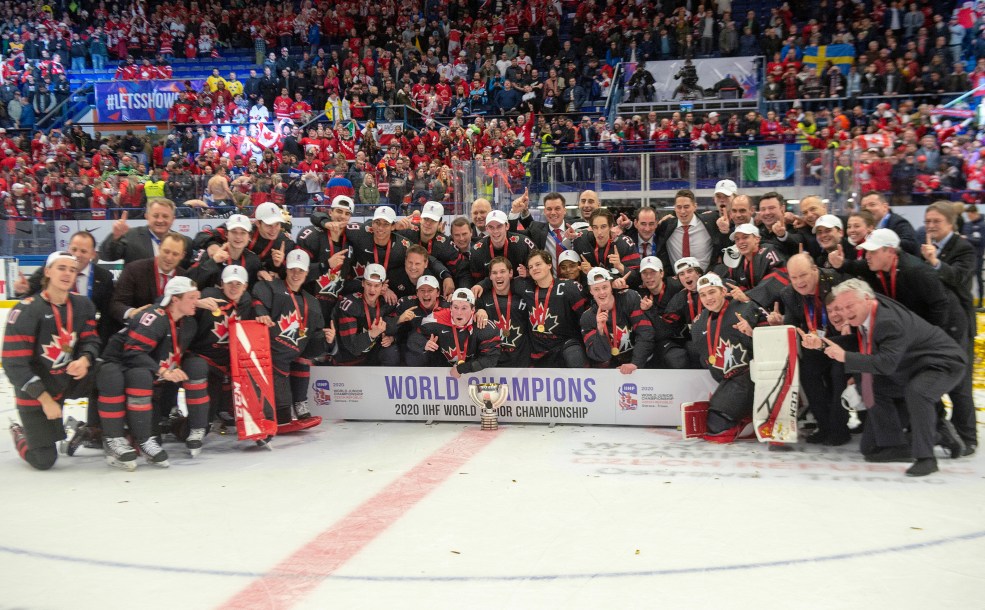 Team Canada wins gold over Russia at the 2020 World Juniors

In a major upset, Team Canada defeated Russia 4-3 to capture their 18th World Juniors title on Sunday in Ostrava.

Earlier in the preliminaries, Russia defeated Team Canada 6-0, the only game they lost in the tournament. This meant that Team Canada was looking for revenge and that they did. From blocking shots, diving, battling hard in the corners and heroic moments, Team Canada secured their 4-3 victory over Russia.

In the first period, Canada came out strong, maintaining pressure and keeping control of the puck. At times the penalty box got the best of them, however, Canada’s Joel Hofer took charge of the net until the end of the first period.

Into the second, Russia took advantage of the power play and opened the scoring for a 1-0 lead. Russia didn’t endure in celebration for too long as they received two penalties shortly after. With a five on three advantage, Canada decided to return the favour. With a shot on net and help from Joe Veleno and Alexis Lafrenière, Dylan Cozens was able to find the opening to put Canada on the board. This was Cozens second goal of the tournament.

YOU JUST LOVE TO SEE IT.pic.twitter.com/eZBXaKo7B2

Less than five minutes later, Russia scored again to lead the second period 2-1.  Now into the third period at 8:46, Russia took control of Canada’s zone and scored again to advance their lead to 3-1. Fortunately for Team Canada, that’s when everything changed.

In a quick attack down the ice, seconds after Russia’s goal, Calen Addison took a shot from the blue line and within the chaos at the front of the net, the puck deflected off the shin pad of Connor McMichael to make it 3-2.

This kid from earlier when 🇨🇦 3-2 goal was called good.
🎥 @TSN_Sports #WorldJuniors pic.twitter.com/lfuWaCHhzq

With less than ten minutes remaining, on another power play and an excellent example of tape to tape passes from Calen Addison and Lafreniere, Captain Barrett Hayton fired in a shot to tie the game 3-3.

At this point, the arena was electric and fans across the world were off their seats. Team Canada challenged Russia and it all worked out because at 4:02 pm Akil Thomas broke away from his defender and sent the team into an uproar. For his first goal of the tournament, Thomas gave Canada the 4-3 lead with 2:41 remaining.

Team Canada was able to hang on to the lead and defeat Russia 4-3 for their World Junior victory.

Lafreniere was named Most Valuable Player and Best Forward of the World Juniors tournament. He earned four goals and six assists in five games. He was also named an All-Star alongside Barrett Hayton and Joel Hofer, who was named Best Goalie.

Sing it loud and sing it proud. 🇨🇦

Canada, this is for you! 🍁🏆pic.twitter.com/ZJ9poCPeLW

This is Team Canada’s 18th World Junior victory with the last being in 2018. Earlier in the day, Sweden also beat Finland 3-2 for the bronze medal.