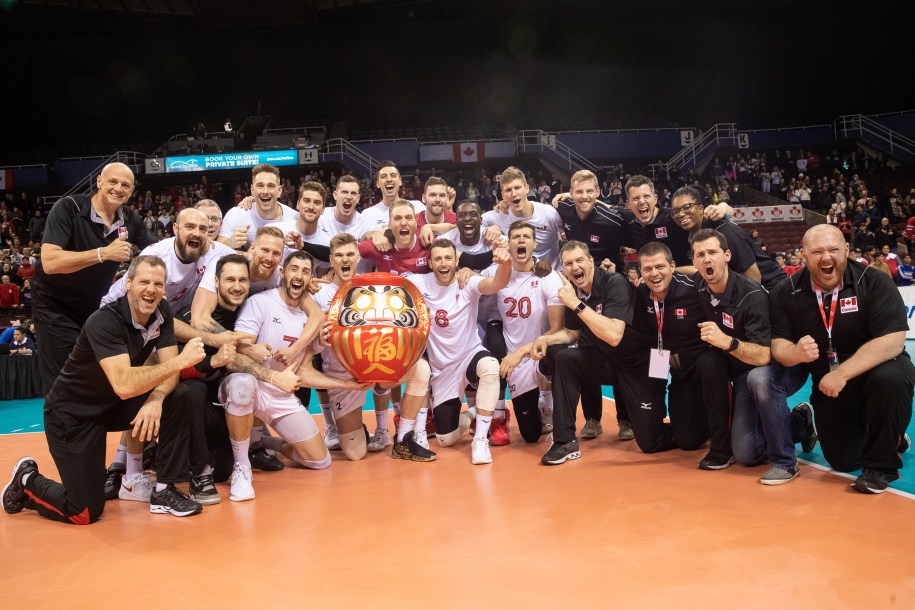 From a Tokyo 2020 qualification, to a first time World Cup victory, Team Canada had an exciting weekend.

We’ve pulled together everything you need to know about the exciting, cool, fun, news-making weekend that was.

Earlier in the weekend, the Canadian men took the first game in three straight sets to defeat Mexico. In their second match they rallied back from two sets down to beat Cuba 3-2. Canada was the only undefeated team at the four-country tournament.

Mark Hendrickson captured his first-ever World Cup podium finish and victory with gold in the men’s slopestyle event on Saturday at the FIS World Cup in Font Romeu, France.

Hendrickson had an outstanding first run to help him claim the top prize, scoring 86.30 points.

At the first-ever ATP Cup in Australia, Canada’s journey ended in the quarterfinals. After an intense match between Denis Shapovalov and Novak Djokovic, Adil Shamasdin and Peter Polanksy played the doubles match, with Shamasdin showing off some slick shots.

So Many Sweet Silvers 🥈

👏 Respect between 🇰🇷 and 🇨🇦 after the Men's 5000m relay which marked the end of the first-ever #FourContinents for Short Track! What a fantastic weekend of racing! 💥💪

Steven Dubois won three individual silver medals, in the 1500m, 500m and 1000m events. He stood on the second step of the podium for the final time in the men’s 5000m team relay, alongside Cedrik Blais, Charles Hamelin and Pascal Dion.

🇰🇷 Choi Min Jeong starts Sunday where she left off on Saturday – winning 🥇, this time in the Ladies' 1000m 💪💥

On the women’s side, Alyson Charles and Courtney Lee Sarault captured silver and bronze respectively in the women’s 500m. In the 1000m final, Sarault posted a time of 1 minute and 33.014 seconds to take home her second medal of the weekend with silver.

The women’s 3000m relay event, consisting of Charles, Claudia Gagnon, Sarault and Danae Blais finished with silver and a time of 4 minutes and 12.028 seconds.

Canadian fan favourite, Kim Boutin pulled out prior to this weekend’s competition due to a knee injury, but could be seen cheering her teammates on during the championships.

Over on the bobsleigh track, bobsledders, Christine de Bruin and Kristen Bujnowski reached the second step of the podium on Saturday at the IBSF World Cup in La Plagne, France.

Their two runs had a combined time of 2:01.64 to capture the silver, just 0.21 of a second behind the gold medal time.

“Everything is just moving and pushing forward towards our goals.”@RonMacLeanHTH and @TaraSlone catch up with @ehowitzer27 at today’s @PWHPA #DreamGapTour game to chat about the #ForTheGame movement and the importance of paving the way for future generations. ⬇️ pic.twitter.com/gDavdzosS3

The PWHPA’s Dream Gap Tour made a stop in the GTA over the weekend, featuring Olympians such as Marie-Philip Poulin, Natalie Spooner, Sarah Nurse, and many more. Unfortunately the outdoor skills competition was cancelled due to weather, but there were still plenty of games for fans to enjoy.

READ: Shapovalov and Auger-Aliassime: the journey to the Next Gen ATP Finals by the numbers

Unfortunately, US Open champion and Canada’s female athlete of the year Bianca Andreescu announced over the weekend that she would be withdrawing from the Australian Open to continue rehabbing her knee. Canada still has plenty of players to watch for, including rising stars Shapovalov and Auger-Aliassime.

National Pride in the Next Gen

Over in Switzerland, the first weekend of Lausanne 2020 saw some cool performances from Canada’s figure skaters and mixed curling team.

On Monday morning, the curling team qualified for the playoffs after claiming their fourth straight victory. The team, consisting of Opening Ceremony flag bearer Lauren Rajala, Emily Deschenes, Jaedon Neuert and Nathan Young, had a huge comeback victory against Russia on Friday.

Down 4-1 the Canadians storm back to defeat Russia 7-4, stealing three in the extra end.

Stole two in the final end just to get this. Remarkable start to the @youtholympics for Lauren Rajala, Jaedon Neuert, Emily Deschenes and Nathan Young. #cbccurl pic.twitter.com/WAwJTz5NON

As the official Lausanne 2020 broadcaster in Canada, CBC/Radio-Canada will provide daily coverage of the Games via the free CBC Gem streaming service as well as cbcsports.ca, radio-canada.ca/sports and the CBC Sports and Radio-Canada Sports apps. News stories, including previews, daily recaps and highlight packages, will also be available on CBC Kids News and MAJ.