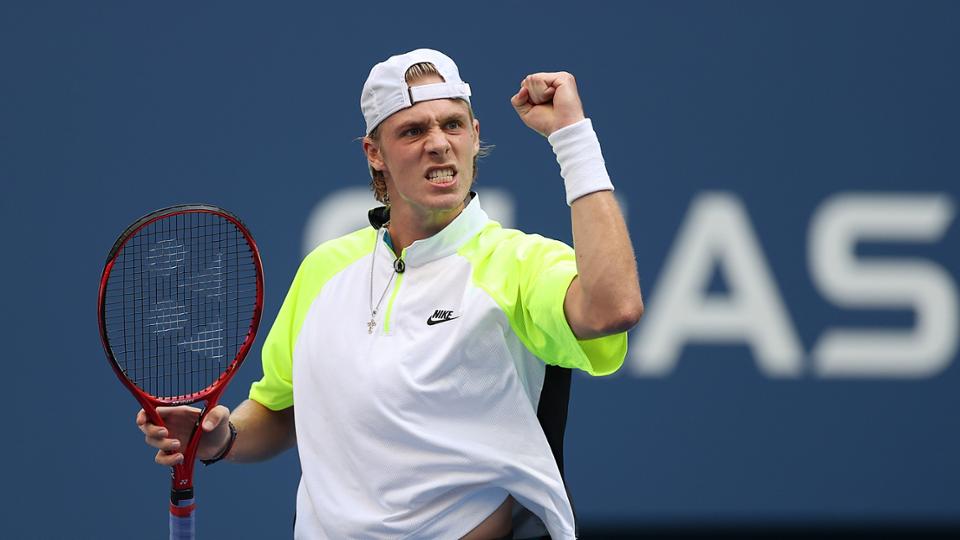 Shapovalov, Auger-Aliassime and Pospisil make history at the US Open.

On Monday, Félix Auger-Aliassime came up short in his fourth round match against the No. 2 seed Dominic Thiem, falling 7-6(4), 6-1, 6-1. This was his first Round of 16 at the US Open and Team Canada is sure it will not be his last.

FAA & Thiem are ready for the 💨 pic.twitter.com/GPjHpupxtK

Auger-Aliassime battled the Austrian for over an hour to a tiebreak in the first set before falling in straight sets.

The 20-year-old from Montreal came into the tournament as the No. 15 seed and left as the first men’s player born in the 2000s to make a fourth round at a Grand Slam Tournament.

Not meant to be today but still a great #USOpen and nice to be back on the court after such a long time away 😊. Big thank you to everyone for the support! 🙏🏼. Next up ➡️ Roland Garros pic.twitter.com/oFaVK8VCdJ

He wasn’t the only Canadian ousted from the tournament on Monday in the fourth lap. Fellow Canadian, Vasek Pospisil lost in straight sets to Australian Alex de Minaur 7-6(6), 6-3, 6-2.

Over to men’s doubles, Denis Shapovalov and partner Rohan Bopanna of India were defeated by Dutchman Jean-Julien Rojer and Romanian Horia Tecau 7-5, 7-5.

On the women’s side, Gaby Dabrowski and American Alison Riske fell in their doubles quarterfinal 6-4, 6-2, to the American duo Asia Muhammad and Taylor Townsend.

Up next in men’s singles, Shapovalov will face world No. 27 Pablo Carreno Busta of Spain on Tuesday in the quarterfinals.

In their fourth round match, the No. 7 seed and world No. 10, managed to take a first set advantage after a long and tight opening set. Shapovalov earned the first break of the match early in the second set, jumping to a quick lead.

He continued his solid play and levelled the score. In the third set, the Canadian converted on an early break point, to take the lead in the match. Shapovalov kept gaining more momentum as play went on, while Goffin began producing more errors.

Brilliant from start to finish. Up next: Pablo Carreño Busta. pic.twitter.com/pg8xfpdBgo

Despite some difficulties while serving, Shapovalov had an all-around strong performance, playing well from both the baseline and the net to book a ticket to the Round of eight on Tuesday.

The Canadian’s next opponent will be world No. 27 Pablo Carreno Busta of Spain on Tuesday.

Previously on Saturday, Félix Auger-Aliassime and Vasek Pospisil won their third round matches to secure spots in the Round of 16. Both will play on Monday, with the hopes of joining Shapovalov in the fourth lap.

On the sixth day of the US Open, history was made as three Canadian men qualified for Round 4 of a Grand Slam tournament for the first time since the beginning of Open Era. Félix Auger-Aliassime and Vasek Pospisil secured their tickets, joining Denis Shapovalov in the Round of 16 at the US Open.

🇨🇦 History has been made at this year’s #USOpen with three Canadian players reaching the second week of a Grand Slam for the first time 🇨🇦 pic.twitter.com/uuaISwt5Vs

Auger-Aliassime made short work in his match, dominating Frenchman Corentin Moutet in three straight sets 6-1, 6-0, 6-4. He become the first male player born in the 2000’s to qualify for the fourth round of a Grand Slam tournament.

His next opponent with be world No. 3 Dominic Thiem of Austria. He will face him on Monday for a place in the quarter finals.

The winning point! For the first time in his career, Vasek Pospisil advances to the fourth round of the US Open. pic.twitter.com/Vr49Qqs4E9

Earlier in the day, Pospisil was the first Canadian in action against Roberto Bautista Agut of Spain. His stunning comeback win, in five gruelling sets earned him a spot in Round 4.

As one of the most consistent players on tour, Pospisil surprised us by defeated the No. 8 seed and 11th in the world. Pospisil pulled out a strong comeback in the last two sets, after falling 2-1 behind after three innings. He finally got the upper hand to defeat him 7-5, 2-6, 4-6, 6-3, 6-2. He advances to the fourth lap for the first time in his career.

His next opponent with be Australian Alex de Minaur. He will face him on Monday for a place in the quarter finals.

These two victories on Saturday, come less than a day after Denis Shapovalov completed a brilliant comeback win over Taylor Fritz to secure his spot.

In doubles, Denis Shapovalov and his partner Rohan Bopanna won their third round match against the German duo of Kevin Krawietz and Andreas Mies in three sets, 4-6, 6-4, 6-3. The Canadian will be back in action in the singles tournament tomorrow. He will face Belgian David Goffin in order to qualify for the quarters.

Denis Shapovalov pulls off an incredible comeback to win in the third round of the U.S. Open on Friday.

Continuing a very promising tournament for Canadian men, Shapovalov rallied back in a five-set thriller to beat American Taylor Fritz 3-6, 6-3, 4-6, 7-6(5), 6-2 and will advance to the fourth lap.

Delaying two sets to one against Fritz, the Canadian showed a lot of frustration in the roller-coaster match. He even received a code violation warning for abusing his racquet. He managed to turn the game around in order to win his ticket for the round of 16.

After defeating the 18th seed, Shapovlov will face a new challenge on Sunday as he faces Belgian David Goffin, ranked No. 7 seed and 10th player in the world. He will try to qualify for his very first quarter-finals in a Grand Slam.

Shapovalov becomes the first Canadian to book a spot in the fourth round at Flushing Meadows this year. This comeback victory means Shapovlov will at least match his best performance at the Grand Slam. The Canadian player also reached the fourth round in his U.S. Open debut in 2017.

Félix Auger Aliassime and Vasek Pospisil will fight for their own tickets on Saturday.

Félix Auger-Aliassime and Vasek Pospisil reached the third round of the US Open on Thursday.

Brilliant from start to finish.

🇨🇦 Félix Auger-Aliassime takes down 🇬🇧 Andy Murray 6-2, 6-3, 6-4 in by far his most comprehensive victory at a Grand Slam. #USOpen

The Montreal native dominated throughout his match, compiling a total of 52 winners, including 24 aces.

His next opponent will be determined in a matchup on Friday between Britain’s Dan Evans or Corentin Moutet of France.

This marks a career-first for Pospisil, who will play in the third round of the US Open for the very first time.

In a tight match from start to finish, the two Canadians battled it out on the court for a lengthy three hours and 18 minutes. However, two untimely double faults by Raonic in both the third and fourth set would ultimately give Pospisil the edge he needed.

In the final set, the Vancouver native broke Raonic to go up 5-3 and finished off the match on serve.

His victory has now levelled his head-to-head record against the Thornhill native at 2-2.

Next up, Pospisil will take on No. 8 seed Roberto Bautista Agut of Spain.

Denis Shapovalov also made it through to the third round with a victory over South Korea’s Kwon Soon-Woo on Wednesday evening. He’ll be taking the court against American Taylor Fritz on Friday.

This marks the first time Canada has ever had three players in the third round of a Grand Slam.

On the women’s side, 17-year-old Leylah Annie Fernandez fell 6-4, 6-3 to American Sofia Kenin in a second-round women’s match.

Denis Shapovalov is moving onto Round 3 of the US Open after defeating South Korea’s Kwon Soon-Woo on Wednesday evening.

Fired up. Moving on.

Shapovalov appeared to be in trouble late in the match broken for 4-2 by Kwon in the third set. However, he was able to turn it around when it mattered most, winning six consecutive games to take control. In all, the 21-year old ended up crushing 62 winners to Kwon’s 19.

Next up, Shapovalov will face American Taylor Fritz on Friday, September 4th. The matchup has favoured the Canadian in the past, holding a 2-0 record over Fritz.

Four other Canadians will hope to follow Shapo’s footsteps on Thursday afternoon, as they enter their second round matchups. Félix Auger-Aliassime will face former world no. 1 Andy Murray on the court, while fellow Canadians Milos Raonic and Vasek Pospisil will battle each other. On the women’s side, Leylah Annie Fernandez will go head-to-head with American Sofia Kenin.

Team Canada breezed through the first round of the US Open on Tuesday, where all four Canadians on the court punched their tickets to the second round.

Félix Auger-Aliassime was first on the court, where he defeated Brazil’s Thiago Monteiro 6-3, 6-7 (7), 7-6 (6) after a nearly four-hour long matchup. This is the 20-year-old’s first time reaching the second round of the US Open after losing to fellow Canadian and good friend Denis Shapovalov the past two years. Next up, he’ll face 2012 US Open Champion and former world no. 1 Andy Murray of Great Britain.

It was a day of firsts for 17-year-old Leylah Annie Fernandez as well, who won the first Grand Slam match of her young career. She knocked off Vera Zvonareva of Russia 6-4, 7-5. In the second round, she’ll take on No. 2 seed Sofia Kenin.

Elsewhere on the court, Vasek Pospisil moved past Germany’s Philipp Kohlschreiber 7-6 (4), 7-5, 7-6 (3) to reach the second round for the third consecutive year.

Tired of all the winning? We’re not! And neither is @VasekPospisil. 😏

He overcomes Philipp Kohlschreiber 7-6(4), 7-5, 7-6(3) to book a possible match-up with Milos Raonic, who leads by a set in his current match.#USOpenCanadaDay 🇨🇦 pic.twitter.com/Ttxp5ISPom

Finally, Milos Raonic took on Leonardo Mayer of Argentina to complete the Canadian sweep. He was the last Canadian to book his ticket after a dominating match 6-3, 6-2, 6-3. The Thornhill native is coming off a hot streak after reaching the Western & Southern Open final just days before.

Pospisil and Raonic will go head-to-head against one another in the second round. The two have only faced each other on three other occasions, where Raonic holds a 2-1 record.

Denis Shapovalov won his first round match up on Monday and will be moving onto the second round to take on world No. 73 Kwon Soon-Woo of South Korea.

On the first day of the US Open, Denis Shapovalov was the lone Canadian in action, securing a win with a victory over Sebastian Korda inside Louis Armstrong Stadium.

The Richmond Hill native defeated Korda in four sets of 6-4, 4-6, 6-3, and 6-2. He will face either American Thai-Son Kwiatkowski or South Korean Soonwoo Kwon in the next round.

Shapovalov is the 12th seed in men’s singles, and will also compete with Rohana Bopanna in men’s doubles starting on Wednesday.

Denis Shapovalov gets the crucial break in the 4th with a fantastic forehand winner! #USOpen pic.twitter.com/Dilh5YodwX

READ: Team Canada Tokyo 2020 tennis hopefuls in action at the US Open

This is Shapovalov’s fourth time competing at the US Open. During his first US Open at 18-years-old, he made it through the qualifying rounds and into the main draw, before falling to Pablo Carreno Busta in the Round of 16. The other two years he exited the tournament at the Round of 32.

Prior to the US Open, Shapovalov competed at the Cincinnati Open. He was defeated by Jan-Lennard Struff past the second round.

Milos Raonic, Vasek Pospisil, Félix Auger-Aliassime, and Leylah Annie Fernandez will all be in action on Tuesday.