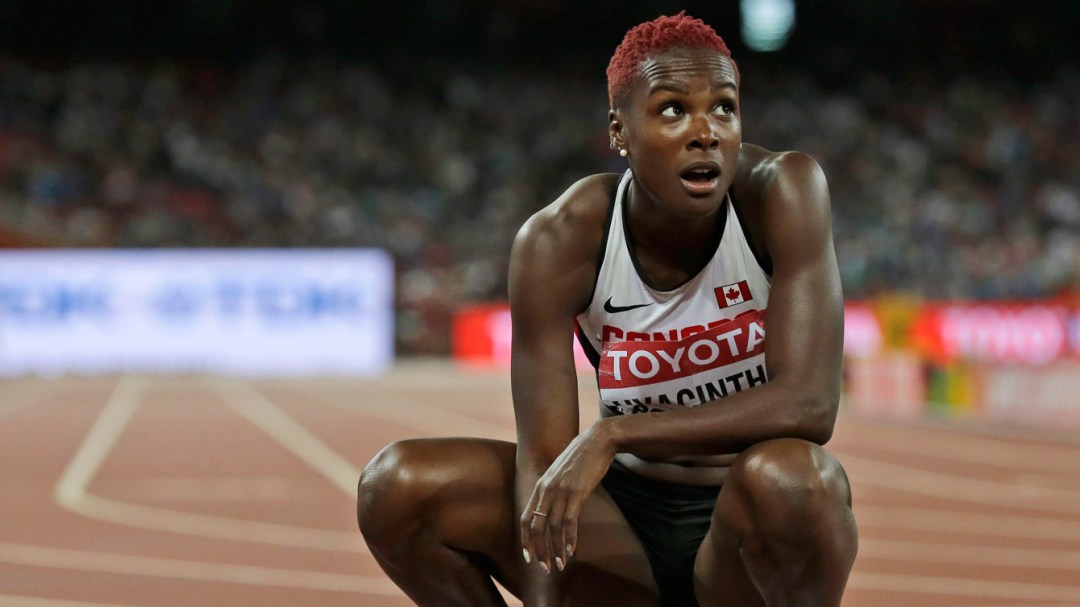 Sprinter Kim Hyacinthe on believing in yourself, leadership, and puzzles

Kim Hyacinthe is hoping that the third time’s a charm for her Olympic dream to become a reality.

After missing out on qualifying for London 2012 and being named to the Rio 2016 team but having to withdraw just days before travelling due to injury, the 31-year-old has been resilient in the face of adversity.

As she recently told Olympic.ca, a relentless belief in herself through an unconventional year of training during the pandemic, following a career filled with challenges continues to fuel Hyacinthe’s drive on what is now an extra long road to Tokyo 2020.

Where were you and how did you feel when you heard that the Tokyo 2020 Olympic Games would be postponed a year?

“I was in my house and I kind of had the feeling that it was going to happen. I don’t even know what I was feeling because it was such a weird situation with everybody being in our homes and not being able to train and having this virus out there. It’s almost like I didn’t have any feelings. I was just like, ‘Okay, it’s postponed. It is what it is.'”

When her training facility was shut down, she was able to use some of their weights and bars to stay in shape, but it was far from what a high-performance athlete training for the Olympic Games is accustomed to.

“My training partner and I made a little pod with ourselves. And we just went everywhere together and trained. I have a shed in my backyard and I just lifted out there in my backyard. And then we ran in parks, on the streets, wherever we didn’t get kicked out of.”

While Toronto, where Hyacinthe lives and trains, is in the midst of its second wave of COVID-19, the challenges continue. Her gym is closed for a second time, so she continues to adapt and is lifting outside again – even in mid October – but doesn’t know how long she’ll be able to do that with the changing weather.

What kept you determined to reach your Olympic dream?  What has kept you going?

“Honestly, I ask myself that, because I’m not entirely sure. I just know my potential and I know what I can do. And I really, really believe in myself. So I just think that that can’t be the end for me. There’s more for me down the line.” 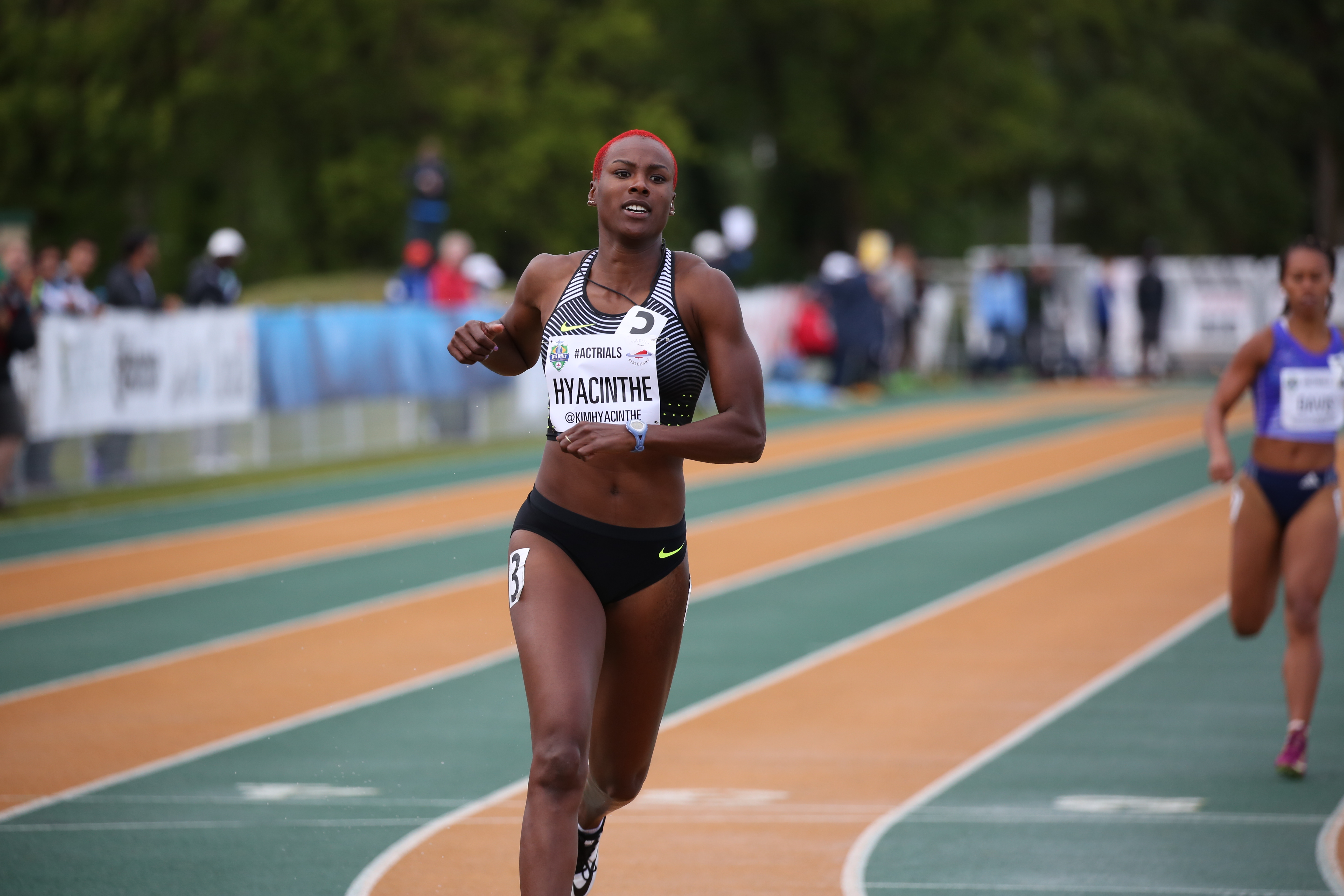 Kimberly Hyacinthe sprinting in the 200m at the Canadian Track and Field Championships and Selection Trials for the 2016 Olympic Games, in Edmonton, Alta.  (Steve Boudreau/COC).

Hyacinthe, who grew up in Montreal playing both basketball and running track, was inspired to focus on track and represent Canada after being able to watch the IAAF World Youth Championships in Sherbrooke, Quebec in 2013.

“That really sparked my desire to be part of Team Canada and wear the uniform, especially at that age. I was like, ‘Yeah, I want to wear Canada. That suit looks so cool!.’ I wanted it. And if I can’t buy it, I have to work for it to get it.”

Watching that event fuelled her inner fire and she took her training to the next level. Two years later, in 2005, she qualified for the IAAF World Youth Championships in Marrakech, Morocco, to her coach’s surprise. Fellow Team Canada athlete Melissa Bishop also competed at that event. After experiencing what it felt like to represent Canada and wear the ‘Team Canada suit’ that she so badly wanted to wear, Hyacinthe knew what she wanted for her track career and that fierce belief in herself fuelled her determination to one day represent Canada at the Olympic Games.

On October 28th, Hyacinthe was one of eight Team Canada athletes participating in Team Canada Champions Chats – a live online chat with students from across the country. Team Canada Champion Chats, which is a partnership between the Canadian Olympic Committee, the Canadian Paralympic Committee, and Classroom Champions, is a national education program designed to empower Canadian students to focus on themes including embracing challenges, mental health, diversity and inclusion, achieving goals, and ultimately become a champion in their community.

“What I hope to convey to them is just believing in yourself. And like, really, really, truly believing in yourself. Not necessarily relying on other people to believe in you and your capabilities and knowing that anything is possible when you work for it. And if you really like something, then just stick to it and keep going, because there’s so much noise out there. There’s a lot of people that don’t believe or don’t see your vision. And if you truly want to be something, then you can. You just have to believe in yourself.”

Hyacinthe often does speaking engagements at schools, but while it’s not safe during the pandemic, she is excited about the opportunity to speak to kids through this virtual platform. She hopes that the online environment will allow them to feel more comfortable and ask more questions.

Students that participated in Wednesday’s live chat had already watched video challenges from each of the athletes on a specific theme. Hyacinthe focused on the concept of leadership. In her view, a person who shows great leadership is someone who is not afraid to lose and not afraid to fail. She believes that great leaders are courageous, communicate very well, have character in the face of adversity and are both passionate and resilient. When asked who she believes are great leaders in sport, she looks to teammates like Bishop and Phylicia George.

What do you admire about Melissa and Phylicia’s leadership qualities?

“It’s how Melissa carries herself and doesn’t let anything get to her too much. Of course, she’s lived some disappointments, but she bounced back and she’s still the same person. She was very gracious when she placed fourth in 2016 and she has progressed her training to attain her objective of winning an Olympic medal. Same with Phylicia, just to be able to go through adversity and continue to be themselves.”

When asked who she has looked to for leadership throughout the pandemic, Hyacinthe turns inward. “Myself,” she said, laughing. “I was mostly alone the whole time, except for my training partners. So I had to get stuff done by myself and be my own cheerleader. I had to have conversations with myself, sing to myself, have parties for myself. But also, Marnie.”

Aside from training during the COVID-19 shutdown, Hyacinthe has been spending time like most Canadians: discovering new hobbies, binge-watching television shows, and cheering for her favourite basketball team.

“I started doing puzzles. I actually really like it, sitting down with music and just trying to finish it. I need to finish things, so I did stay up very late some nights, but I didn’t have anywhere to go the next day.”

In between puzzles, she started watching The Office and finished the last season of Schitt’s Creek, noting she was a fan of the Emmy Award-winning Canadian comedy “way before COVID-19, I’m not a bandwagon jumper here.”

“I have always been a Raptors fan. As soon as I started basketball, actually, my number was 15 because of Vince Carter, so nobody asked me for it. Even in Montreal, that was my number. Right now I’m liking watching Lu Dort. He’s from Montreal, the same area that I grew up in. It’s fun to watch him evolve into the player that he is right now. I can’t wait to see what he does eventually.”

What lesson has running taught you throughout your life?

“When you think it’s over, it’s never over. Or when you think you can’t, you still have some more. Especially in practice, sometimes you have one more run and you’re like, how can I do this, and you still end up doing it. I just think that’s one of the most valuable lessons. You can’t give up.”

Teachers, parents, and students can access the lesson plans by visiting Championchats.olympic.ca. The English chat is also available below for anyone to watch, while the French chat, in which Hyacinthe participated in, can be watched here.