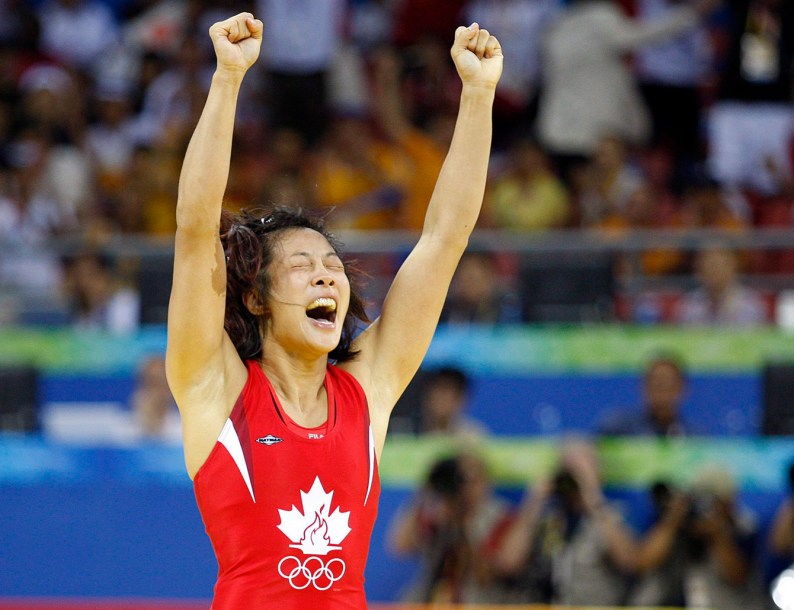 She has remained passionate about sport since last competing for Team Canada, taking on everything from being an assistant Chef de Mission at Rio 2016 to coaching young wrestlers to becoming an Olympic broadcaster.

In both of her Olympic appearances, Huynh climbed the podium. During her first Olympic Games at Beijing 2008, the Hazelton, B.C.-born daughter of ethnic Chinese refugees from Vietnam, produced a memorable moment as she stood atop the podium and tears flowed during the playing of O Canada. Huynh had flown under the radar until she defeated the two-time reigning world champion in the 48kg final to give Canada its first gold of the Games.

“I was buzzing with excitement for the opportunity and the unknown. I faced down my nemesis — a decade of being beaten by Japan’s Chiharu Icho — with a confidence and energy that was there from the work I had done on the mats and in my head. This was bolstered by the palpable support of my teammates, my family and friends all over the world. My husband and my family were there in the stadium cheering me on, actually my parents had never seen me compete before! It was an amazing feeling to win for Canada. There was a profound sense of relief, pride to be Canadian, and gratefulness to all those who had supported me along the way,” Huynh explained to Olympic.ca.

In her second Olympic appearance at London 2012, she secured a bronze medal in the same event. During her career, Huynh also captured 11 national titles (2000-02, 2004-11), two Pan Am Games gold medals (2007, 2011), and four world championship medals (one silver, three bronze). In September 2013, she was inducted to the United World Wrestling Hall of Fame.

That same year, she was elected to serve as Chair of the United World Wrestling Athletes Commission, a position she held until 2017. While in that leadership position, she was a vocal advocate for her sport as it fought to remain on the Olympic program following a surprising decision by the IOC to cut wrestling from the list of core Olympic sports. Her efforts proved successful.

In 2016, Huynh served as assistant Chef de Mission for Team Canada, taking on a mentoring role at the Olympic Games in Rio de Janeiro.

After retiring from competitive wresting, Huynh began coaching the junior program at the Calgary Dinos Wrestling Club. Since 2015, Huynh has been Wrestling Canada’s Next Gen coach based in Calgary. She mainly works with these junior athletes at tournaments and training camps, so the pandemic has created many new obstacles to overcome when connecting with young athletes.

“I’m grateful for being able to develop some programming that could help with wherever their training may be at this year. I love to see the growth of athletes. I love to see an openness to learn, the courage to try, and the resilience of facing tough challenges. I love learning from the athletes and supporting them in their pursuits,” said Huynh.

While pivoting her coaching methods, she has welcomed the opportunity to spend more time with her two “sweet, rambunctious, hilarious” children. She is also continuing her studies towards an Advanced Coaching Diploma as well as becoming certified as a Mental Performance Consultant.

“I’ve always been interested in Psychology but Mental Performance became a passion of mine because of the huge impact it had on me. These skills and concepts can help everyone, not just athletes. Being able to build on my knowledge and experience in mental performance and learning to deliver it has been one of those unexpected opportunities that I am truly grateful for,” said Huynh.

Huynh will soon be back in front of the camera, but this time as part of CBC’s broadcast crew for Tokyo 2020. As she explains it, the most intriguing part about being an analyst, is that she will be have to train for this Olympics again.

“This time, I will be doing something that I haven’t put a ton of training into and that definitely makes me nervous! It’s a very cool challenge that I feel very privileged to have. I’m super excited to be a part of the CBC team and that I get to watch a lot of wrestling and cheer on our Canadian athletes,” Huynh shared.