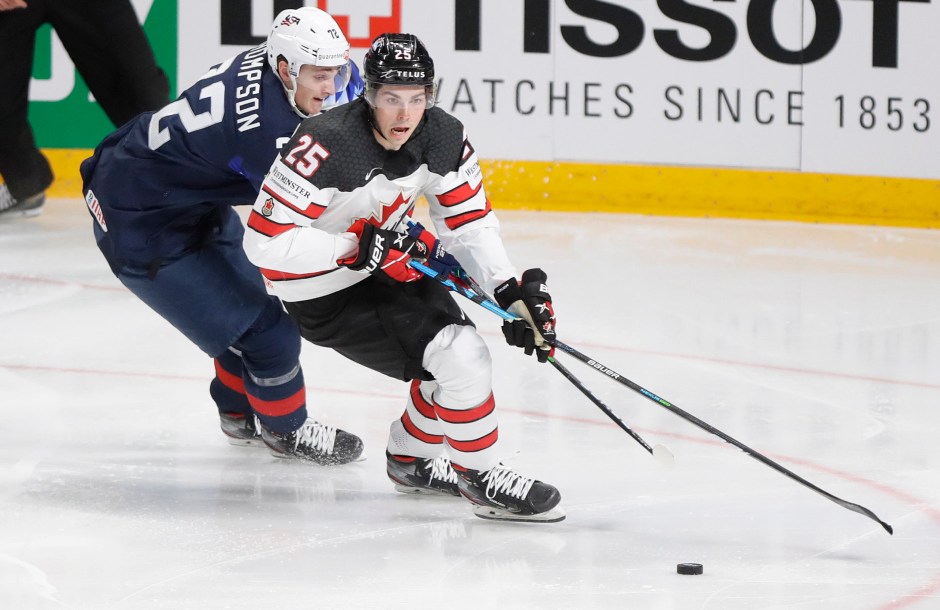 After a historically bad 0-3 start to the tournament, Canada defied the odds by advancing to the final at the IIHF Worlds with a 4-2 win over the United States on Saturday.

Brandon Pirri got the Canadians on the board early off the rush as he potted Sean Walker’s rebound just two minutes into the game.

The Americans responded late in the first as Colin Blackwell deflected home a shot from Christian Wolanin, tying the game at 1-1.

It was the same story in the second frame as Canada struck again about four minutes in. Andrew Mangiapane won a battle behind the United States’ net and forced his way in front, eventually poking the puck in to put Canada up 2-1.

Early period goals seemed to be the winning formula for the Canadians as they added to their lead just 45 seconds into the third. Connor Brown threaded a sweet stretch pass to Mangiapane who walked in alone and deked goaltender Cal Petersen, making it 3-1 Canada.

Three minutes later American Sasha Chmelevski shoveled home a rebound, bringing the Americans back within one at 3-2.

However, the comeback was not to be as Canada eventually added an empty netter from Justin Danforth to clinch the win and their ticket to the gold medal game.

Canada will play in their second consecutive gold medal game at the IIHF Worlds, taking on either Finland or Germany at 1:15 pm ET on Sunday.

Canada is off to the semifinals at the IIHF World Championship after defeating Team ROC 2-1 in overtime.

After the first period, the game was still scoreless. Team ROC opened the scoring at 14:32 into second period, after some defensive errors from Team Canada.In the third period, Canada’s captain, Adam Henrique, tied it up at 5:03 on the power play.

Neither team was able to score again in the third, setting viewers up for an exciting 3-on-3 overtime.

At just over two minutes into overtime, Andrew Mangiapane scored the game winning goal, his fifth goal of the tournament.

Team ROC finished at the top of Group A, while Canada concluded the preliminary round in fourth place in Group B.

Canada will face the United States in the semifinals on Saturday at 7 a.m. ET. The second semifinal will feature Germany and Finland.

After the conclusion of the preliminary round at the IIHF World Championship in Riga, Latvia, Canada will move onto the quarterfinals and face Team ROC.

Team Canada wrapped up group play on Tuesday with a 3-2 shootout loss to Finland. Brandon Pirri quickly opened the scoring for Canada with a goal after just one minute and 30 seconds of play.

With four minutes to go in the third period, Finland tied it again with Ruotsalainen’s second goal of the game.

Neither team scored in the five minute overtime, bringing the game to a shootout. Three Finnish players, including Ruotsalainen, managed to score on Canadian goaltender Darcy Kuemper, while Pirri and Adam Henrique found the back of the net for Canada.

This game concluded Canada’s preliminary round with a record of three wins, three regulation losses and one shootout loss. The team finished fourth in Group B.

On Tuesday afternoon, Germany defeated Latvia 2-1, which secured Canada a spot in the quarterfinals. Canada needed a regulation win by either country in order to advance. On Thursday, Canada will play Team ROC, the top team in Group A, at 1:15 p.m. ET.

Team Canada is looking for their playoff spot after defeating Italy 7-1 on Sunday at the 2021 IIHF World Championship.

Cole Perfetti opened the scoring with an early rebound goal and from there Canada’s offence took off. Andrew Mangiapane scored shortly after for a 2-0 lead. Troy Stecher took control of the goal line with a wrist shot and Adam Henrique added a backhanded goal to make it 4-0 at the end of the first.

Italy found the back of the net in the middle of the second period, although Canada came back to increase their lead minutes later. Mangiapane earned his second goal of the game and Maxime Comtois landed a slapshot to cap the scoring at intermission.

In the third period, Brandon Pirri landed the final goal to make it a 7-1 game. Honourable mentions also go to Connor Brown for four assists, and Mangiapane and Henrique who both saw two assists.

The third consecutive win helps the Canadians continue their push for playoffs. This moves Canada into a tie with Germany for the fourth and final quarterfinal spot in the pool.

Canada looks forward to their final preliminary game with a must-win game against Finland on Tuesday at 5 a.m. ET.

Andrew Mangiapane opened the scoring for Canada just six minutes into the game to give his team an early 1-0 advantage. Mangiapane recently joined the Canadian roster, making his Team Canada debut in their last game against Norway. In his first game wearing the maple leaf, he scored their game winning goal over Norway

Early in the second, captain Adam Henrique made the game 2-0 for Canada after tipping in a shot from Owen Power.

Henrique continues to make an impact for Canada this tournament, putting up five points in his last two games.

Kazakhstan was quick to respond back, cutting Canada’s lead in half with a goal from Nikita Mikhailis before time expired.

In the third, Mikhailis put up another goal to even out the game less than two minutes into the final period. However, it wasn’t long before Cole Perfetti restored Canada’s lead off of a pass from Jaret Anderson-Dolan for the game winner.

Connor Brown buried an empty netter with just seconds to go to bring Canada’s lead to 4-2.

Canada currently holds a 2-3 record and sits in 6th place in the Group B standings with five points. They’ll have their work cut out for them to make the quarterfinals as the top four teams in each pool advance.

In order to do so, Canada will need to win their remaining round robin games and hope for some losses from host Latvia and Kazakhstan, who sit ahead of them in the standings.

Their journey to the quarterfinals will continue on Sunday, May 30 where they’ll take on Italy at 9:15 am ET.

Team Canada is back in the W column.

After going winless through their first three games of the 2021 IIHF World Championship, Canada earned their first win of the tournament in a 4-2 victory over Norway.

Connor Brown set the tone early, getting things started just 22 seconds into the game. He sniped one past Norwegian goaltender Henrik Haukeland to give the Canadians an early 1-0 lead.

His goal was followed by Canadian captain Adam Henrique, who scored his first of the tournament to give Canada a 2-0 lead before the first intermission. His goal came after two costly penalties by Norway’s Ole Julian Holm and Christian Kaasastul, giving Henrique the opportunity to tuck one behind the net on a 5-on-3 advantage.

Owen Power registered an assist for both goals.

In the second, Norway came out with momentum scoring back-to-back goals to tie the game at 2-2. However, Andrew Mangiapane was quickly able to restore Canada’s lead by one off of a slick pass from Connor Brown, who notched his third point of the game. This goal was a special one for Mangiapane, who was making his Team Canada debut.

In the third, Adam Henrique secured their victory with a shorthanded goal to make it a 4-2 game.

Darcy Kuemper started in net for Canada and made 13 saves in their win.

Next up, Canada will face Kazakhstan on Friday at 9:15 am ET.

Canada’s struggles continued at the IIHF World Championship on Monday as they dropped their third straight game in a 3-1 loss to Germany.

Stefan Loibl scored the ice breaker for the Germans midway through the first period, marking the third time in three games that Canada allowed the first goal.

Nick Paul responded for Canada late in the first to cut the deficit in half. However, that’s all the Canadians could muster offensively despite outshooting their opponents 31-17.

Korbinian Holzer added an empty net goal for Germany with two minutes to play in the third to make it a 3-1 final.

With the win Germany remains undefeated, rising to the top of Group B. Canada, winless through three games, sits in seventh.

Canada will be in action again on Wednesday as they take on Norway at 1:15 pm ET.

Team Canada dropped their second straight game at the IIHF World Championship on Sunday, falling 5-1 to the United States.

The Americans opened the scoring less than eight minutes in with a goal from Jason Robertson. The goal came as a result of a miscue from Canadian goaltender Darcy Kuemper. The netminder ventured behind his net to play the puck, but Conor Garland poked it loose to give Robertson the easy tap in.

Down 1-0 after 20 minutes, the game was still within reach for Canada. However, the United States scored twice in the opening 3:27 of the second period, extending their lead to 3-0 and taking a stranglehold on the game.

After American Trevor Moore scored his second of the game to make it 4-0 in the third, Maxime Comtois finally got the Canadians on the board with the team’s first goal of the tournament.

The single tally was not enough, though, as the United States added another to finish the game off 5-1.

With a record of 0-2, Canada finds themselves in seventh place out of eight teams in Group B. They’ll have another chance to get their first win of the tournament on Monday as they take on Germany at 1:15 pm ET.

Canada got off to a rocky start at the IIHF World Men’s Hockey Championship on Friday, losing 2-0 in their opening round robin game against host Latvia.

The result marked Latvia’s first win in 13 matchups between the two nations at the tournament.

The Canadians dominated the shot count 38-17 but were unable to solve Latvian goaltender, Matiss Kivlenieks, who was the star of the show.

Team Canada looked out of sync early on, struggling to string together accurate passes. The game appeared to be heading for a scoreless first period until Latvia scored just before the buzzer.

Canada looked more threatening in the second period but still failed to beat Kivlenieks. Meanwhile Latvia doubled their lead with a deflection from Oskars Batna.

Down two late in the game, Canada pulled their goalie with more than three minutes left. However, Kivlenieks stood tall as the Canadians were unable to break through the Latvian wall.

The 2-0 loss was not the result that Canada wanted (or expected) in their opening game, but it surely provided a learning experience nonetheless.

Canada will play its next game on Sunday at 1:15 pm ET against the United States.