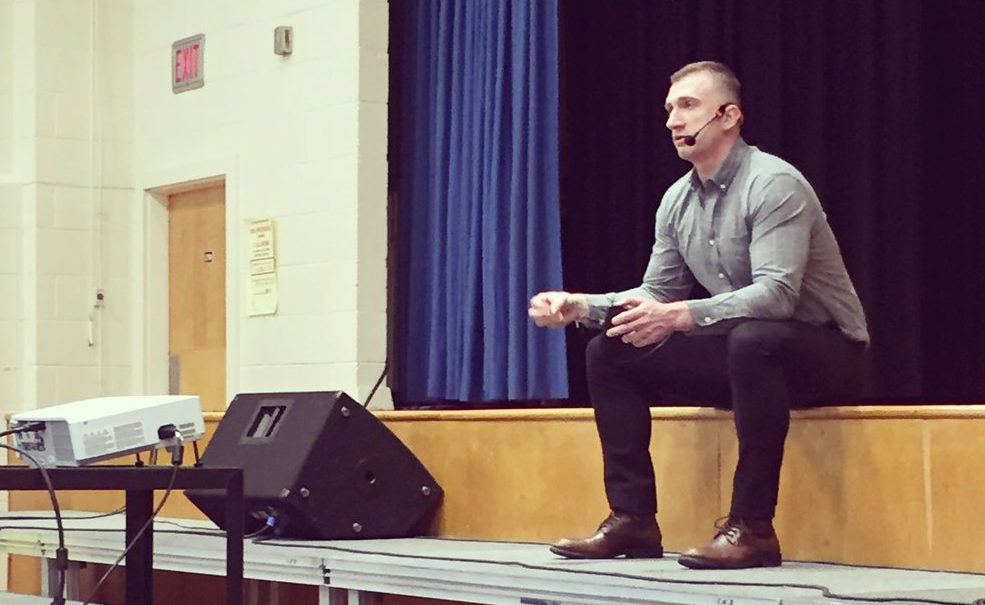 Letter to My Younger Self – Brock McGillis

It’s not hard to see – hockey is embedded in Canadian culture. Canadian cities and fans are hockey-mad, and this condition is quite infectious. When you grow up through the elite ranks of the hockey world, like former goalie Brock McGillis, you experience a hyper-masculine environment. An environment where boys become men in an arena of masculine values, relations, and rituals.

After having the pleasure of interviewing Brock, the advice shared is that we are all different and we all have different things we enjoy, so why conform to this idea of normal to play sport? This 2nd edition on the #OneTeam blog; “Letter to My Younger Self” of the 34-year-old ambassador contributes by reflecting on what he would say to his 18-year-old younger self in the process of his struggle of coming out. His story is one of denial, fear, blackballing and strength. For that, thank you, Brock for sharing your unique story.

Remember when you were six and hated playing hockey? Letting the next kids on the bench take your turn, getting so bad to the point where you offered your helmet to a teammate when he broke his.

Dad was so fed up. Until you said you wanted to be a goalie. Go put on your pads. A life of pain and misery (physically and emotionally) awaits you.

That same year, you’d remember watching a movie with a gay character, asking your parents; “Am I gay?” Their response was; “I’m not sure but if you are, you are.”

There was nothing to it, no questions or anything.

Switching from player to goalie and even realizing from a young age that you were gay. Dad, Mom, and younger brother Cory were so supportive and nonjudgmental towards homosexuality and that’s one thing I want to start by telling you.

Right now, your head is so wrapped up in this hockey world. Playing at high levels of hockey, experiencing this hyper-masculine world to unhealthy ranks. You are feigning happiness and are longing to be accepted. You portray yourself as a confident kid in this hyper-masculine bravado kind of way, but it’s a fake confidence as opposed to just being yourself. You’ve become this womanizer, suppressing your sexuality to the point that you get angry for anything non-heterosexual thought.

It feels empty. Hollow inside.

You won’t be able to count the amount of times you hear phrases like: That’s gay or what a homo in the dressing room over the course of your hockey career. Words like fag, p—y, and b—h are part of the daily banter. You will find those words are used to belittle players, to weaken and feminize them, because hockey is hyper-masculine, meant for the manliest of men.

You think that you will never be able to live a happy, comfortable life as yourself and be involved in hockey.

F.Y.I. gay, Brock McGillis, hockey player. They are all synonymous.

I’m not here to tell you that everything is going to be fine and dandy, that when you wake up tomorrow all your problems will be solved. They will not. You have a long road ahead of you. I just know the way you are feeling right now, incredibly suicidal and depressed, and the fear of exposing yourself as a fraud is all-consuming, combined with the drive to continue your hockey career, it is a toxic mix.

In hindsight, you should be reaching out to your supportive family, but the fear of having them slip up and inadvertently expose your secret is so great that it feels like you can’t tell anyone.

But if you can, do me a favour:

Keep pushing through. You may not feel comfortable coming out right now – that’s okay. One day, trust me, you will come out and it will feel liberating. You will persevere.

As you find, on the ice you’ll be able to forget your secret, but soon your internal struggles will start to catch up with you and deteriorate your hockey career. I know that’s hard to hear because of your aspirations but based on your struggle, many of your injuries will be psychosomatic. You’ll have infectious mononucleosis (mono) twice, and you will begin drinking heavily to numb all the pain.

Remember this, there’s life after hockey.

When you reach 23 years of age, you will be playing hockey in Europe and the decision to finally come out will happen. But even at that point you will still be living a double life. You will go on a date with a guy and end up dating him for three years, but nobody in your life will know. You will be in constant paranoia. Even his friend will have an alias for you because you won’t want them to figure out you are a hockey player because you still have intentions of continuing your hockey career.

You will persevere, eventually playing University hockey at Concordia in Montreal.

Despite loving your partner, you will still tell him that you might have to sleep with women to keep up appearances. The relationship will end but will always be one of your biggest regrets in life. It will always hurt to think of how badly you wanted approval in a world that didn’t approve of you.

But soon someone will come into your life and put everything into place for you. That person is Brendan Burke.

Brendan, the son of Calgary Flames president Brian Burke, has already come out publicly as gay. He has his own NHL aspirations as an executive and you will reach out to him. Quickly you’ll become friends and it will feel amazing to be able to share your struggle with someone. He was so driven to create change in the way homosexuals are perceived in sports.

Tragically Brendan will be killed in a car accident on Feb. 5, 2010. Two days before his death you’ll exchanged messages on Facebook and he writes: “I can’t wait until the day that you’re out to your family like I am.”

Those were his last words to you.

The only person who will know you secret will be gone.

Shortly after you will find strength from Brendan’s words and tell your younger brother, who will be playing semi-pro in the United States at the time.

With his support, you will come out to the rest of your family. But not the hockey world. After all, your brother will still be playing, dad will be coaching junior and is a scout in the Ontario Hockey League (OHL), and you’ll have two cousins one in the OHL and the other in Canadian Interuniversity Sport (CIS) who might stand up for you and accidently out you in the process if someone was to use homophobic language in the locker room.

Eventually, when the injuries finally take their toll your hockey career will be finished. You will feel free and experience life as a gay man without judgement from the hockey community.

You will graduate from Concordia, and begin to work with athletes back home, helping them with on-ice and off-ice training. You will find incredible joy and happiness in helping hundreds of players reach their goals. Never divulging your sexuality to any athletes but always being quick to shut down any homophobic language used in your presence. You will become adamant about trying to change the culture of this hockey world.

A few things you will find out is that some of your athletes and parents already know you are gay. With a slight panic at first, you’ll start to realize how cool it actually is. Interestingly, you’ll start noticing kids apologizing to you for saying something homophobic. You’ll nod and move on.

A few things will push you and in November, 2016 you will come out to the hockey world.

People – who were considered friends – will no longer speak to you. You will lose coaching opportunities. It will be challenging being one of the first out people in this hockey community. But let me tell you, you’ve lost more friends and opportunities along the way because you weren’t yourself.

You are now a role model for those struggling just like you are right now and the outpouring of support since publicly coming out as gay is unbelievable.

I know it seems impossible to believe any of what I’ve just told you, but know this; one day, you’ll have the courage to celebrate the things you currently think make you weak. You will boldly and courageously continue to push through, you will one day carry on Brendan’s passion for trying to change the culture of the game, while being a mentor to kids and travelling across the country for those seeking support in this hockey world.