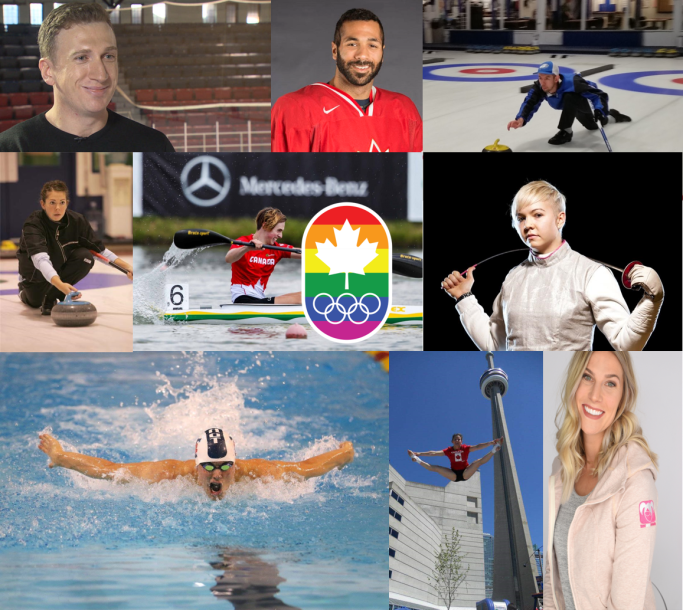 Over the last couple of months, the #OneTeam program has recruited 10 new ambassadors, let’s get to know who they are!

Shannon started fencing at 8 years old and has grown up in the sport representing Canada internationally at the Cadet, Junior and Senior levels. Competing in the Women’s Foil category, Shannon and her team have achieved a top 8 ranking in the world for the last three seasons; a best ever ranking by any Canadian Women’s Foil Team.  In 2015, Shannon and her wife, Meghan were married and have since welcomed their first child, Scarlett.  Becoming a mother has only increased Shannon’s commitment to becoming an advocate for LGBTQ inclusion not only in sport but all aspects of life.

“Once I learnt of the #OneTeam initiative I knew that I needed to get involved.  I want my daughter to grow up and play in a world that celebrates the diversity of her family. Being an elite athlete allows me to be a leader in my community and I am honored to be the first #OneTeam ambassador in my home province of Saskatchewan.”             – Shannon Comerford

Born and raised in Edmonton Alberta, Kieran grew up playing hockey and has loved the sport his whole life. Kieran played for the University of Alberta Golden Bears where he earned his bachelor degree of education and where he won a Canadian Interuniversity Sport Championship in 2008. Kieran has had to overcome some major challenges in his life. In 2007, he shattered his legs cliff jumping in Jasper, Alberta, which has led him to representing his country as a member of Team Canada’s sledge hockey team for 6 years. Presently, Kieran is back competing in the stand up world of hockey with the Stony Plain Eagles Sr. Mens AAA.

Kieran currently works as a grade 1/2 teacher and hopes to foster inclusive spaces in his role as an educator of young Canadians:

“As a teacher I see the importance of inclusion and making everyone feel welcome. The students I teach are so fragile and I want to be as prepared as possible to help give every student athlete the opportunity to have the same success that I have had” – Kieran Block

Matt is a competitive swimmer currently representing both the University of Toronto and the Greater Ottawa Kingfish. He has won multiple national titles, most recently winning the 50m Butterfly at the 2017 Canadian Swimming Trials.  Matt came out as gay to his teammates during his first year at university. The support and positivity he received form his teammates and coaches enabled him to begin coming out to his friends and family. He is excited to share #OneTeam’s message and help other LGBTQ athletes have just as positive experiences on their teams.

For over ten years, Una Lounder competed on the National Team in Sprint Kayak. She is a National Champion, World Cup bronze medalist, Pan American Games Champion, and 5x World Championship Team member. She has recently transitioned from competition into a more career-focused life, and is the National Events and Social Media Manager for Fast and Female – an organization dedicated to empowering girls through sports and combating high drop out rates for girls in their teens.

While training and competing, Una became aware of many of the barriers and challenges facing the LGBTQ community in sport through conversations with her close friend and teammate Connor Taras. She became keenly aware of the environments and sporting cultures that can make it difficult for LGBTQ athletes to feel comfortable and safe and hopes to be part of a positive change in Canadian sport culture!

After supporting One Team’s participation at the Pride Parade in Halifax this summer, Una decided that she wanted to get further involved and learn more about joining and supporting #OneTeam.

Zach is 19 years old and has been a part of Team Canada’s Canoe-Kayak team for the past 2 years, where he competes in the 200m KL3 category. Zach earned his first career World Cup medal in Para Canoe this summer in Belgrade, Serbia. Zach is an out athlete and wants to be a visible example to other athletes that may be afraid to be themselves. Zach is not afraid to be different and his courage is present both in and out of the water.

“Being a part of #Oneteam is very important to me because it allows me to be the person I never had growing up. I want to show people that you can be feminine and wear heels, all the while being a successful athlete in the male category. My ultimate goal in the next couple of years is to represent Canada at the Tokyo 2020 Games.” – Zach Fitzgerald

Brock McGillis is a former OHL and professional hockey player and is currently studying communication and sports administration at Laurentian University. Brock also works as a mentor, and provides on and off-ice training with elite level hockey players in the City of Greater Sudbury.

Brock is the first professional hockey player to openly come out as gay and has since become an influential advocate for the LGBTQ+ community.

Brock believes in equality regardless of sexuality, gender or race, and pays particular interest to the language we use and how we can shift it to become more inclusive. Looking ahead, Brock hopes to educate LGBTQ+ youth on loving themselves and developing strategies on how they can better accept themselves.

From a young age, Jenn has been passionate about many things, but no passion could ever compete with her love for sport. Jenn played a multitude of sports throughout her years in high school, and because of her dedication to sport, and commitment to being a leader, Jenn was named Athlete of the Year all 4 years of high school.

Jenn was introduced to curling in 1998 and with her first step onto the ice, she has never looked back since. In her almost 20 year career, Jenn has captured 3 provincial titles; participated in the Ontario Winter Games; competed at the CIS University Nationals; and was named Brock University’s Curling MVP in her final undergraduate year.

Through sport, Jenn has learnt to be a true leader and advocate, and has uses these tools as a means to promote positive change:

“The curling world has been very receptive of my sexuality, and the other curlers whom have come out before me. However, as a young athlete, I struggled to find the resources or role models to look up to for support when I was coming out – they didn’t seem to exist. It is my hope that in becoming a #OneTeam Ambassador, it will allow me to continue challenging gender normativity, while advancing inclusion in sport for everyone – especially the young athletes that feel they have no support.” – Jenn Minchin

Trevor Ritchie is a curler and former baseball player who has been actively competing in sports for the last twenty-two years. He is a former provincial qualifier in both baseball and curling at the junior level, and is curling this year out of the Prince George Golf and Curling Club in BC. Trevor is a graduate student at the University of Northern British Columbia, and is originally from Burnaby, British Columbia. Trevor is looking forward to spreading One Team’s message of inclusion and sport and working to create more LGBTQ inclusive organizations. Trevor hopes to use this platform to help connect queer people to sport.

Phil is an 18 year old Ski Cross athlete from Calgary, who currently races for Alberta Ski Cross on the NorAm circuit. Last year, Phil finished 9th overall on the 2017 NorAm circuit with a career best of 6th in Sunday River, Maine. Since middle school, Phil has been active in promoting acceptance and diversity in the general community, including that of sport, and looks to continue this through the #OneTeam program.

Welcome to the team everyone!