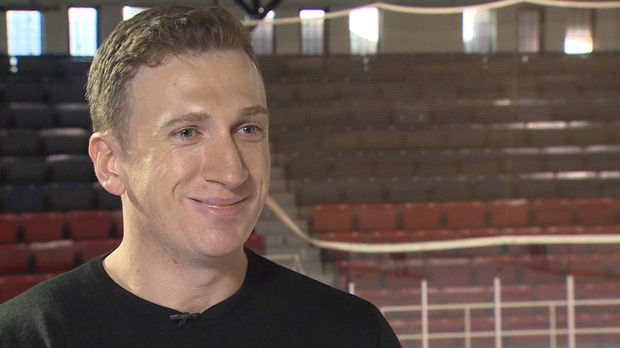 Brock grew up in a culture of hockey – minor hockey, the Ontario Hockey League, University Hockey, and Semi-Pro in Europe and the United States – but was never actually able to express who he truly was out of fear of never being accepted. He feared that coming out would cause loss of ice time or being blackballed from the game he loves and it all being over in the blink of an eye.

#OneTeam Ambassador Brock McGillis’ story is one of a battle with constantly having to prove his masculinity to his teammates.

For Brock, the fear of exposing himself as a gay athlete in the realm of hockey combined with the drive to continue a hockey career, was a toxic mix. He was trying to seek approval in a world that didn’t approve of him.

On the ice, Brock loved the game, he could forget his secret, however, without hockey he had no place to hide the truth. After retiring from the game and since coming out in 2016, the rewards have greatly outweighed the negativity. The start of this conversation in the hockey community is beginning to become more inclusive.

Attitude towards homosexuality in hockey is changing – but there is still so much more to be done. There are or have been openly gay players in lower levels of hockey and in other hyper-masculine professional sports, like football, but not the NHL.

A fist fight in hockey is quite alright on the ice, but not off the ice. Players know they can act certain ways, in certain contexts, in certain environments. For instance, within the dressing room, it is normal to use homophobic discourse, such as calling one another names or calling something gay.

These are the very acts that Brock struggled with.

“Hockey is very insular, a world within a world and these players are policed within this world. Not living to the same standards as the rest because your friends are all hockey players.” Explained McGillis. “As you move away from home at a young age and your world or large portion of that becomes solely hockey, everyone starts to copy each others language, they begin to walk the walk.”

As Brock shares his story to youth in schools, corporate organizations, and sport teams from minor hockey and other various levels across Ontario, his simple message is to educate and engage. He has realized that there can be a shift in the culture. It’s just going to take some work.

Fortunate enough as he was to have played such high levels of hockey he hopes that people will begin to take notice of his story and make hockey a safer space for everyone.

“I call it my change the world mandate” said McGillis.

“I want to push our evolution to evolve at a quicker rate. We’ve got to a point where things are more subversive and hidden but it doesn’t mean that its shifted. Our younger generations are more open to the change, but their language hasn’t evolved,” Brock continued. “My goal is to have them understand, I wasn’t bullied as a kid, I was the cocky hockey boy. Yet, I wanted to die everyday. Having them recognize that I was one of them, I was their peer in that locker room with them, I was their buddy, yet, internally I was struggling. They could be affecting their best friend, or their teammate without even knowing. Without knowing, this could affect the performance of their team. They could have family who identify as LGBTQ. These are the impacts I try to relate with when I speak.”

Brock’s main objective is to shift the language; starting with youth.

“Words have so much power. It’s going to be the coaches, management, players and parents that have to recognize it at the grassroot levels,” said McGillis. “If you can change the culture with kids, then by the time they get older it hasn’t been a product of their environment. It hasn’t been ingrained in them.”

“This whole idea of normal and this hockey culture is all fake. Why conform to it. Be yourself,” paused Brock. “It’s not about attacking the hockey culture, its about finding ways to educate, engage, and relate with someone. We are all different and we all have different things we enjoy.”

The more we talk about it, over time, the more it will be improved.

For this reason, Brock’s message has such significance and power for the #OneTeam program and You Can Play. He leads with his voice and experiences. When we educate and engage it allows us to be open with ourselves in a sport that has so much to offer. It allows acceptance of more inclusive sport.