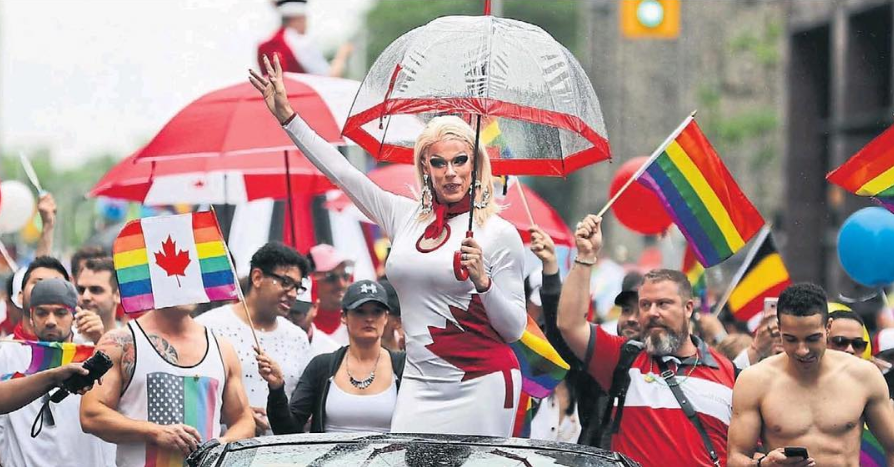 Pride has always had an element of performativity to it. As a collective, being proud of who we are, being someone who passes along the mic to people who need to speak of their experience. That is what drag queens have accomplished. A very real accomplishment that has come within the community, the amount of success that LGBTQ people can grasp for themselves right now.

For this small town Northern Quebecker from Mount-Laurier, Jason Pelletier, who goes by the drag queen alias of Jezebel Bardot, has now lived as a Torontonian for the past six years. “Taking ownership” of her francophone identity, she has created her own emotional art. And she’s showing no signs of slowing down.

As a former gymnast and power tumbler for Canada’s National team, and now working in education helping to run the French school boards safety and inclusivity department, three years ago, something was missing.

Now, as a performer of drag, Bardot has worked with some of the largest worldwide industries such as Netflix, Air Canada, Google, Microsoft and Telus.

“Gymnastics is a sport but also an art. When gymnastics came to an end at twenty-six (now thirty-one), it was two years without really doing anything artistic or creative,” continued . “I found a lot of commonalities with drag and gymnastics as well as sport in general. Like gymnastics I would work weeks on specific skills; a flip, trick or combination, meanwhile in drag I had to learn makeup, hair, sewing, and a bunch of different skills that acted as a replacement to my creative side and in a way became my sport as a performance is like a routine.”

With an athletic component in her drag, for the three to five minutes of manipulating the audience, she begins slowly, acting as a temptress using captivating music and sells that illusion of “what are we going to get here”. Next thing you know, there’s wig reveals, flips and you’re thinking “what just hit me”.

Coming from a small town, Bardot came out at the age of fifteen and was always strong in sport. Whether it be volleyball, hockey, or having a black belt in Taekwondo, she would always be able to keep up if not shine but she knew that she had to assimilate to the culture of sport.

“I hate to use the word assimilate with straight sport, but It was important for me to play. It helped me grow and become more resilient. I knew from a young age that there’s a certain amount of bullying and homophobia in sport, but I also believe that gay people need to have a clear line between themselves and bullying. Knowing your limits is important. Sure, I’d get frustrated, however, I personally would stand up to the bully. Making a joke, pushing back in a non-violent, non-threatening, non-bullying way or reporting it are good options to deal with this. It may not work for everyone but for me, ruffling my feathers wasn’t a bad thing. It built character. Never stand in silence,” explained Bardot.

Standing up to the bully allowed Bardot to be herself which was always that gay flamboyant kid. “My mom was someone that I always looked up too, her, and some aunts were always dressed up to the 9s with their hair, makeup, perfumes,” said Bardot. “I was surrounded by women who were always put together, which I was attracted by.”

It was at this time, age fifteen, that she first witnessed drag.

“I recall driving down to Toronto for the “homo-hop” which was an all ages kind of night where they always had drag shows. There was an old premiere entertainer, who was a big ambassador for the community, Chris Edwards, she was trans, and she always welcomed people to the community as she called it the art of female impersonation more than drag within itself. Watching her when we went to those events I would always think ‘what a fascinating world’”.

What began as a joke, impersonating the famous comedian, actress, writer and television host, Joan Rivers, ended with finding an intense passion and a know that drag was for her.

“I was hosting a volleyball banquet after a tournament as Joan Rivers the first time. I had a plan A, which was a comedy skit about 20 mins, either it goes well, and I go through my monologue or plan B, I call it short and go straight to the awards calling it a night. I knew drag was for me when people were crying laughing around me and I just felt like I was in my element. My friends had some videos that were sent out and within weeks local clubs called and wanted Joan Rivers. It started off as a one-off thing to make my friend laugh and now I’m sitting on about eighty-five wigs for my shows,” laughed Bardot.

As drag has evolved over time, as an art form and as a purpose to what it serves for the LGBTQ community, Bardot embraces the direction drag is taking.

“Drag was really underground not long ago, and now we have TV shows about it. I go to work, I don’t care what people think, I go to women stores, I buy shoes, bras, makeup and nobody bats an eye,” expressed Bardot. “What is important to hang onto is the old school purpose of drag. Back in the day those drag queens were the brave ones in the community, and you would have these drag queen to make you laugh, to joke about things, to make you forget about how crummy the kind of situation that you are in right now. I think for me, night in and out, my goal is to connect with the audience either before, or after a show. If I can give that person who may have had a rough day a little bit of a vacation, then I did my job.”

For many people, on the surface drag is something that is pure entertainment, however understanding the way it can be linked to real community-shifting work is what inspires this art. More importantly, art can create spaces where conversations can happen.

For Jezebel, the #OneTeam initiative has “been great to connect with other LGBTQ and ally athletes as well as a community out there. I’ve helped Kris Burley with surveys on his approach with Gymnastics Canada and LGBTQ youth on how to best protect them based on my experience in the sport. I think these conversations and to be in the loop is so powerful and it shows that we are there, we are known, and that is encouraging.”

“I hustle, I am tired, my feet hurt, and I have no toe nails in between volleyball and wearing women shoes but I absolutely love drag and get so much satisfaction about what I do.” – Jezebel Bardot.