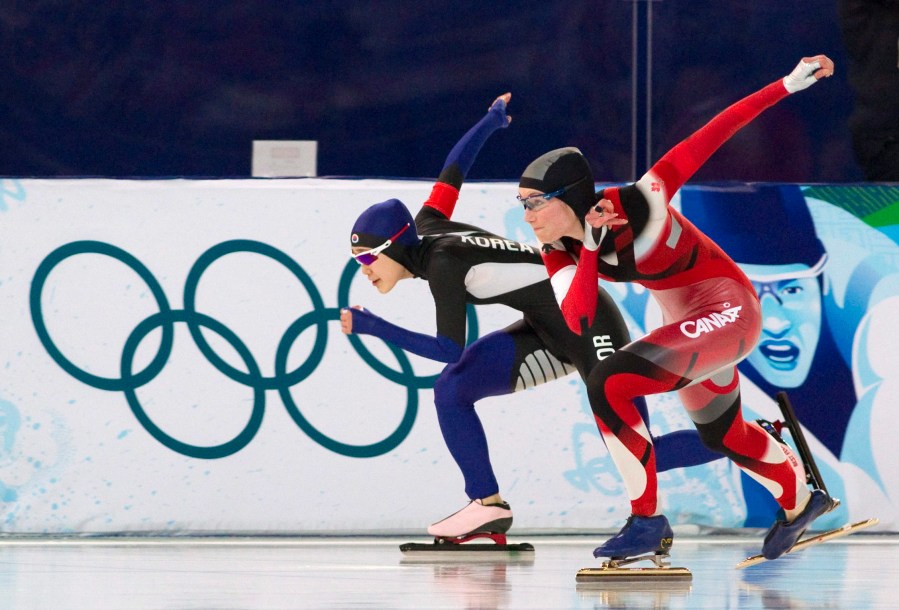 Long-track speed skater Anastasia Bucsis, a two-time Olympian, is just trying to be the best she can be in every situation. As a recently retired Olympian, Anastasia understands the struggles of coming out and of mental health. In fact, this is an experience she has dealt with throughout her career and now, the transition of being a retired athlete.

Anastasia has had the great fortune of chasing her dreams of speed skating and celebrated the beauty of sport wearing the Maple Leaf. She has felt some of the highest of highs, and some of the lowest of lows. Years prior to the lead up to the Sochi Games, the loneliness she felt was a feeling she didn’t want others to feel. That’s exactly why she came out – at the time, as the only Olympian in North America still competing to publicly come out as gay.

“I was incredibly lonely and unfortunately it took a huge toll on my mental health. I struggled with anxiety and depression for years. It’s funny how happiness is an inside job. I’m the first person to say I have the best family, the best friends, the best teammates, I live in the best country in the world. However, I still struggled to accept myself to the point of having very unhealthy and negative thoughts. I lost hope. I was hopeless for years. Regardless of orientation we all feel lonely; it’s one of the tough things about being human.” 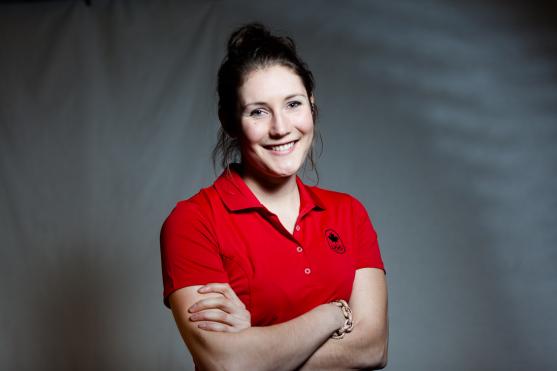 As a #OneTeam ambassador, Anastasia recognizes her role in building inclusive communities and has learned by reaching out to others for help. “I am the product of very courageous leaders like Mark Tewksbury and Brian Burke. From gay, straight, allies, I’ve been very lucky to have people surround me and say that it’s okay to be your authentic self, that’s where your power lies. I don’t identify as the first (to come out) but I do identify as the very fortunate product of strong independent people that celebrate diversity around me. If coming out or joining the COC and #OneTeam initiative helps to end any stigma or if I can make any one feel as they’re not completely alone in this struggle, then it’s the highest honour.”

Anastasia believes that life is a team effort. You never know what may be going on inside of someone’s head and we all struggle. In her retirement, Anastasia hopes to continue to bring some of that positive energy and inclusiveness to the community and Canadian sport landscape.

As her career was short-ended by a chronic knee injury since Sochi, she has admittedly lived in her shadow on the ice, unable to set her sights on the 2018 PyeongChang Games. However, she continues to seek out help and be a resource to others who struggle. 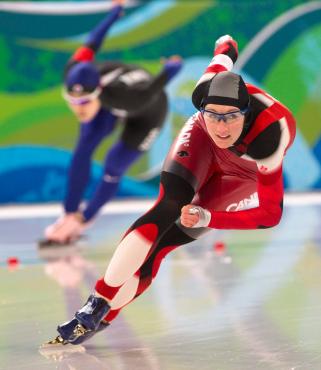 “I thought to myself I want to be able to kick a soccer ball with my kids when I’m 40. That’s why I retired. My last race was in January 2017, it was incredibly heartbreaking, it was probably the most vulnerable moment of my life aside from coming out to my parents. It’s such an identity shift, speed skating is the love of my life. Aside from my relationship with myself and my parents, it’s the longest most passionate relationship I’ve had. For someone who has admittedly struggled with anxiety and depression throughout my career (primarily when I had come out of the closet) I had to take huge proactive measures to place that at the forefront. To make sure I had my ducks in a row to make the transition easy. Being able to be a part of something bigger such as #OneTeam, working as an RBC Olympian and with Speed Skating Canada really has helped the transition.

Since her announcement of retirement, as a #OneTeam ambassador, and You Can Play board member, her aspirations for a future built on inclusiveness and diversity is driven by her experiences. “Right now, I’m working with Speed Skating Canada and it’s wonderful to give back to a sport that has given me so much. I recognize that, the only thing I can say is that I try my best in every single situation. That’s all you can really do. I have my degree in Communications and I would love to get into the media. To get involved in content creation around sport, that is my passion.” 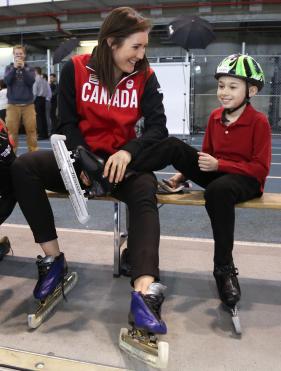 Anastasia Bucsis helps Jackson Jones, 8, on with his skates after the long track speed skaters were formally nominated to the Canadian Olympic team for the Sochi 2014 Olympic Winter Games in Calgary, Wednesday, Janurary 22, 2014.

“As a leader, the only thing I can be is myself and speak my own truth. If people want to hear what I have to say then that’s a wonderful feeling and if they don’t, hopefully I can lead by example. With retirement, you recognize that people forget a lot of things besides the fact of how you made them feel. Regardless of orientation or how you identify, it’s spreading that narrative of acceptance and love and that you don’t have to go through life alone. And that understanding is a lifelong process and lesson. Sport is at the heart of my life and so I will continue to stand up for what I believe in and to be good to people.”

Anastasia’s message is this “Many of my friends, and teammates – not just in speed skating – have had added stress with it being an Olympic year, and there’s no better time to highlight the importance of mental health and being proactive with your mental well-being. I lacked a role model to help me make sense of my own identity when I was coming out of the closet. It was very scary. I struggled to reach out to anyone that I didn’t really know. For people who are struggling to come out of the closet or someone who is struggling with mental health issues… I want them to know that they are not alone. As much as I am just one person I can be that resource of help. To be able to give back to people, and to the sport I love, it’s the highest honour. We’re all lonely, we all struggle sometimes, and life is so much easier if we don’t go about it alone.”