At the Vancouver 2010 Olympic Winter Games, Eric Mitchell had risen in the ranks of ski jumping to become a Canadian Olympian. To this day, Canada has never won an Olympic medal in ski jumping, yet at the Olympic Games Mitchell surpassed expectations. At the young age of 17, he had been fortunate simply to be part of the Vancouver 2010 Games. As his sight set for Sochi, he had the potential to compete again. However, as time passed, something increasingly held him back from his full potential. As a growing rift began to build inside him, the truth of who he was ate away at him. 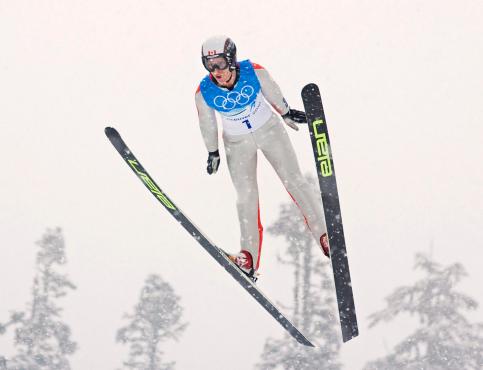 “I refused to acknowledge that I might be different in terms of my sexuality and I did not allow myself to embrace that. Quite frankly, I was in a culture that was dominated by heteronormalize activity and homophobia, it was casual, none of my coaches, none of my teammates meant any harm but it was not a safe space for me to be myself. I was very focused on sport and I was determined to not have any distractions. The way I saw it was that any deviation from the norm would be a negative for me and would impact my performance poorly”.

It wasn’t until Mitchell had retired and was speaking with John Fennell that his eyes opened to the importance of his own visibility and advocacy. As they shared their experiences, one questions arose; “How did we feel so alone when we were in the same spaces as each other? We were in the same training centers, but refused that being gay was a part of us, and we didn’t have any resources to help us. For me, I didn’t find any mentors until I had started to come out with the COC and the #OneTeam program, that’s where I started to connect with leaders in this space and started embracing who I was”.

When the Canadian Olympic Committee created it’s #OneTeam campaign – Mitchell was eager to join. As one of the founding ambassadors, Mitchell has now hung up his skis. With his dreams of a second Olympics in the rearview, Mitchell now focuses on his career and how he can give back to sport.

“Looking back, I wish I could’ve been true to myself while competing but at the same time I feel now I have learned lessons that I can help others with and I feel empowered to do so. When I look at this program, it’s a place where we can continue to make big strides in the sport community and the LGBTQ community. This is an initiative that’s obviously very close to my heart because it’s an initiative that’s affected me throughout my athletic career and has shaped my post retirement life in sport. It’s a way for me to give back to young athletes who are still discovering themselves as well as trying to achieve those wild dreams of going to the Olympics”. 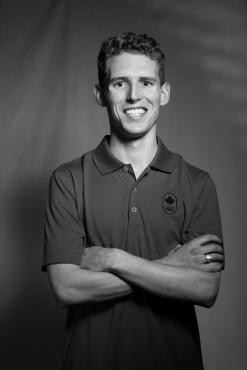 As a #OneTeam ambassador, Mitchell is continuously inspired by how the Canadian sport systems has made strides in regards to making spaces more inclusive. “I’ll do one event and I’ll see 3 more opportunities come out of it. So, in that respect, it’s still an important issue to talk about and there’s a lot of engagement to share our message”.

In his most recent talk, Mitchell was motivated by what the kids were asking. “The questions they were asking like how do we do introductions, how do we make everyone feel safe right from the beginning, would we ask somebody to identify as LGBTQ or would you let them come to you. These were real questions. That sense of awareness makes me feel good, they’re seeking out knowledge on how to make their spaces more safe and inclusive for LGBTQ people”.

Mitchell’s sincere desire is to provide all LGBTQ athletes with the resources and support they need to come out as their true selves while participating in the sport they love. Although there is limited statistics of the involvement of LGBTQ individuals in sport, Mitchell is passionate about continuing the conversation and sharing his experiences.

Eric and the #OneTeam at the 2017 Toronto Pride parade

Just this past weekend, Mitchell attended Toronto Pride and is looking forward to attending Calgary Pride for the 4th consecutive year. “Taking part in pride every year is important to me. It’s a chance to show that athletes are in this space, we are here for support and it’s a celebration of who we are. This is an opportunity to invite groups who don’t necessarily think sport is for them into the Canadian sport system”.

As a recent University of Calgary graduate, Mitchell is focused on building the tools that he can bring back to sport. Specifically, he is working hard to complete his Chartered Professional Accountant (CPA) designation as well as gaining practical experience for financial reporting and strategic management planning.

“I hope to be able to bring these business skills back to the sport landscape, to create value for the sporting system that has already given me so much. The reason why I’m so passionate about doing that is because I know that sport does have the power to create change in society. I hope to provide the insight and address the areas that can be improved in an already strong Canadian sporting system. To develop the skills that I can now within my professional area and I can apply down the road to deliver value for the sport system and allow programs like #OneTeam to prosper in the future”.