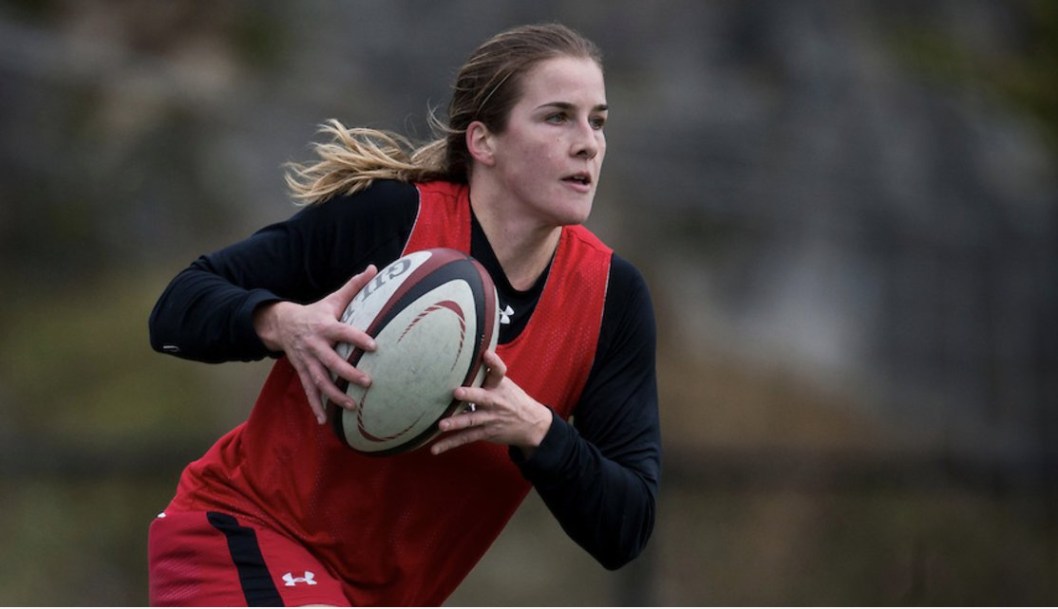 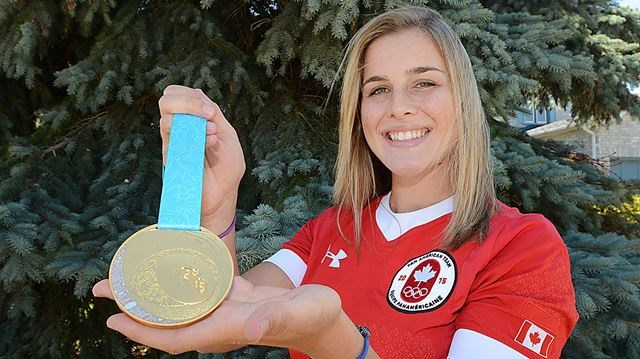 Nadia Popov’s journey as a #OneTeam ambassador involves sharing her story of mental health and LGBTQ inclusion in sport. Although they may seem like two separate passions, there are many parallels between the two. From a gold medal at the Toronto 2015 PanAmerican Games Rugby 7’s to heading back to Queen’s University to fulfil a dream of attending medical school, this is her story.

As an athlete, Nadia’s greatest struggle was her battle with depression. “I struggled to believe in myself, because I had a voice in the back of my head that was always telling me I wasn’t good enough. Many physical symptoms of depression, like feeling constantly tired and losing my appetite all together were challenges for me. Being chronically exhausted and having trouble eating impacted my ability to perform as a national level athlete training 6 days per week. It took a lot of time to re-work my negative thoughts and to see them as the faulty logic they were, but with the help of therapy, mindfulness and the support of those close to me I could heal. I still struggle with my mental health from time to time, but I’ve developed the skills to be more proactive about keeping myself as healthy as possible”. 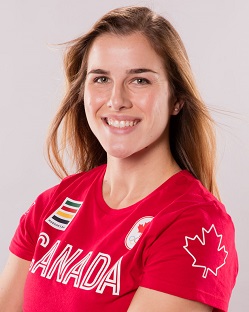 It was in December 2015, the Canadian Olympic Committee (COC) held an Olympic Excellence Series (now renamed Olympic LAB) event where they brought Olympians and Olympic hopefuls together for a conference in preparation for the Rio 2016 Olympic Games. “I had just listened to Clara Hughes give a powerful speech to a room of athletes and support staff, and briefly met her afterwards and thanked her for sharing her struggles with mental health, noting her bravery had given me someone to look up to as an aspiring Olympian”.

Coincidentally, that day Nadia met the COC’s Education, Youth and Community Outreach team and signed up to get involved with the #OneTeam initiative. “Walking by the #OneTeam booth afterwards, I saw the opportunity to get involved with something I cared about, and to be a role model for LGBTQ athletes in the way that Clara was a role model for my mental health. Athletes struggling with mental health or their sexuality (or both) often feel immense pressure to keep their struggles hidden due to fears of not being accepted, and how that will impact their athletic dreams. For me, getting involved with #OneTeam and through You Can Play, has given me an incredible avenue to give back to sport, and has provided me purpose through the difficulty that came in choosing to step away from the national team program”. 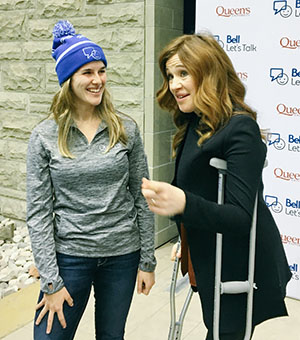 Nadia and Clara speaking out to help others at Queen’s University.

As a #OneTeam ambassador Nadia’s has been honored to be a part of a journey that has opened her eyes to the struggles many LGBTQ athletes still face in sport. “I became involved because I wanted to contribute stories of hope to the conversation, and to support those who struggle to gain acceptance in their given sport. My experience as an LGBTQ athlete in the women’s rugby community has been overwhelmingly positive, and my teammates had a significant role in helping me accept myself and my sexuality. My sport gave me a safe space to discover who I was, which is what sport should be for anyone who is struggling with their identity. However, sport still carries deeply embedded gender norms as well as expectations of sexuality. It’s important to educate athletes, coaches and fans at all levels that language matters and that stereotypes are harmful. Athletes who compete in sport that defies traditional gender norms often deal with stereotypes assuming homosexuality, while athletes who compete in sports that reinforce societal gender norms often face greater stigma if they defy the expectations of heterosexuality. In my experience being a bisexual female rugby player, I’ve dealt with both sides of the issue. When my girlfriend came to watch my games, I was very aware that I was reinforcing the stereotype that all female rugby players are gay and there were a lot of assumptions made about my sexuality. Now that I’m single, people often assume that I’m “confused” if I don’t consistently fall on one side of the spectrum or the other. Sexuality is complex and I want other athletes to know that it’s okay to be anywhere on that spectrum and that their feelings are valid. Love is love and that’s the only thing that should matter. In sport, the only thing that should matter is your commitment to being the best athlete and person you can be”.

When CBC first published an article of Nadia’s story, sharing her experience was a difficult decision for her to make, however it turns out it has opened many doors for her with mental wellness. “I didn’t know what to expect when CBC approached me to share my story, but I was flooded with support from people across the country and the world and it made me realize how important it is to continue to be visible and engage in the conversation on mental health. Being public about my struggles gave me the opportunity to help others who felt comfortable sharing their struggles with me, and while every one’s journey is different, it was an honor to just listen and let them know that they were not alone”.

“When my mental health first started to deteriorate, I isolated myself from the people and things I loved and it made me feel unbearably alone. Once I began opening up to those close to me, seeking professional help for my illness, a weight was lifted off my shoulders giving me the energy I needed to get better. I want to continue to be vocal and visible in the conversation, especially when it comes to mental health and sport. We can do better to support our athletes, from little league to national teams, and that starts by creating an environment where it’s okay to be vulnerable and talk about it”.

As Nadia continues as an ambassador, her aspirations for academic excellence, and contribution through #OneTeam and YouCanPlay motivates her to inspire meaningful change. Her dreams of a medical career will give her the opportunity to fight for equality and for all Canadians to live healthy and fulfilling lives.

“I will always be involved in sport, as I truly believe in its power to improve people’s lives, both physically and mentally, and I would like to see a world where everyone has access to sport and physical activity early on. I don’t know exactly what direction my life will be headed following my graduation in the spring, but I do know that I am open and excited for whatever opportunities come my way.”