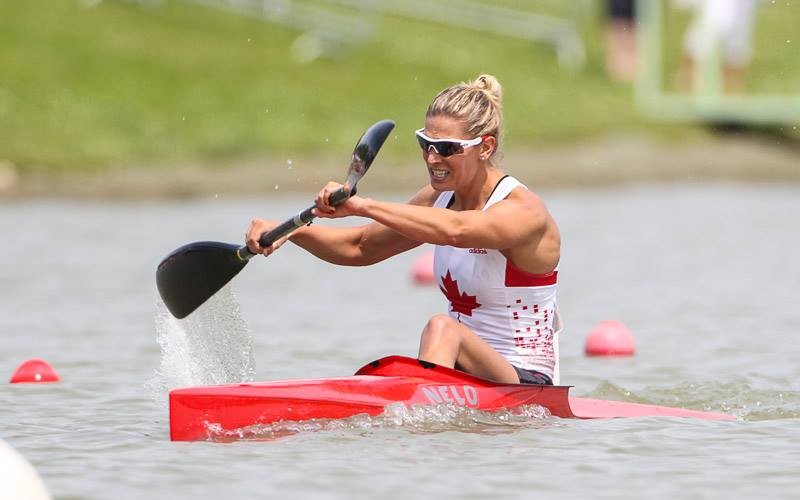 There are a lot of ways to be a great “ally” and many misconceptions as well. An ally is described as someone who believes in the dignity and respect of all people and takes action by supporting and advocating with groups being targeted by social injustice.

Una Lounder is a National Champion, a World Cup bronze medalist, Pan American Games Champion, 5x World Championship Team member, and now a #OneTeam ambassador. Based on her experiences, Una shared some important things to keep in mind when it comes to being an ally.

Una’s motivation to get involved with #OneTeam came from her best friend and long-time teammate, Connor Taras. Connor and Una both made their first International team together in 2005, and were on the Sprint Kayak National Team together for many years. Connor, who is also a #OneTeam ambassador, courageously came out in a very public way toward the end of his career, and in Una’s words, “gave our sport a great gift – the start of a very important conversation.”

Connor’s willingness to share something that had been so difficult for him with a big audience inspired and moved Una, and in 2016, she presented him with his retirement plaque, which is given in appreciation to all the athlete has contributed to their sport, where she spoke about his journey as an athlete and an inspiring role model.  In 2017, Una helped to coordinate the #OneTeam contingent walking in the Halifax Pride parade and decided that she wanted to get involved!

Now the #OneTeam ambassador and former National Team athlete works for Fast and Female, whose mission is to empower girls through sport by connecting them with strong female athlete role models and to combat high dropout rates for girls in sport. Her involvement with #OneTeam came from a desire to build up the ally and role model culture in sport. The more people who have the courage to speak out, the louder the conversation becomes. Una hopes that by being an active ally, it will invite more people to join the conversation and for this reason, she is sharing these points on how to be a good ally.

“As someone striving to be an ally, listening and being approachable is a key element that can be overlooked. You can often think, “I’m a nice person”, or “I’m friendly so why wouldn’t someone feel comfortable around me?” but subtle things like the language you use could prevent someone from reaching out or approaching you for support. Personally, one of the things I became aware of in sport environments is that often people may have a great personal relationship with someone and feel like they’re an ally to them, but they may not be creating a safe space in terms of their language, or the jokes they tell (or laugh at). It’s all encompassing. Being an approachable ally is as much about listening to yourself, as it is listening to others.”

“Sometimes it can be a challenging point because you might feel that being an ally is simply taking on a silent supporting role, and it really should be an active one.  You have a choice about whether or not to speak up in situations where someone is creating an unsafe or exclusionary environment. If you want to act in solidarity, you cannot simply retreat when you don’t want to engage. Being an ally means being a visible supporter. It’s making sure that when you are in a conversation or scenario where you don’t feel comfortable, or you recognize casual homophobia, to make sure that you speak up. Standing up for what you believe in and what is right, is important.”

“I am personally looking forward to learning more through #OneTeam and YouCanPlay about current issues, scenarios, policies and how I can be a better ally. I certainly don’t know it all, and I’m okay saying that. We need to educate ourselves about the issues facing those we want to be allied with and should not necessarily expect those individuals to teach us. It’s okay to say you don’t know everything, and that you want to learn more. One of the most important types of education is listening and finding resources around you to further your knowledge and understanding.”

“Make sure you understand that you are there to support and give voice to the LGBTQ community when you become an ally. Your friends and teammates, or other people around you, are the ones who are most important during their process of coming out and voicing their experiences. As much as you may want to change culture, and act on things you are learning, you cannot speak for other people. It’s important to ask yourself, “how do I support someone and let them know that I’m here for them without presuming that I know their reality? Relate, support, and empathize with them but remember that it’s not about you. Though some scenarios call for action, allies don’t always need to be in the spotlight.”

“To me, this is one of the most important points. It’s never too late to become an ally. It’s never too late to say sorry. It’s never too late to change your attitude or contribute to changing the culture around you. Sometimes those realizations come from making a mistake and being open to learning from it. A lot of ally stories illustrate the importance of being sensitive to language because what you may not realize as a young person is that your mind is going to change, you are going to learn more, and you’re going to be exposed to so many wonderful people in your journey. You may not realize you’re hurting others with your language, comments, and jokes and it will make you a better person and a better ally if you can accept and act differently moving forward.”

”Patience and openness are important, but again, it is not about you. You’re a part of the journey but it’s not your journey – especially when it comes to someone questioning or exploring their sexuality. You need to be patient in terms of letting people deal with things in their own time and by being supportive of their journey and how and when they choose to share it. When Connor decided to share his sexual orientation with me, it was a big moment for us because it meant that we could have different conversations and talk about things both in our sporting and personal lives on a different level. However, it was during a time where he wasn’t comfortable coming out to everyone publicly, so it was important that I be cognisant of his choice and his wishes of who he wanted to share that with. When he decided to come out publicly, I was so happy that he felt comfortable enough to share his true self with everyone, but I also understood that it was his choice to come forward about that.”

“One of the themes in sport that has come out in terms of homophobia is that athletes don’t feel safe or comfortable in many sport environments. This means that it may be hard to come to practice, make friends, to perform at your best every day, or even to feel that you want to come back to sport at all. It’s so hard to perform at your best when you feel that you can’t be your true self. So, in a lot of ways being a good teammate is allowing and encouraging your team members to be their true and best selves. Your teammates will be able to perform at their best if they feel comfortable. After learning more from Connor, it became very important to me to make sure that he, or any other athlete would feel comfortable to be their full selves within our team.” You Can Play’s vision illustrates this point so well, “You Can Play believes sports teams should focus on the athlete’s skills, work ethic, and competitive spirit, not their sexual orientation and/or gender identity.”

This list is just a start, and that is one thing Una understands well. She is committed to continuing the conversation that Connor started, and she is excited to learn more on how to be an effective ally.