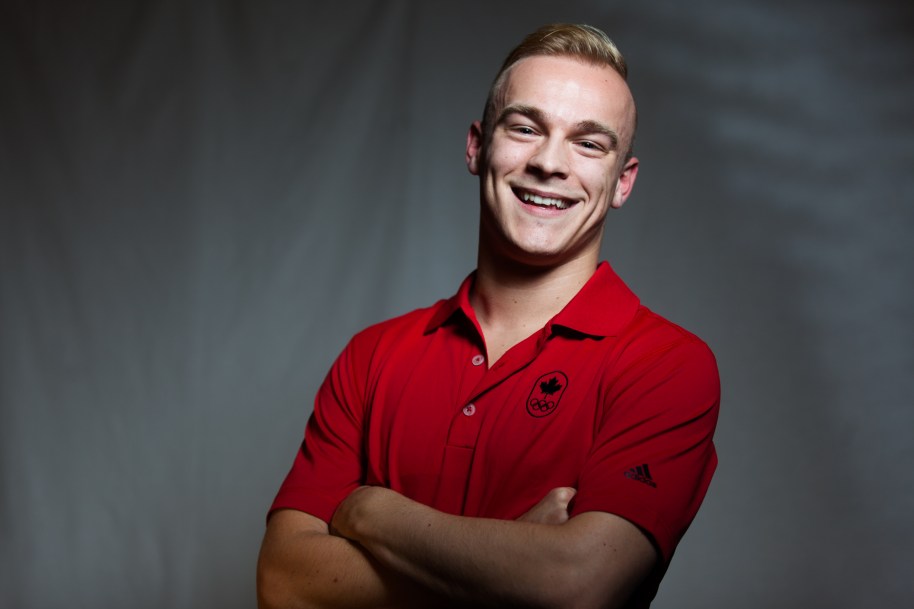 As Vincent Lavoie stood in the corner of the sprung floor at the 2013 World Championships for Gymnastics Tumbling, his legs squeezed together and his arms at the sides, rigid from shoulder to fingertips, he took a deep breath and cocked his chin slightly, as he launched himself into a hard-tumbling pass. Adrenalin pumping, getting more air than ever, and the timing exactly right, it was the first moment in sixteen years that a Canadian male tumbler would be moving onto the finals. It was the proudest moment in Vincent’s athletic career.

At the young age of 8 years old Vincent had fallen in love with gymnastics. A deep, consuming love. As a tumbler, he was fearless. The tenacity of learning to do a trick cleanly, with straight legs and pointed toes and no wobbles on the landing may sound a little crazy to some, but this is just another day in paradise for these wild children of the gymnastics family. And for Vincent, he considers himself lucky to be a part of that.

“It always felt like an open environment for me to express myself and I never felt like homophobia was a big deal,” continued Vincent. “Yes, there were people who would make you feel a certain way, but there weren’t as many as the people who would be there to support you. When I walked into the gym, I was Vincent and I do tumbling, I’m not any other person and I just do the best I can, it didn’t matter how I identified.”

For the #OneTeam Ambasssador, he never felt like he had much of a struggle coming out in his sport. Being himself came naturally in the gym which is the drive that combines his compassion and efforts to want to make a change for others to be able to be their true selves, the feeling which enabled him to compete at his best everyday.

“I don’t see why anyone should have the feeling of not being able to come out and be your true self,” Vincent paused. “I want everybody to be the best they can be in their sport like I did. It really affects me hearing the stories of others that had a lot of struggle, without hope, love and support, that perhaps impaired their performances on the field of play. This makes me want to provide that same safe environment I had to the new generation.”

Vincent first found out about the #OneTeam program in 2014 at the World Pride Parade in Toronto. Lifelong friend and national team coach Dennis Vachon, and Vincent were both walking in the parade, as they received an introduction from a COC representative. They talked about the importance of these conversations of inclusiveness, education and the efforts in place to create safer environments. From that point forward, he knew he wanted to make change and be part of the difference.

Since retirement, for the past three years, Vincent has moved on to perform with Cirque du Soleil in Orlando, Florida. In the same light of the gym, the company has allowed its LGBTQ performers to have a voice and take a stand against any effects of social exclusion, and hinderance of people considered to be different.

However, as he packs his bags and begins his journey back home for an extended period of time, as a performer, he is thrilled to continue working for a company that has allowed him to feel free and extraordinary in every way.  As a #OneTeam ambassador, he is excited for the opportunity to get more involved and provide a vision for other LGBTQ athletes in search of finding a comfortable place in their life.

“The more people know, the less they are afraid, and the more “normal” it becomes. The only way to create positive change is through visibility and representation. I’m most proud of Canada for all it has done in PyeongChang with its Pride House and allowing this #OneTeam platform to inspire people to be free and compete confidently such as I was able to with all my sport has given me. Something I wish to give to others.”