Alyson Ackman is no stranger to adversity. She left her home in Pembroke, Ontario at age 15 so that she could train at the Pointe-Claire Swim Club, but lived in less-than-ideal circumstances. At the 2011 Canadian Trials she suffered a dislocated shoulder after an errant fly-kick from the swimmer next to her, but still competed. It was at the 2012 Olympic Trials when she made the 200m freestyle final that she realized her Olympic dream had true potential. Ackman’s breakthrough came in 2014, when she qualified for the Commonwealth Games and Pan Pacific Championships. In Glasgow she won silver and bronze in the freestyle relays and made the final of the 100m freestyle. She added a 4x200m freestyle relay bronze at the Pan Pacs. Competing collegiately at Penn State, Ackman owns school records in the 100, 200, and 500 freestyle events and has received a total of 10 All-America honours. She won a pair of medals at the 2015 Pan Am Games, including gold in the 4x100m freestyle relay. She made her FINA World Championship debut that same summer with the 4x200m freestyle relay.

A LITTLE MORE ABOUT ALY

Getting into the Sport: Learned to swim at a summer club in Sainte-Anne-des-Lacs… Joined swim team in Sault Ste. Marie at age 8… At her first meet she was so terrified her dad had to empty her tears out of her goggles… Outside Interests: Earned Bachelor of Science in Kinesiology at Penn State University… Tries to relax by drawing but is usually too busy with schoolwork… Enjoys reading, writing watching movies and skiing, but usually not allowed to do the latter because of risk of injury… Works as assistant at Sport Performance Therapy (massage therapy)… Volunteers with PAWS, walking and feeding shelter dogs… Odds and Ends: Favourite quotes: “To be inspired is great, to inspire is incredible” / “Getting lost will help you find yourself” / “Don’t wait for the perfect moment, take the moment and make it perfect”… Nicknames: Aly, Tiny Hands… Always travels with a small Canada goose plushie named Gus… 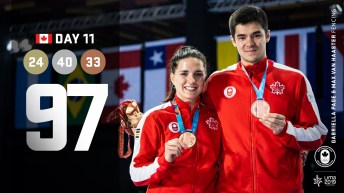 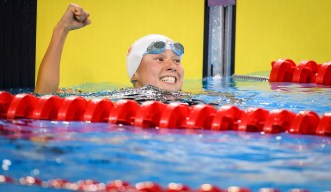