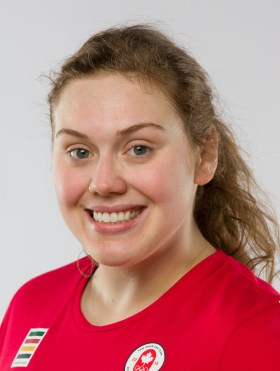 Amanda Desnoyers has dreamed of representing Canada since she watched the Olympic Games on TV as a child. In 2013 she was part of the Canadian team that finished ninth at the Pan American Championships, defeating Costa Rica in the final classification match. Desnoyers has two consecutive senior national titles with her club team and was named 2014 Quebec League Player of the Year.

Family: Father Guylain Desnoyers and mother Angela Noble… Getting into the Sport: Started playing handball at age 8… Her father had also played and was her first coach… Outside Interests: Enjoys being outdoors, reading, and listening to music… Works with disabled children… Has applied to the nursing program at McGill University… Odds and Ends: Favourite motto: “Everything happens for a reason”… Role model in sport is Michael Jordan… Always gets dressed the same way on game day…