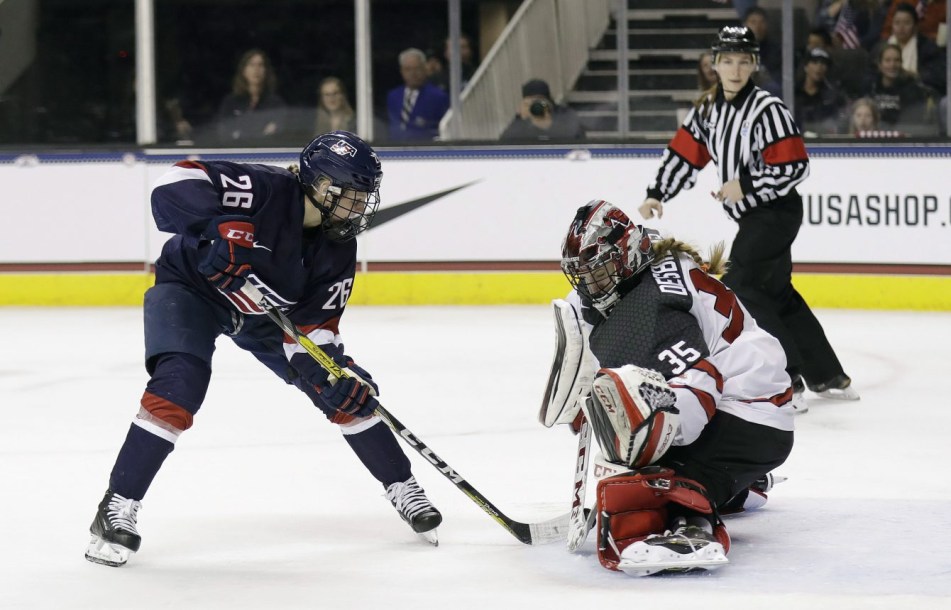 Ann-Renée Desbiens started Canada’s opening game at PyeongChang 2018, earning an 18-save shutout against the Olympic Athletes from Russia en route to the silver medal. Desbiens made her IIHF Women’s World Championship debut in 2015, helping Canada win silver. She appeared in three games, recording a pair of shutouts, before starting against Team USA in the final.

In October 2016 she sustained a concussion for her first serious hockey injury. She missed a month of competition before suiting up for the national team during the 2016 December Series against the United States. She suffered a knee injury during one of those games and it was a few months before it was stable again, thanks to a lot of physiotherapy, rehab exercises, and soft tissue work. Desbiens had previously worn the maple leaf as a member of the team that won silver at the 2011 IIHF World Women’s U18 Championship and with the national U22 team in 2012.

Desbiens played four seasons at the University of Wisconsin before being selected by the Boston Pride in the first round of the 2016 NWHL draft. She posted remarkable numbers during her four-year collegiate career, highlighted by a 0.89 GAA and .955 save percentage with 99 wins, including 56 shutouts, an NCAA record for men and women. In 2015-16 she had broken the NCAA single-season shutout record with 21 to be a top-three finalist for the Patty Kazmaier Award. In her senior season in 2016-17, she ranked first nationally in shutouts (17), wins (29), GAA (0.71) and save percentage (.963) to win the Patty Kazmaier Award as the top player in women’s NCAA hockey. Desbiens was a First Team All-American in 2016 and 2017.

A little more about Renée

Getting into the Sport: Started skating at age 3 and playing organized hockey at age 5… Her four older siblings all played hockey but she stuck with it because being at the rink was the highlight of her day… Outside Interests: Majored in business at the University of Wisconsin… Would like to be an accountant for a professional sports team… Enjoys reading books, cooking, and outdoor activities such as hiking, canoeing, and fishing… Odds and Ends: Role model growing up was Patrick Roy because of his style and being unafraid to try something new… Favourite quote: “It’s a great day for hockey!” – Bob Johnson.

A relative newcomer to the Canadian Women’s National Team, Geneviève Lacasse is one of three goaltenders that were centralized with…