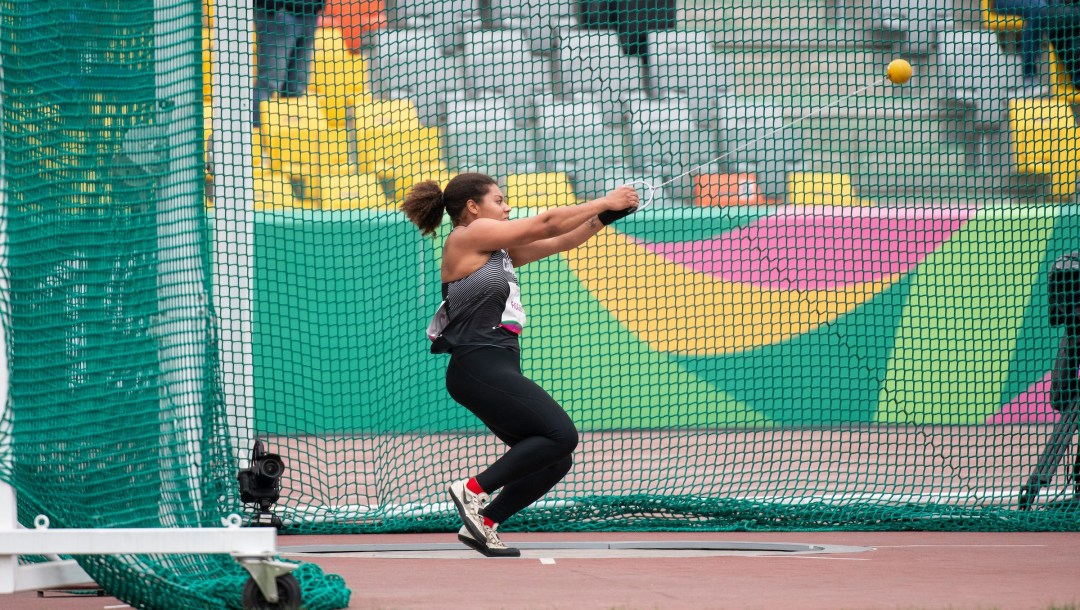 Camryn Rogers won the 2016 Canadian U20 titles in both shot put and hammer throw and made her international debut for Canada later that year at the U20 World Championships. In 2017 Rogers’ focus turned primarily to the hammer throw and she repeated as the U20 Canadian champion. A few weeks after that she represented Canada at the U20 Pan American Championships and won the gold medal.

In 2018 Rogers made her second appearance at the U20 World Championships and won the gold medal. She would be awarded the Eric E. Coy Trophy as Canada’s top U20 track and field athlete of the Year.

In 2019 she competed in her first senior Canadian Championship but came away with a familiar result, gold. She also made her debut with the senior team at the Lima Pan Am Games, where she finished sixth.

Rogers eclipsed the Olympic Standard with a new personal best (73.09m) and seventh best throw in the world during an NCAA competition in April 2021. The throw was also fourth best all-time in the NCAA.

Rogers competes collegiately for the University of California. As a freshman she finished on the podium in every event of the season, claiming bronze at the PAC-12 Championship, before a 13th place finish at the NCAA West prelims.  In 2019 as a sophomore with the Bears, she won the PAC-12 and NCAA Championships; her national title winning throw (71.50m) set a then-personal best, broke the Canadian U23 record, and went down as the seventh best throw in NCAA history. In 2021 she won the PAC-12 for the second consecutive time, and won the NCAA title.

A Little More About Camryn

Getting into the Sport: Was introduced to track and field in January 2012 and entered her first competition that April… Fell in love with hammer throw the moment she first picked one up and competed with it in June 2012… The London Olympics were the summer she started competing, and she watched the hammer throwers wide-eyed and knew from that moment that she wanted to compete for Canada… Biggest athletic inspiration has been her mother, who has ran 10 marathons, and is a constant reminder that where there is a will there is a way. ‘She always makes it clear that the only limitations I have are ones I put on myself’… Outside Interests: Studying to become an environmental lawyer… Hobbies include reading, watching documentaries, hiking and biking, going to concerts… Odds and Ends: Always brings a silver pendant given to her by her high school coach to each competition… Brings back coffee beans from places where she competes to experience the uniqueness of the coffee from different countries… Favourite motto: “Never train to settle”…