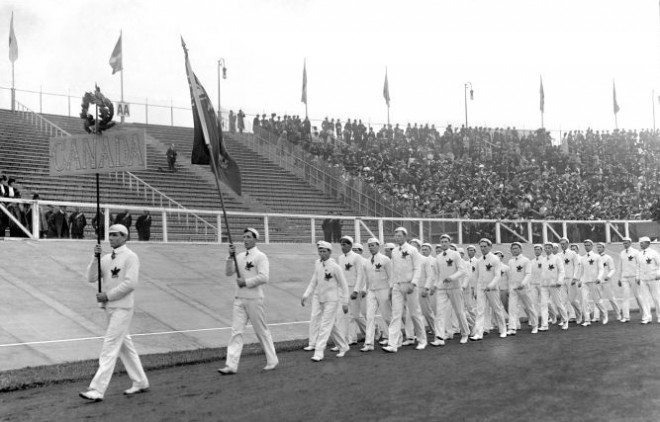 In his Olympic debut at the 1906 Intercalated Olympic Games in Athens, Edward Archibalds’ confidence was blown when his pole vault pole disappeared on his train ride from Italy, and then his replacement pole broke almost impaling him. Despite have vaulted nearly 3.65m (12’) in practice with his own pole, he never came close to that height at Athens 1906 with strange poles, and finished tied for 10th with a mark of 2.750m. In the pentathlon, which was decided by placement points, Archibald was seventh after four events and did not qualify for the six man final. At London 1908, Archibald was captain of the Canadian team and carried the Red Ensign into the stadium for the Parade of Nations, the first time this tradition was included. He went on to redeem himself from his experience four years previous and jumped 3.58m (11’9”) to capture the pole vault bronze medal, tying with two others.

Archibald’s first major pole vault result was as a student at the University of Toronto in 1905, setting an intercollegiate record of 3.10m (10’2¼”), and later a world record of 3.79m (12’5½”). The 1906 Canadian pole vault champion, Archibald graduated from the University of Toronto in 1907 and competed as a member of the Toronto West End YMCA winning the 1908 Canadian, British and Amateur Athletic Union pole vault titles. An all-round athlete, Archibald set the Canadian record for the shot put of 11.68m (38’4”) and competed in gymnastics.

During the First World War, Archibald served as director of Recreation, Sports and Social Work with the Canadian Army in France, providing activity for soldiers. After the war, he worked as sports editor at The Ottawa Journal and remained active in sports for his entire life, becoming the first president of the Ottawa and District Hockey Association. During the Second World War, Archibald was a member of the Canadian YMCA War services staff serving in Toronto and Newfoundland. In 1924, he set up Camp Wanapitei, a summer camp for children and teens, located four hours from Sudbury, Ontario on Lake Temagami.

In 2016, Archibald’s sports and war medals went up for sale on eBay. The Chatham Kent Museum purchased his First World War British War Medal, as well as his participation medal for Athens 1906 and his 1908 Olympic Trials medal for hammer throw.

In 1979, Archibald was inducted into the Canadian Olympic Hall of Fame and in 2001, the University of Toronto Varsity Blues Sports Hall of Fame.