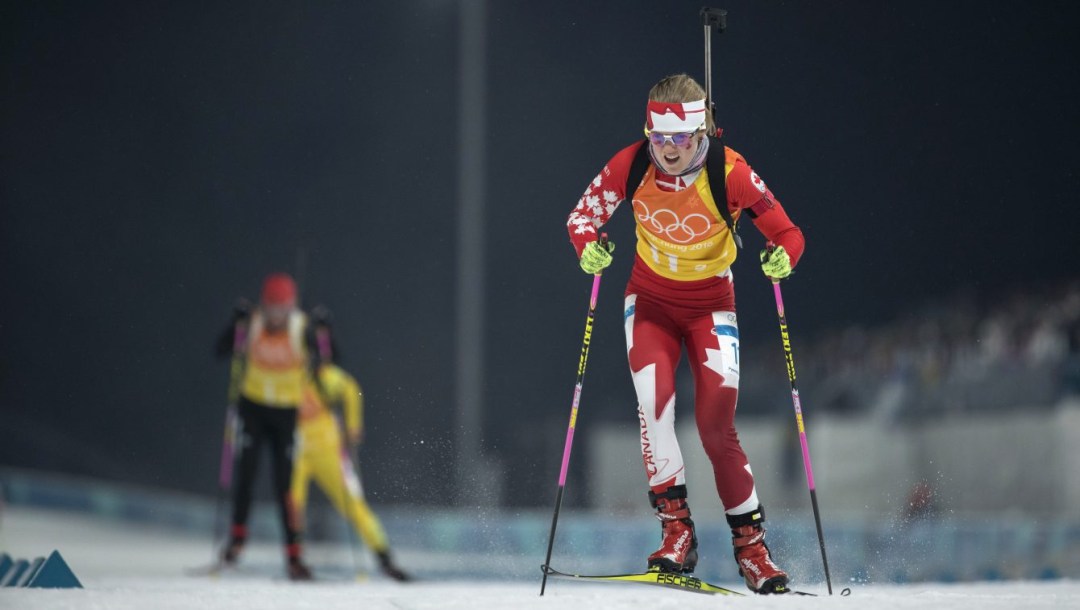 Emma Lunder moved to Canmore to further her biathlon training after her high performance team in Squamish, B.C. lost its funding and coach following the 2010 Olympic Winter Games. She joined a local club and qualified for her first international competition, the 2010 Youth World Championships, where she felt immense pride in wearing the maple leaf for the first time. She went on to compete at the 2011 and 2012 Junior World Championships. She also represented Alberta at the 2011 Canada Winter Games, winning silver in the relay and finishing fourth in the sprint.

Named to the national team in 2014, Lunder had a career breakthrough at the IBU Cup in Canmore in February 2015 when she finished second in the sprint for her first international podium in front of family and friends. Lunder encountered some injury troubles just before the 2015 team trials when she fell and tore a tendon and chipped a small bone in her thumb. She spent the entire racing season in a thumb cast, altering her rifle to fit it around the splint and adjusting her poling technique. A fall in a race in 2016 caused a second similar tear, but after a few weeks of rest she was able to continue the season.

After two seasons of what she calls lackluster racing, Lunder posted her best World Cup result in January 2017 when she finished 21st in the 15km individual in Antholz, Italy after hitting 19 of the 20 targets. She also made her world championship debut in 2017. She bettered her career-best World Cup result in December 2017 when she finished 18th in the 10km pursuit in Annecy, France. Her Olympic debut at PyeongChang 2018 included a 10th-place finish in the women’s 4x5km relay.

A little more about Emma

Getting into the Sport: Started cross-country skiing recreationally at age 7… Was introduced to biathlon through Sea Cadets in 2006… Did her first non-cadet biathlon race in 2007 and was invited to join the B.C. provincial team… Deferred university acceptance in 2009 to join the B.C. high performance team… Wasn’t until she graduated high school that she became aware of the IBU and World Cup circuits… Outside Interests: Always has a book on the go… Sometimes relaxes by colouring in adult colouring books… In the off-season enjoys experimenting with new recipes, going to yoga and dog/cat sitting for friends… Volunteers with the Canmore Food Bank… Athlete ambassador with Fast and Female… Part time barista at Starbucks since 2010… Studying general social sciences online through Athabasca University… Odds and Ends: Good friends with French biathlete Anais Bescond, who trained in Canada in the summer of 2016, allowing them to bond over card games and board games, which continued on the World Cup circuit… Almost always eats oatmeal for breakfast on race day… In-season will designate one pair of earring as her race earrings… Treats herself to interesting teas when she travels… Favourite quote: “A smooth sea never made a skilled sailor” – Franklin D. Roosevelt…