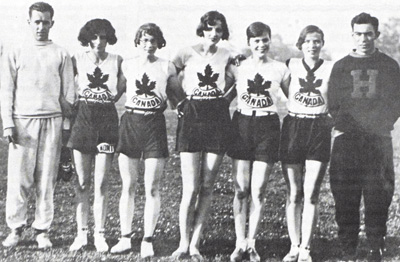 At Amsterdam 1928, sprinter John Fitzpatrick reached the semi-finals of the 100m and finished an impressive fifth in the 200m final which was won by Canadian teammate Percy Williams. As a member of the 4x100m relay team alongside Ralph Adams, Buck Hester and Williams, the Canadians were disqualified in the Olympic final. At the 1930 British Empire Games, Fitzpatrick won a medal of every colour capturing gold in the 4×100 yard relay, silver in the 220 yard, and bronze in the 100 yard.

A multi-sport athlete, Fitzpatrick played football with the Hamilton Tigers from 1926-28, winning the Grey Cup in 1928. From 1929-32, he attended the University of Toronto graduating with an engineering degree in 1933. A member of the U of T varsity track team, Fitzpatrick won 10 medals in intercollegiate track championships (seven of them gold), and captured the Yates Cup in his graduating year. From 1932-33, Fitzpatrick served in the University of Toronto Men’s Athletic Directorate.

In 1934, Fitzpatrick married Grace Cowan and had two sons. After a brief stint with the Royal Canadian Mounted Police, Fitzpatrick worked for Shell Canada as a diesel researcher, had a career in construction sales, worked for the Ontario Ministry of Highways, and became an inventor of the patented Fitzpatrick Dome used worldwide (winter weather shelters used to store large quantities of road sand/salt). He developed the water aeration system used in the St. Lawrence River to prevent ice from forming in the winter.

Fitzpatrick passed away in Toronto in 1989. He was inducted into the Canadian Olympic Hall of Fame in 1975.

By winning the 100m and 200m at the 1928 Olympic Games in Amsterdam, Canada’s Percy Williams established himself as the…