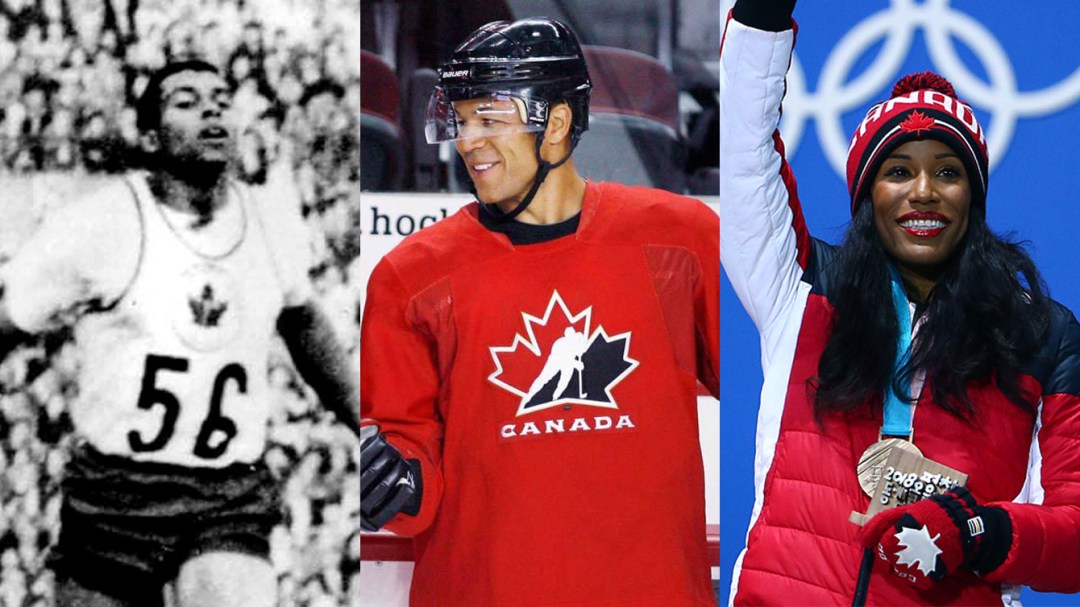 Black History Month is about honouring Black Canadians, past and present. We look to celebrate the contributions of Black athletes who have shaped our country, communities and culture for the better.

Though it had been celebrated since 1976, it wasn’t until December 1995 that the House of Commons officially recognized February as Black History Month in Canada.

Now, we are taking the time to celebrate some of the Black Canadian athletes who have contributed so much to our sporting success on the Olympic stage and beyond, inspiring generation after generation as they broke down barriers.

MORE: Celebrating contributions made by Black Canadians in sport 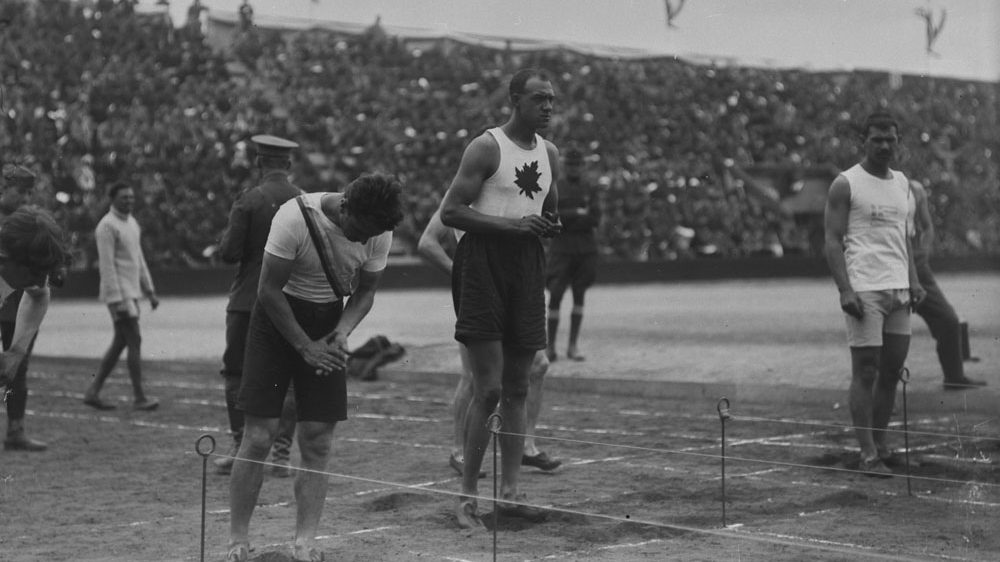 Army Howard competes in the 4th round of the 100m at the Inter-Allied Games at the Pershing Stadium in Paris in July 1919. (Photo: National Archives Bookstore.)

It was at Stockholm 1912 that John “Army” Howard became the first Black Olympian to represent Canada. But it was a troublesome time for him. He was subjected to racist coverage in the newspapers of the day. He was forbidden from staying in the same hotel as his white teammates as they prepared to cross the Atlantic and he endured a difficult ocean voyage.

A top-ranked sprinter who had previously defeated the Americans who would become Olympic medallists in the 100m and 200m, Howard unfortunately suffered from a stomach ailment in Stockholm and was unable to advance to the finals of his events. 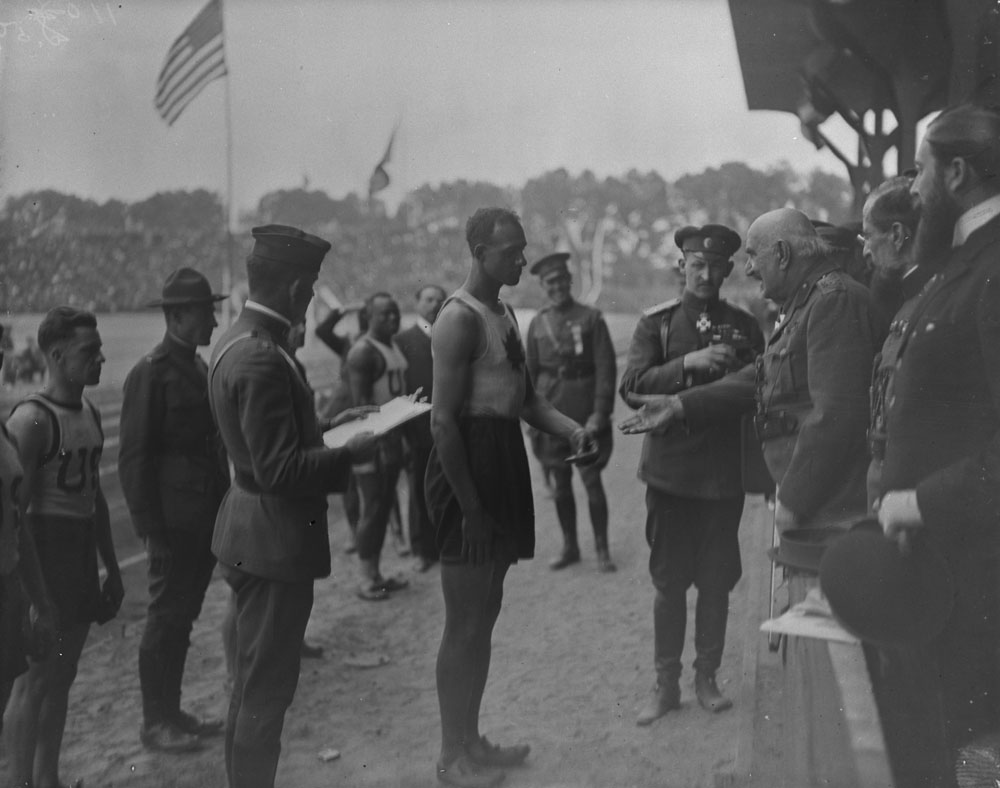 The King of Montenegro awards Army Howard his 100m bronze medal at the Inter-Allied Games at the Pershing Stadium in Paris in July 1919. (Photo: Library and Archives Canada.)

While serving with the Canadian Expeditionary Force in World War I, Howard won 100m bronze at the 1919 Inter-Allied Games. But even after he finished competing, his impact on Canadian sport was felt through two of his grandchildren who became Olympians themselves. 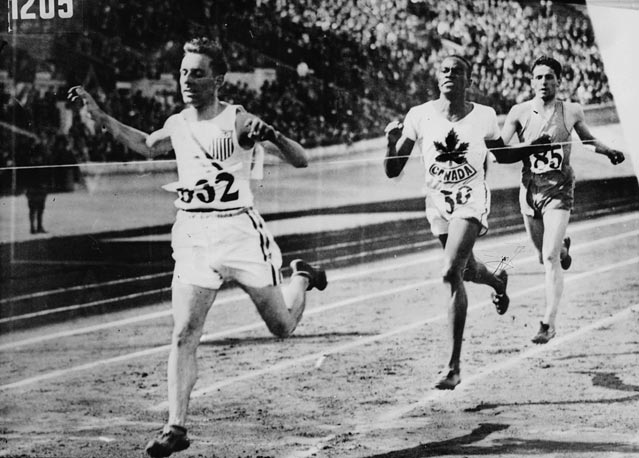 Born in Guyana, middle distance runner Phil Edwards earned the nickname “Man of Bronze”. He was unique among track and field athletes, winning five Olympic bronze medals but none of any other colour. Those five medals stood as a Canadian Olympic record that wouldn’t be matched until 2002.

Edwards’ first Olympic medal came at Amsterdam 1928 with the 4x400m relay team. At Los Angeles 1932, he had his greatest Olympic performance, standing on the podium as an individual in the 800m and 1500m while winning another 4x400m relay bronze. Edwards capped his Olympic career with another 800m bronze at Berlin 1936. 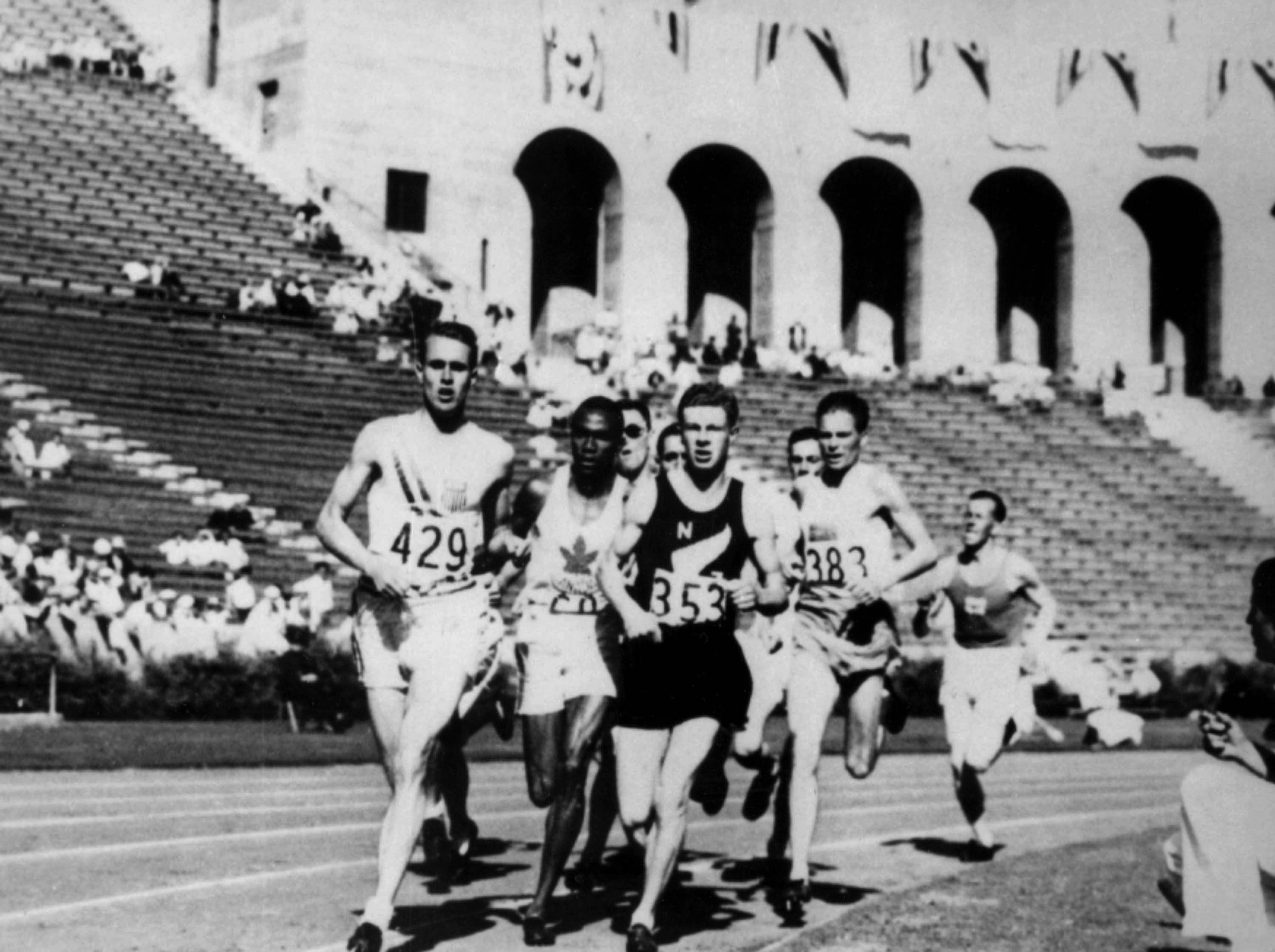 Among his other historic achievements were becoming the first Black man to win a medal at the British Empire Games (now Commonwealth Games) in 1934 and winning the first ever Lou Marsh Trophy as Canada’s Athlete of the Year in 1936.

Just before his final Olympic appearance, Edwards became the first person of African descent to graduate from McGill Medical School. He went on to have a distinguished career, serving as a consultant to the Canadian government on tropical and chest diseases.

The logo of Ray Lewis Elementary School in Hamilton represents both of Lewis’ jobs : sprinter and train porter. 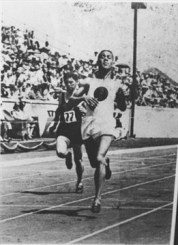 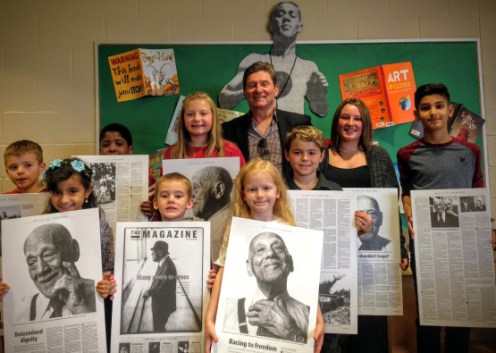 One of Edwards’ teammates on the bronze medal-winning 4x400m relay squad at Los Angeles 1932 was Ray Lewis. From Hamilton, Ontario, the grandson of escaped slaves was the first Canadian-born Black athlete to win an Olympic medal.

After not being selected for the 1928 Olympic team, Lewis continued to train while working as a porter with the Canadian Pacific Railway. He decided to give up a month’s pay to compete at the 1932 Canadian trials where he earned his ticket to Los Angeles.

Though he received few accolades in the immediate aftermath of his Olympic success, he was named to the Order of Canada in 2001 and following his death in 2003 had an elementary school in Hamilton named in his honour. 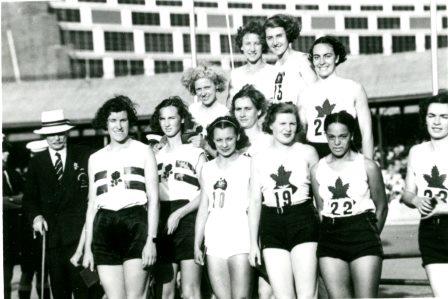 Vancouver sprinter Barbara Howard (#22) with her teammates on the Canadian relay team at the 1938 British Empire Games in Sydney, Australia. (Photo courtesy of the BC Sports Hall of Fame.)

Barbara Howard was just 17 when she qualified for the 1938 British Empire Games after running the 100 yards in 11.2 seconds, a tenth of a second better than the British Empire Games record. Believed to be the first Black woman to represent Canada in international sports competition, she came home from Sydney, Australia with a pair of relay medals. 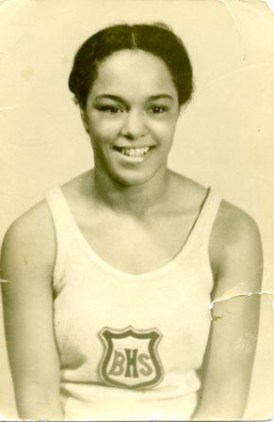 Vancouver sprinter Barbara Howard in her track uniform at Britannia High School, circa 1937-1938. Photo courtesy of BC Sports Hall of Fame. PNG) 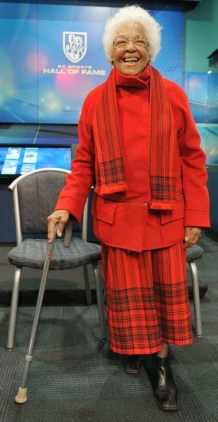 Barbara Howard at a ceremony for her induction into the British Columbia Sports Hall of Fame in Vancouver on January 17, 2012 (Photo: WAYNE LEIDENFROST / PNG)

But Howard never got the chance to showcase her sprinting ability at the Olympic Games when World War II led to their cancellation in 1940 and 1944. She went on to graduate from the University of British Columbia and became a teacher, making history as the first member of a visible minority to be hired by the Vancouver School Board. Her athletic accomplishments were recognized in recent years. She was inducted to the BC Sports Hall of Fame in 2012 and Canada’s Sports Hall of Fame in 2015. 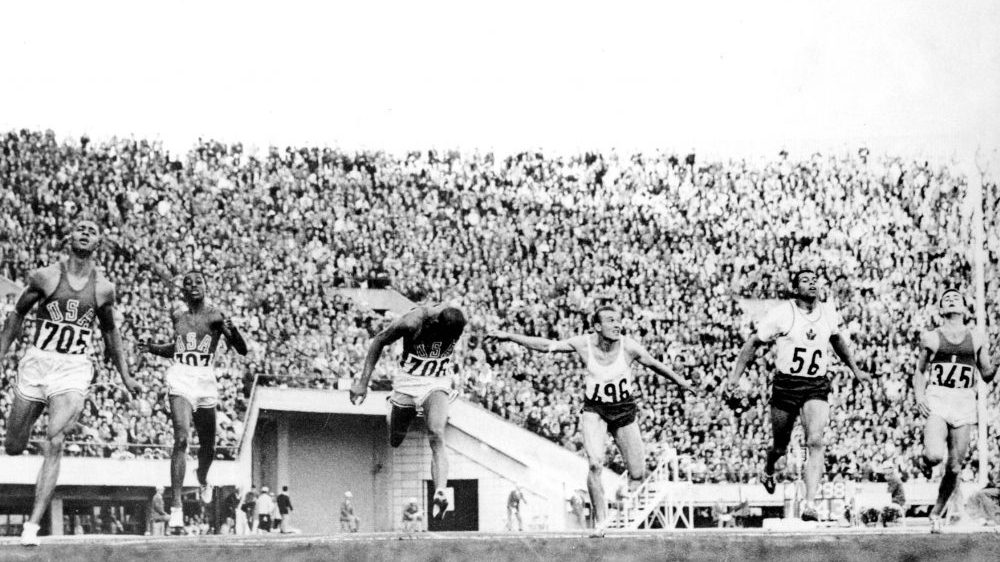 At Rome 1960, Harry Jerome and his younger sister Valerie followed in the footsteps of their Olympian grandfather Army Howard. Harry was the more accomplished of the sprinting siblings, tying the 100m world record in July 1960. After an injury affected his first Olympic appearance, he won 100m bronze at Tokyo 1964 where he also finished fourth in the 200m. 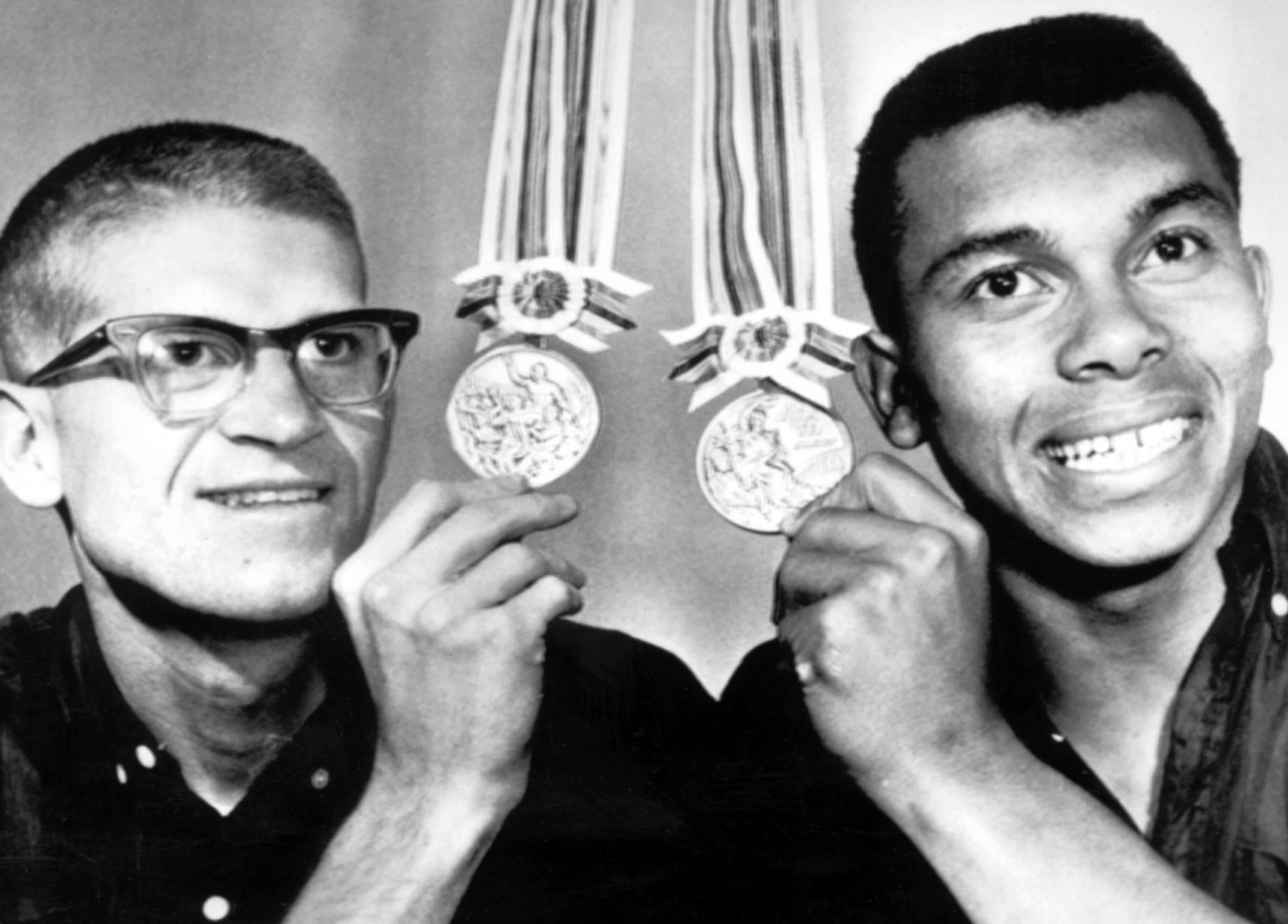 Bill Crothers and Harry Jerome with their silver and bronze medals from the Tokyo 1964 Olympic Games. (CP PHOTO/COC)

Retiring from competition after his third Olympic Games in 1968, Harry Jerome was invited by Prime Minister Pierre Trudeau to help create Canada’s new Ministry of Sport. He also used his profile to bring light to many socio-economic challenges facing Black Canadians, working to create opportunities outside of the sports world. 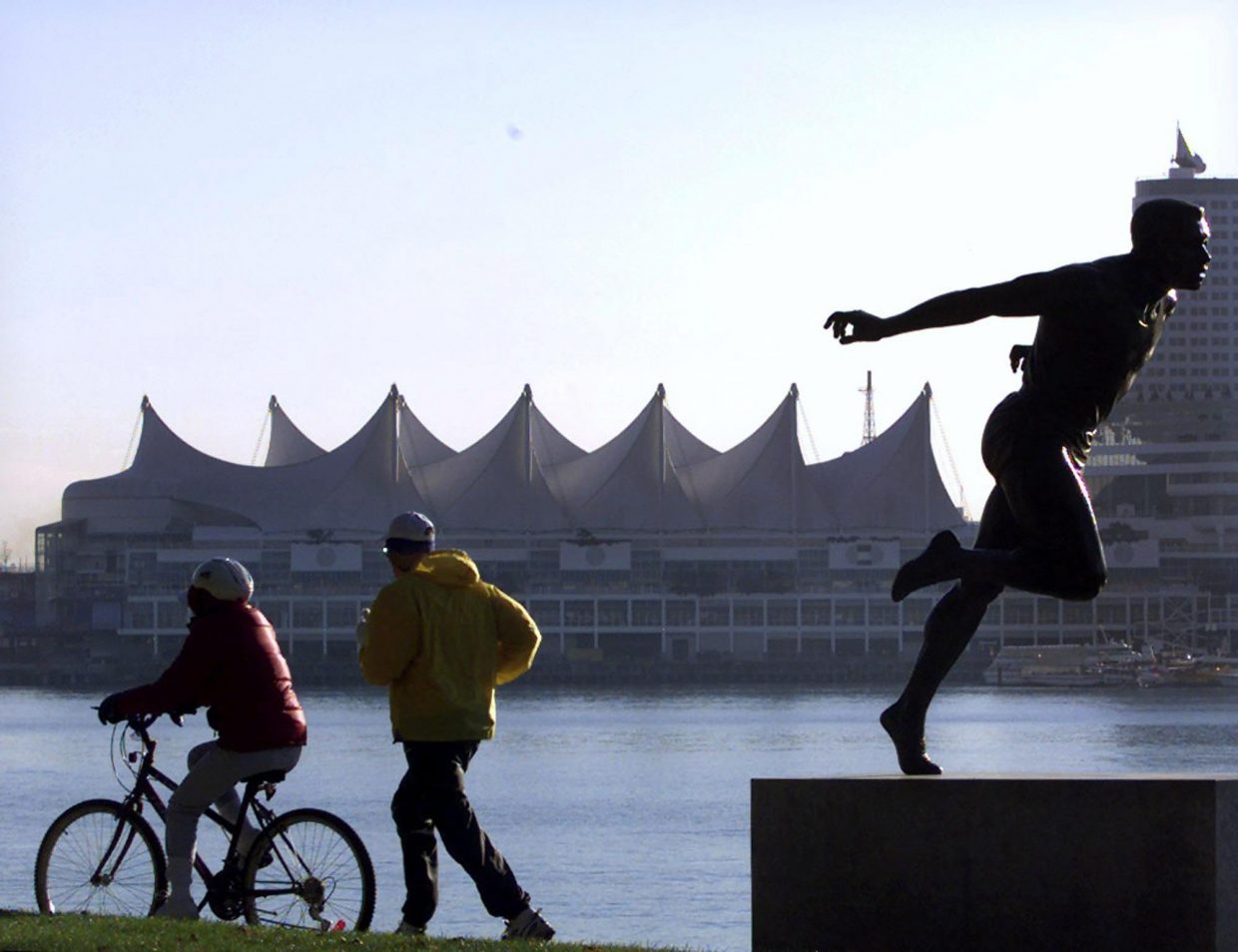 A cyclist and a jogger stroll through Stanley Park in Vancouver, next to Harry Jerome’s statue, on Tuesday, December 12th, 2000. (CP PHOTO/Chuck Stoody)

Jerome was just 42 when he suffered a brain aneurysm and died in 1982. Two years later, an annual international track and field meet in Vancouver was re-named in his honour and in 1988 a statue was erected in Stanley Park. He was inducted to Canada’s Walk of Fame in 2001. 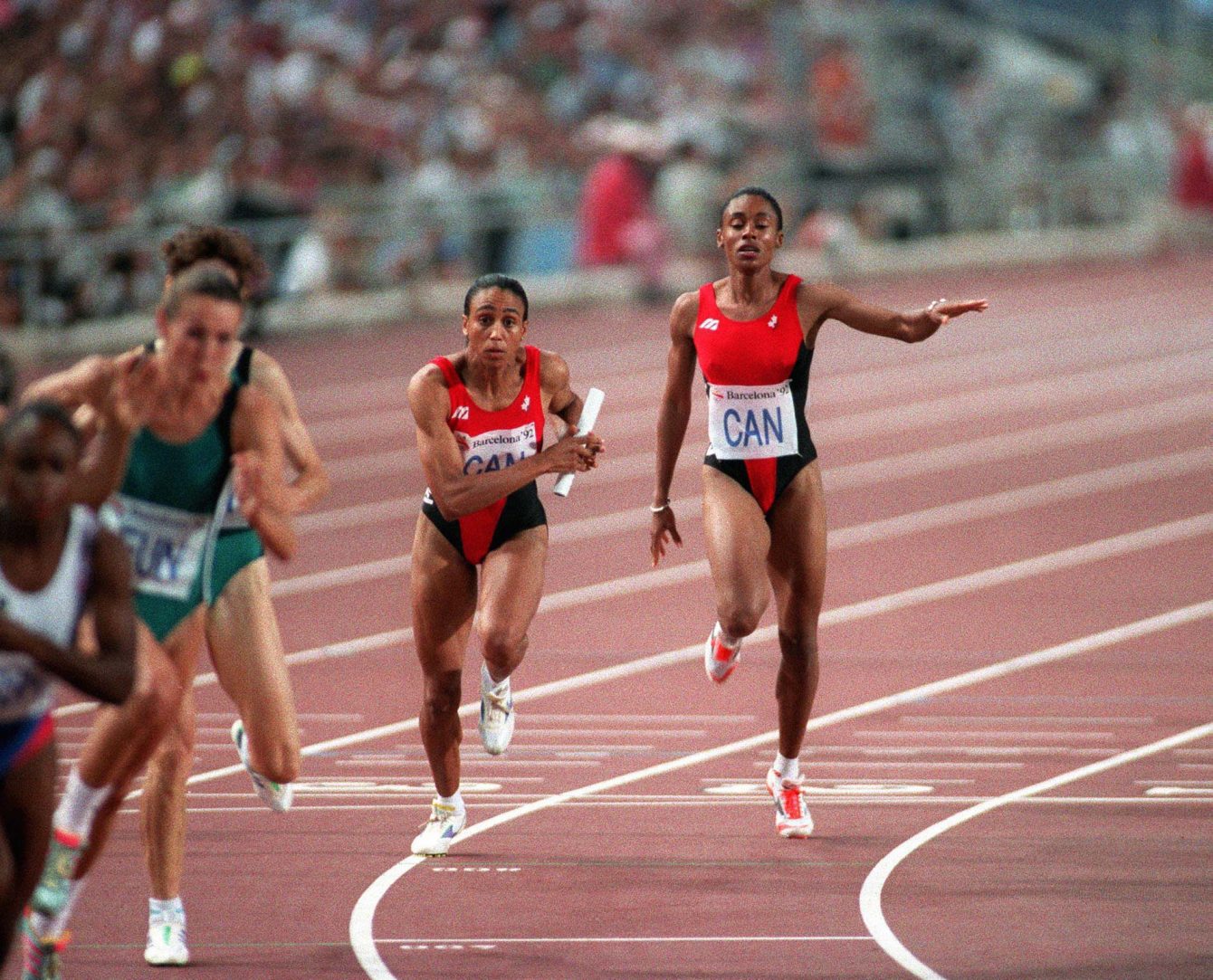 Five-time Olympian Charmaine Crooks has impacted Canadian sport like few others. At Los Angeles 1984, she was a member of the 4x400m relay team that won silver. At Atlanta 1996, she was given the honour of being of Team Canada’s Opening Ceremony flag bearer. In between, she won multiple medals at the Pan American and Commonwealth Games. 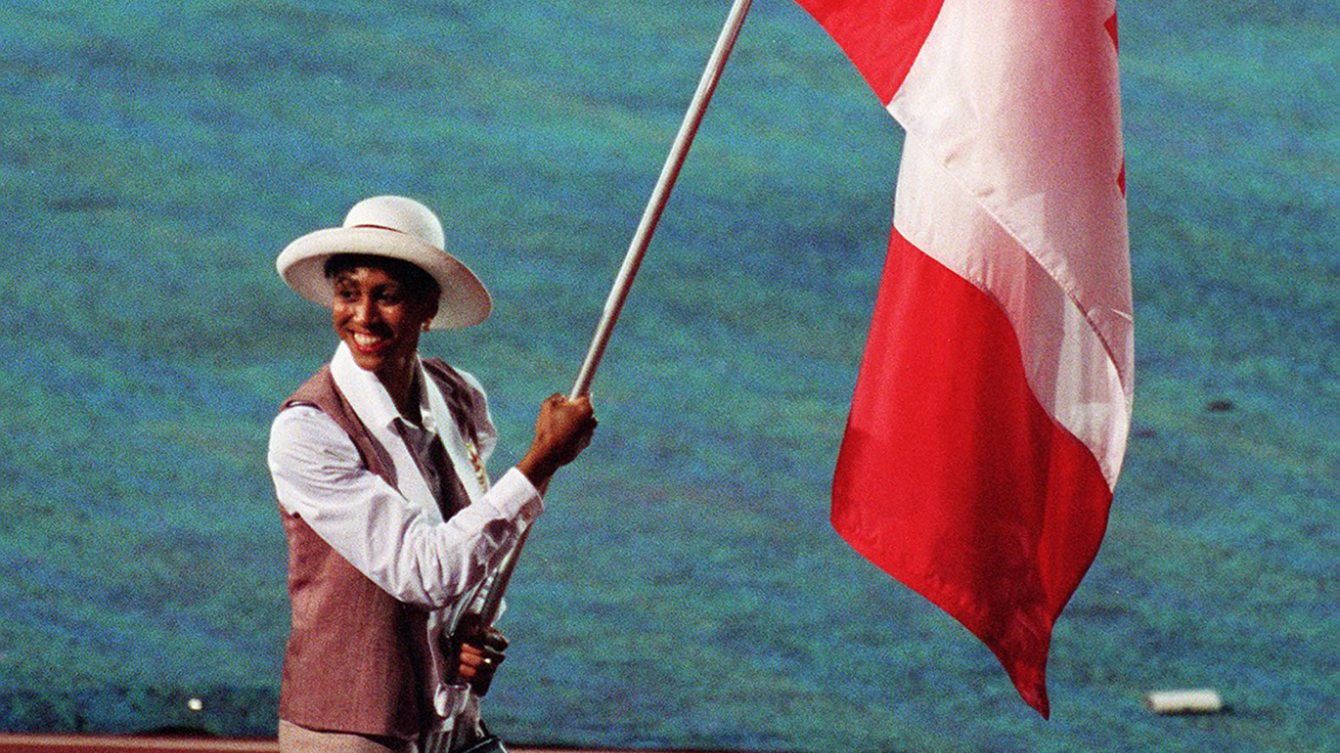 Elected by her peers to the IOC Athletes’ Commission in 1996, Crooks was a full voting IOC member from 2000 to 2004 and a founding member of the IOC Ethics Committee. Her commitment to fair play extended to her role on the founding Executive Board of the World Anti-Doping Agency. She has also served on the Executive Board of Right to Play International and in 2006 received the IOC Women and Sport Award. 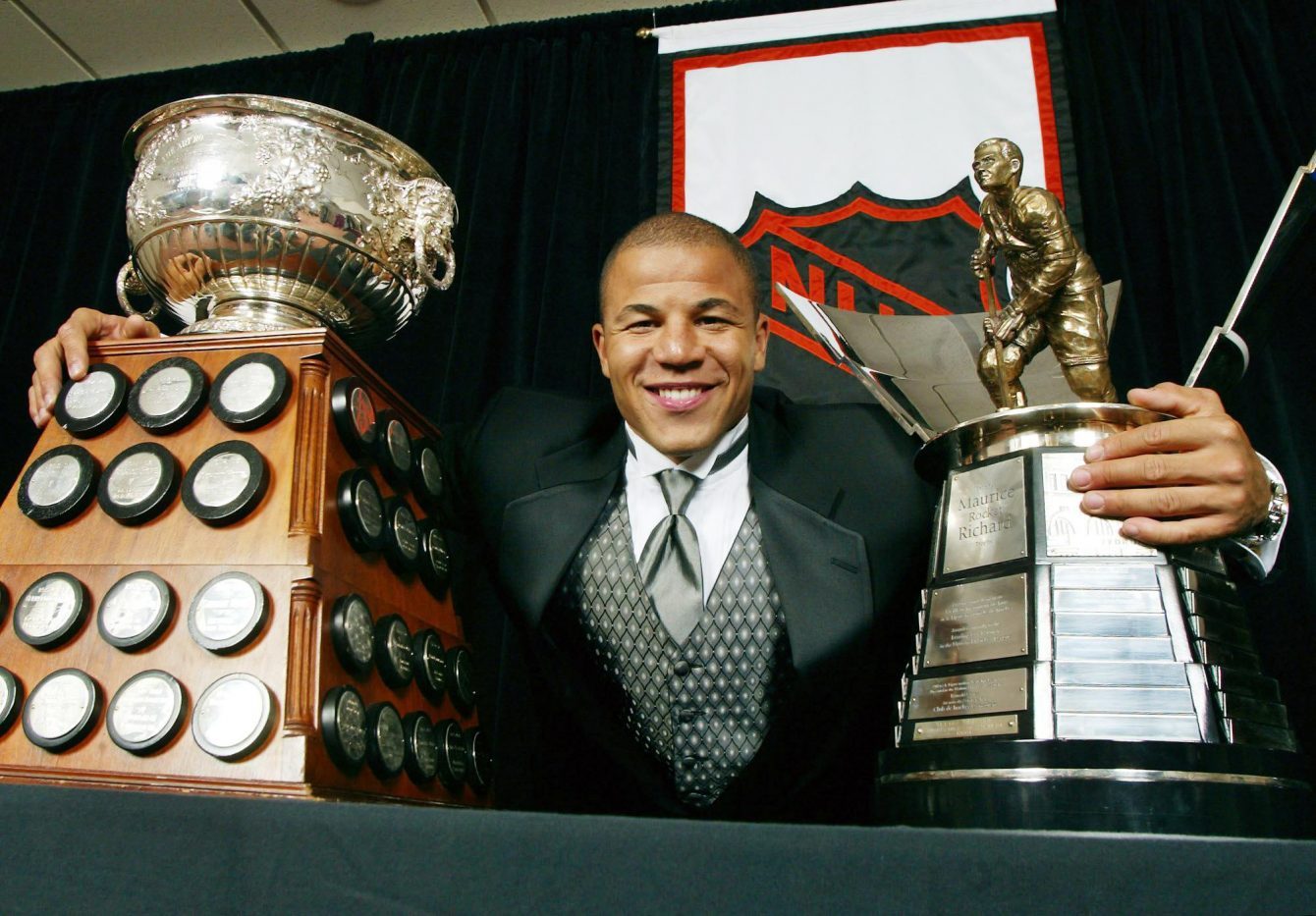 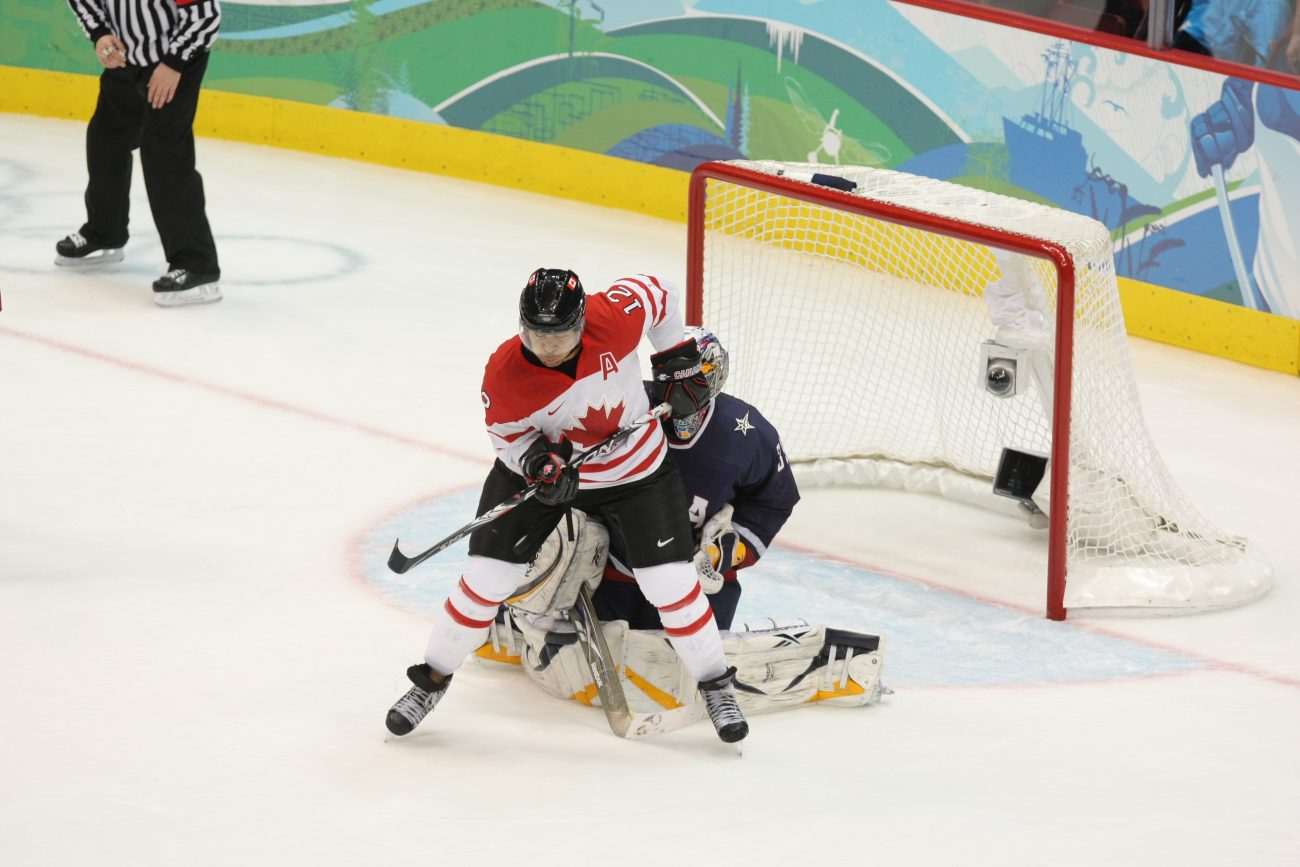 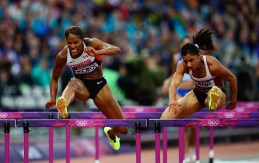 Canada’s Phylicia George (left) competes in the women’s 100-metre hurdle semifinals at the Olympic Stadium during the Summer Olympics in London on Tuesday, August 7, 2012. THE CANADIAN PRESS/Sean Kilpatrick 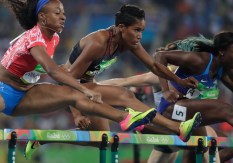 After qualifying for back-to-back 100m hurdles finals at London 2012 and Rio 2016, Phylicia George slid in to the history books at PyeongChang 2018. Just a few months after she pushed a bobsled for the first time, George became the first Black woman from Canada to have competed at the summer and winter Olympic Games. But George did more than just compete in Korea; she won a bronze medal with pilot Kaillie Humphries. 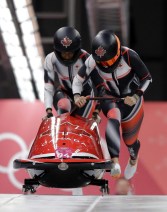 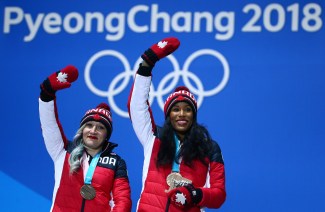 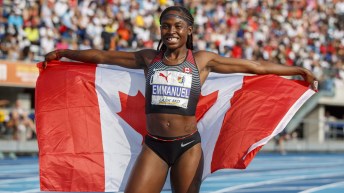 Crystal Emmanuel: I am Black, beautiful, proud, and empowering 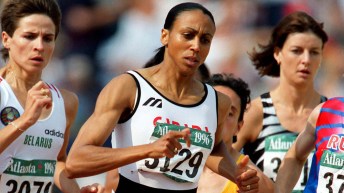 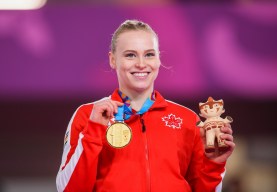