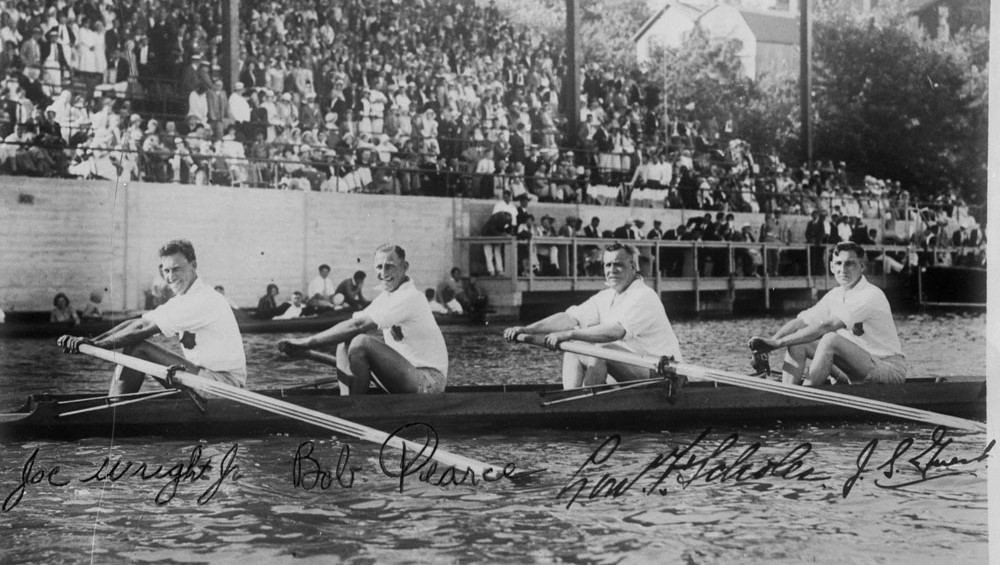 Canadian rower Joe Wright, Jr. partnered with his once former rival Jack Guest in the double sculls at Amsterdam 1928, where he was Canada’s flagbearer in the Opening Ceremony. They suffered a surprise defeat in the second round, beat France in the repechagé, beat the Germans in the quarter-finals, had a walkover in the semi-finals, and were defeated by the Americans in the final by 10 seconds, winning the silver medal. In the single sculls, Wright was eliminated in the quarter-finals by the eventual bronze medalist, and was an alternate for the men’s eights crew that won bronze (but did not compete). At Los Angeles 1932, Wright was one of five single scullers not to make the final.

Wright, Jr. had the daunting task of following in the tremendous wake of his famous father Joe, a two-time Olympic rowing eights medalist at St. Louis 1904 (silver) and London 1908 (bronze) and arguably the most famous rower on the Canadian national scene. It wasn’t until he was 18 that Wright, Jr. decided to take up rowing, joining the Toronto’s Argonauts Rowing Club where his family was the backbone of the club and a force in the Toronto sports scene. Later, while his father was coaching the Penn Athletic Club in the United States, Wright, Jr. won four singles titles in 1926 (from junior to senior) at the National Championships in Philadelphia. His father moved him back to Canada when the media referred to him as the ‘next “American” Diamond Sculls winner’.

Wright, Jr. was enroute to winning the sport’s most prestigious title at the 1927 Diamond Sculls at the Henley Royal Regatta (then the equivalent of a world championship), but as he was nearing the finish line with a two-and-a-half length lead over his English rival, Wright, Jr. ran afoul of a course marker and became too entangled to cross the finish in time. He came back in 1928 to win the Diamond Sculls title over the previous years’ winner. Wright, Jr. also won three US titles along with his nine Canadian championships.

By 1934, Wright, Jr. retired from rowing mostly due to the ulcer that had been plaguing him. And when the Argonaut clubhouse burned down in 1948, it took all his equipment with it, even his recreational rowing ended. He played football with the Toronto Argonauts in the Canadian Football League (CFL) from 1924-36 winning the 1933 Grey Cup. Wright, Jr. was an executive in sports administration for both rowing (twice president of the Canadian Association of Amateur Oarsmen) and football (president of the Argos in the 1960s and president of the CFL’s Eastern Conference). His physique was used as the model for the statue of Ned Hanlan, Canada’s first rowing superstar, which stands in the east end of Toronto. In 1930, he married three-time Olympic gold medalist swimmer, American Martha Norelius, had a daughter and later they divorced.