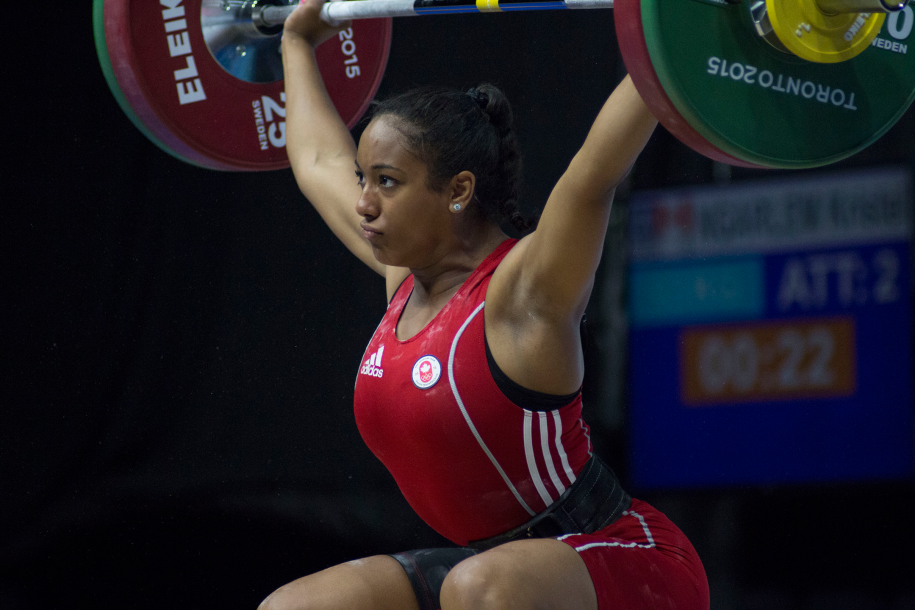 Kristel Ngarlem made her senior international debut for Canada at the Glasgow 2014 Commonwealth Games. Her fifth place showing in the 69kg division earned her a spot at the 2014 IWF World Championships, making her the youngest Canadian at the event.

A four-time junior national champion, Ngarlem competed in five IWF Junior World Championships, starting in 2010. She progressed up the standings each year, culminating in a 69kg silver in 2015. That summer, she also represented Canada at the Pan American Games in Toronto, where she just missed the podium with her fourth-place finish, despite lifting a then-personal best total of 211kg. Unfortunately, Ngarlem dislocated her shoulders twice in 2015, keeping her out of the world championships.

Healthy again in 2016, Ngarlem finished sixth at the Pan American Championships, her last in the 69kg weight class. She moved up to the 75kg division for the 2016 World University Championships where she won a bronze medal.

Ngarlem broke the 220kg total mark for the first time in 2017, finishing fourth at the FISU Universiade. She also finished eighth that year at both the Pan American and World Championships. She repeated the eighth-place finish at the IWF World Championships in 2018, her only international event of the year.

She opened 2019 with three consecutive podium finishes at the Las Vegas International, Pan Am Championships, and OPEN Senior Championships. She finished ninth at the Worlds that year despite lifting 100kg in the snatch and 130kg in the clean and jerk for the first time. She ended her year coming fourth at the IWF Grand Prix.

Ngarlem won bronze at the World Cup in 2020, setting a new personal best with a total of 233kg lifted. At the postponed Pan Am Championships in April 2021 she finished eighth.

Ngarlem competed at her first senior national championships when she was 14. She finished second at 63kg in 2011 and 2012, behind Olympic medallist Christine Girard, before moving up to 69kg. She spent another three years as runner up at nationals before again moving up a weight class to the 75kg division following her injury. Since the change in 2016, Ngarlem has been the senior Canadian 75kg/76kg title holder every year.

A Little More About Kristel

Getting into the Sport: Started weightlifting at age 10 after seeing the movie l’Incomparable Mademoiselle C about a young weightlifter… Had been looking for a sport in which to channel her energy but wasn’t artistic or graceful enough for figure skating… Has wanted to represent Canada at the Olympics since she competed at the 2014 Commonwealth Games… Outside Interests: Studied criminology at Université de Montréal.. Enjoys going to restaurants, yoga, travelling… Odds and Ends: Favourite motto: “Quand on veut, on peut” (Believe it till you make it)… Role model in weightlifting is Canadian Olympian Marie-Ève Beachemin-Nadeau who was always there to encourage and console her…