In 2014-15 Raheem Edwards enjoyed his first season playing with the Sheridan College Bruins, scoring eight goals in seven games. He was named OCAA Freshman of the Year. He also plays professionally with Toronto FC II in the United Soccer League.

Family: Parents Peter Phillips and Carla Edwards… Getting into the Sport: Started playing soccer at age 7, introduced to the sport by his father… Outside Interests: Attending Sheridan College… Odds and Ends: Favourite player is David Alaba… Nickname: Ra… 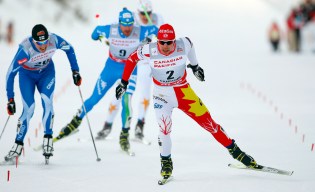 STRIVE: Remembering and Rebuilding through Sport

Molham Babouli plays professionally with Toronto FC II in the United Soccer League. Through eight games, he led the team...

Jeff Ellsworth is one of the longest serving members of the Men’s National Team, first appearing for Team Canada in...

In the leadup to PyeongChang 2018, defenceman Marc-André Gragnani played for Team Canada at the Channel One Cup and Tournament…