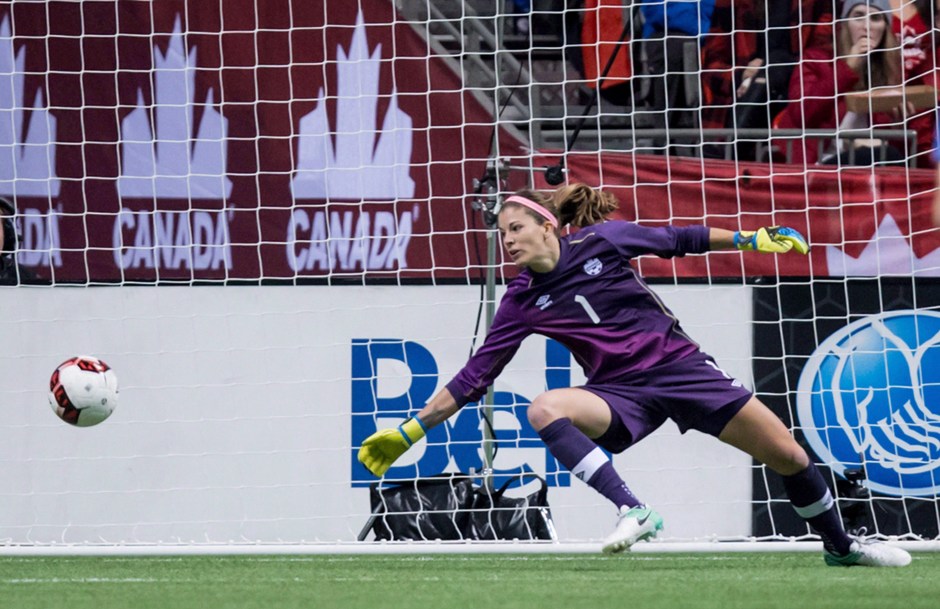 Goaltender Stephanie Labbé has been part of the Canadian Women’s Soccer program since 2002. She made her Olympic debut at Rio 2016 where she started five of six games, allowing just four goals, as Team Canada won the bronze medal.

Labbé was on the Canadian roster for the FIFA Women’s World Cup in 2011, 2015 and 2019. At the latter, she started all four of Canada’s games, allowing just three goals.

After winning silver at the 2003 Pan Am Games in Santo Domingo, she started four of Canada’s five matches at Toronto 2015 where the host nation finished fourth.

With the under-20 national team, Labbé won gold and silver at the 2004 and 2006 CONCACAF Championships, respectively, and competed at the FIFA U-20 Women’s World Cup both years.

Since making her senior national team debut in July 2008, Labbé helped Canada finish first at the 2011 Cyprus Women’s Cup and the 2016 Algarve Women’s Cup. She now has more than 75 caps.

Playing collegiately for the University of Connecticut, in her senior year Labbé had six shutouts and was named the 2008 Big East Goalkeeper of the Year. As a junior she played every minute of the season for the Huskies, picking up 11 shutouts, including three at the NCAA Championships, and was named to the NSCAA All-Northeast First Team.

Professionally, Labbé played with Swedish club KIF Orebro from 2009 to 2014, helping them to a second place finish in the top division in her last year and earning a nomination for Goalkeeper of the Year. Labbé would go on to play for the NWSL’s Washington Spirit from 2016 to 2017, making 25 appearances and backstopping the Spirit to the Championship game in 2016. After playing for both Calgary Foothills WFC and Linköpings FC in Sweden in 2018, she played two seasons with the North Carolina Courage in 2019 and 2020, winning the NWSL League title and Championship in 2019, her first professional championship.

A Little More About Steph

Getting into the Sport: Started playing soccer competitively at age 11… Split time between being a goalkeeper and outfield player until age 17, specializing in goalkeeping when she began university… Was in the stands for the 2002 U19 Women’s World Cup in Edmonton and knew she wanted to wear the maple leaf someday… Outside Interests: Earned Bachelor of Science in Early Childhood Development and Education from the University of Connecticut in 2009… Certified as a Personal Trainer from the National Academy of Sports Medicine in 2013… Enjoys yoga and meditation… Would like to pursue a Masters in Sports Psychology…  Supports Special Olympics Canada… Ambassador for KidSport and created the Stephanie Labbé Excellence Fund… Odds and Ends: Favourite motto: “Be you, bravely”… Partner Georgia Simmerling is a 2016 Olympic medallist in track cycling who also competed at two Olympic Winter Games in alpine skiing and ski cross… Has a dog named Rio… Has been open about her battles with mental illness and bouts of depression and anxiety in her career and how it’s made her mentally resilient and focused as a player…