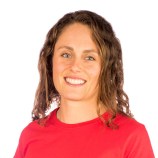 Thea Culley is the most internationally experienced member of the women’s field hockey team with more than 135 senior caps to her credit. She has known that she wanted to be an elite athlete since her grandfather took her to the Opening Ceremony of the 1994 Commonwealth Games in Victoria, where she was mesmerized by the Parade of Athletes. One of her proudest moments was then hearing O Canada played before her first match at the 2010 Commonwealth Games. She then helped Canada finish fourth at the 2011 Pan Am Games in Guadalajara. She went on to be part of Canada’s bronze medal-winning team at the 2013 Pan American Cup. Culley played for the University of Victoria Vikes from 2003 to 2007 and was named a CIS Tournament All-Star in 2004 and 2006 as well as an Academic All-Canadian in 2004-05 and 2006-07.

Family: Parents Lorren Culley and Lisa Henderson… Younger sister Paige Culley… Partner Brendan Starling… Getting into the Sport: Started playing field hockey in grade 8 because it and basketball were the only sports offered to girls at her high school… Focus turned to field hockey because she was too short for basketball and not a good shooter… Outside Interests: Graduated from the University of British Columbia in 2011 with a Bachelor of Human Kinetics… Enjoys cross-country skiing and is learning how to paint… Works as program coordinator for Karate BC and Judo BC… Supports Womyn’s Gym, part of the Beauty Night Society, which offers physical fitness to marginalized women because “all women have the right to feel good about themselves”…  Odds and Ends: Favourite motto: ‘There are some who live in a dream world, and there are some who face reality. Then there are those who turn one into the other’… Always wears a bandana for games… Nickname: Thizz…