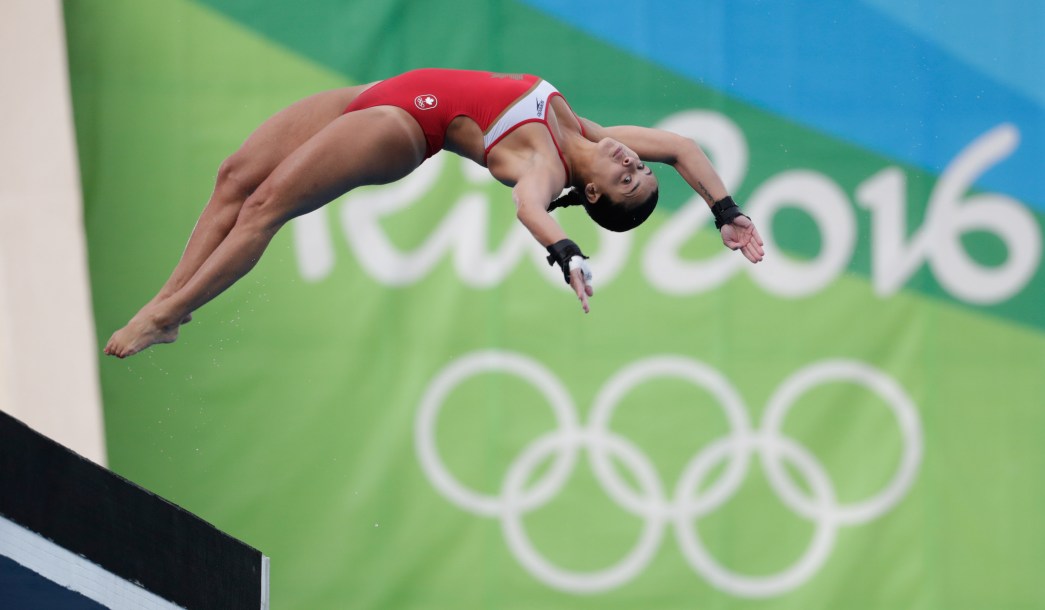 The postponement of the Tokyo 2020 Olympic Games to the summer of 2021 is the biggest sports story of the Covid-19 global pandemic.

But even before that unprecedented decision was made, dozens of events that impacted Olympic qualification had to be cancelled.

Read on for more about the changes that will affect sports in which Team Canada is still seeking Olympic qualification. Updates will continue to be made as new information becomes available.

To see all the quota spots Team Canada has earned thus far, check out our qualification tracker.

The Final World Qualification Tournament will take place June 18-21, 2021 in Paris, France. Three teams of three athletes per gender will earn Olympic spots along with one individual of each gender from countries not yet qualified.

World Athletics suspended the qualification period from April 6, 2020 to November 30, 2020. All athletes who had achieved entry standards prior to the suspension will still be eligible to compete at Tokyo 2020. 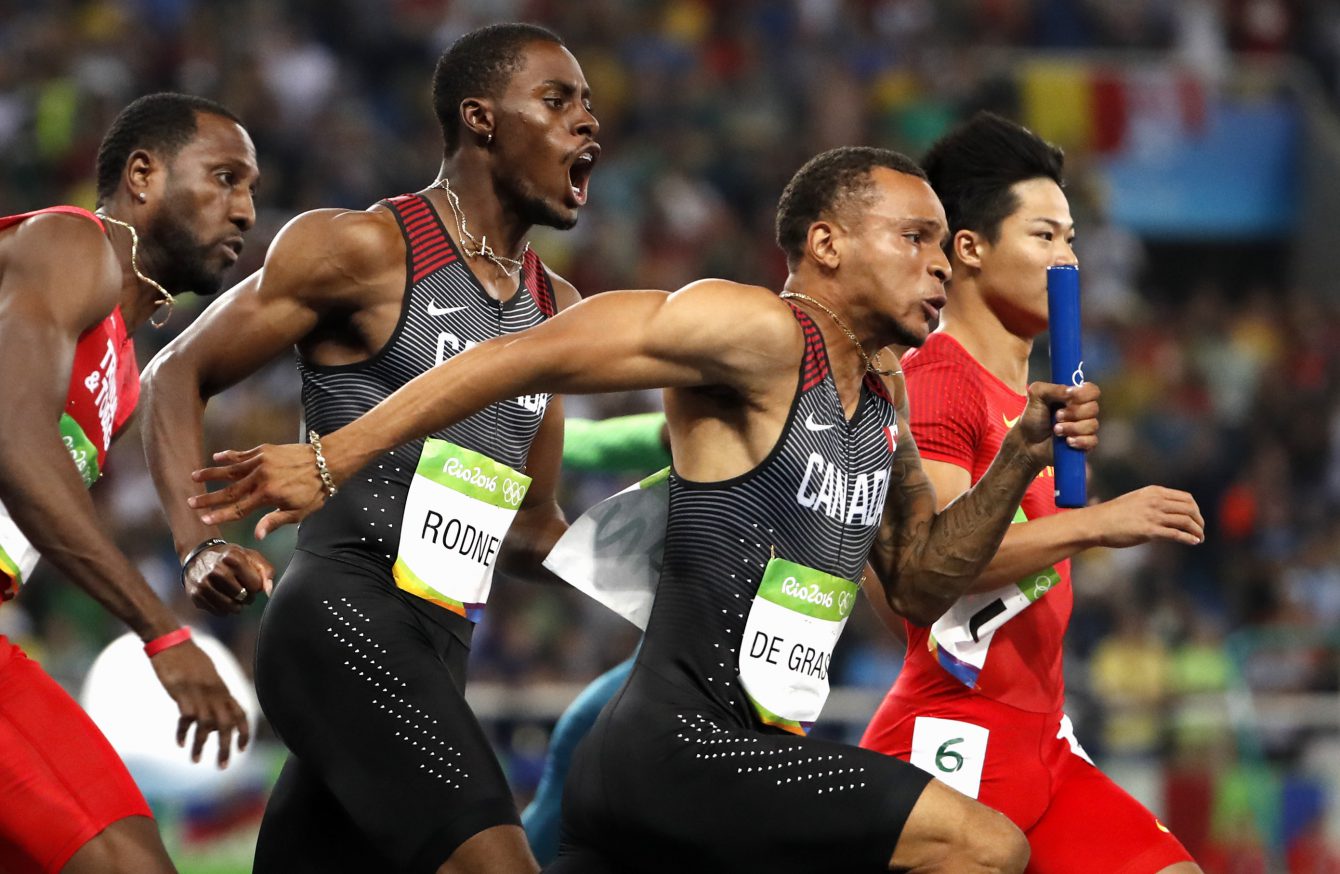 The qualification period resumed December 1, 2020. Athletes who compete in the marathons and 50km race walk will have until May 31, 2021 to achieve an entry standard or have their results count towards their world ranking. For all other events, the qualification window is open until June 29, 2021. You can see the official qualification system here.

Athletics Canada will hold Olympic Trials June 24-27, 2021 in Montreal but the competition program will focus on events that have selection implications for the Games. Entries will be invitation only and competing at the Trials is no longer a requirement for Olympic nomination.

The WBSC Baseball Americas Qualifier will take place in early June in Florida with the specific dates and venues to be confirmed. One team will qualify for Tokyo 2020 directly while the teams ranked second and third will advance to the WBSC Baseball Final Qualifier to be held June 16-20 in Chinese Taipei where one more team will book an Olympic berth.

While Canada’s National Women’s Team has already qualified, the men will get their chance to join them in Tokyo via the FIBA Olympic Qualifying Tournament taking place June 29-July 4, 2021. They’ll have home court advantage in Victoria, B.C. when they play against China, Czech Republic, Greece, Turkey, and Uruguay for the one available Olympic berth.

The FIBA 3×3 Olympic Qualifying Tournament, where Canada will have a men’s team vying for one of six available spots in the sport’s Olympic debut, will take place May 26-30, 2021 in Graz, Austria.

The Olympic qualifier for the Americas region, scheduled for May 10-16, 2021 in Buenos Aires, Argentina, has been cancelled. Instead, the 49 quota spots (33 men, 16 women) due to be awarded at that competition will now be allocated via the Boxing Task Force (BTF) Rankings on June 14, 2021.

A World Olympic Qualification Event was to follow in June, but that has also been cancelled. Instead, the BTF Rankings, which include results since 2017, will be used to allocate 32 men’s spots and 21 women’s spots equally across the four continental regions and weight classes. This includes 13 quota spots for the Americas region (one per event). 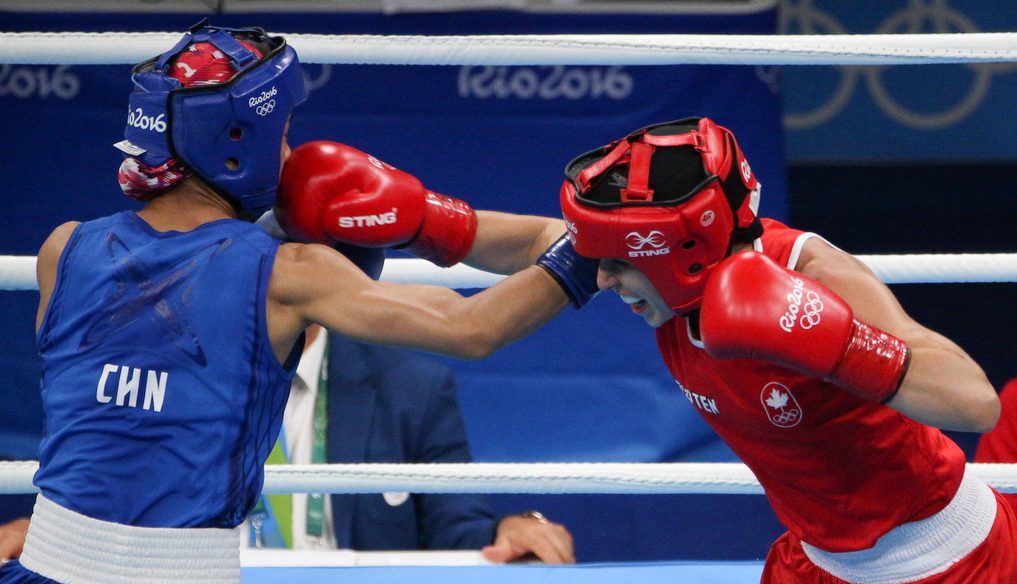 With spots already secured in three events, the focus for Canada is the women’s C-1, which will make its Olympic debut in Tokyo. There was to be one spot up for grabs at the Pan American Championships, April 30-May 2, 2021 in Rio de Janeiro, Brazil, but that competition has been cancelled and we are still awaiting information as to how open spots will be allocated.

The bulk of Olympic quota spots were awarded at the 2019 World Championships, but there were two opportunities remaining. Solo paddlers (ie: C-1 and K-1) can earn tickets to Tokyo at the ICF Canoe Sprint World Cup 2 in Barnaul, Russia, which will take place May 19-23, 2021. The Pan American Continental Qualifying Event was cancelled and we are still awaiting information as to how open spots available through that competition will be allocated. You can see the official qualification system here.

The UCI Olympic Qualification ranking will now include results from November 1, 2018 to March 3, 2020 plus two World Cup events in 2021 to be determined. The top-ranked NOC per gender will qualify two athletes while NOCs ranked 2-5 will qualify one athlete.

The UCI Olympic Qualification ranking will now include results from September 1, 2018 to March 3, 2020 and two World Cup events in 2021 to be determined.

The UCI Olympic Qualification ranking will now include results from May 28, 2018 to March 3, 2020 plus two World Cup events in 2021 to be determined.

Up to 18 spots will be available in each of the individual events. Canada is already maxed out in the women’s events, with two spots earned in each of the 3m springboard and 10m platform events at the 2019 World Championships. But Canada can still qualify two men for the 3m springboard and one more spot in the men’s 10m platform. You can se the official qualification system here.

Qualification for the eight teams of three athletes per event was based on the FIE Official Team Ranking List on April 5, 2021.

Those same dates also applied to the FIE Individual Adjusted Official Ranking for NOCs without teams to qualify one athlete per event. A final opportunity comes at Zone Qualifying Events which will be held in the range of April 15-30, 2021.

Qualification will still be based on the Olympic Golf Rankings, with the men’s qualification period now ending on June 21, 2021 and the women’s closing a week later on June 28, 2021. The rankings were suspended on March 20, 2020 but points were able to accumulated again when the professional tours resumed their tournaments in June and July 2020. 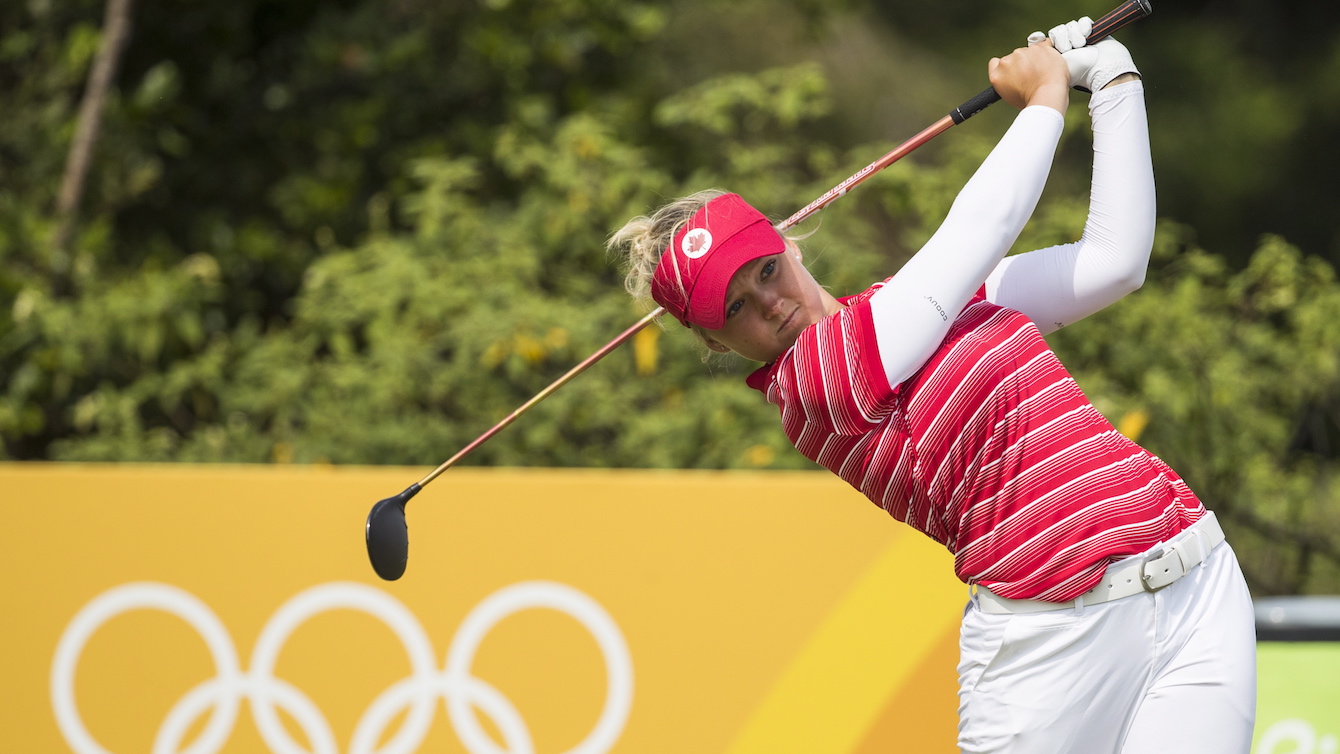 Team Canada’s Brooke Henderson tees off during the final round of women’s golf at the 2016 Olympic Games in Rio de Janeiro, Brazil. (THE CANADIAN PRESS/HO – COC – Mark Blinch)

Canada has already qualified a women’s team and one man (René Cournoyer) based on results from the 2019 World Championships.

All-around spots will also be awarded at Continental Championships, with the Pan Am Championships taking place June 4-6 in Rio de Janeiro, Brazil.

FIG has adjusted the Olympic qualification system to match its own technical rules regarding minimum age requirements. Women born on or before December 31, 2005 (meaning they will turn 16 in 2021) will now be eligible for the postponed Games, which they would not have been if the Games took place in 2020. The same is true for men turning 18 in 2021 (born on or before December 31, 2003).

FIG has also said that the Code of Points for the 2017-20 quadrennial will remain in force until the end of 2021.

Canada has one women’s spot locked up so far, thanks to Rosie MacLennan‘s performance at the 2019 World Championships. There are further opportunities to qualify via the Pan American Championships (June 11-13, 2021) and the World Cup Series, with those competitions being held before June 29, 2021.

The World Cup Series, to be held between October 2020 and June 29, 2021, and Continental Championships are the remaining opportunities for individuals to qualify. Groups will have a chance to earn Olympic spots via the Pan Am Championships, taking place June 11-13 in Rio de Janeiro.

The IJF World Ranking List, which counts results dating back to May 25, 2018, will now close on June 28, 2021. The top 18 in each weight class, with a maximum of one athlete per NOC per event, will qualify for Tokyo 2020. Continental representation will also be assured via that World Ranking List

An Olympic Qualification Tournament where three athletes per event will qualify for Tokyo 2020 will take place June 11-13, 2021 in Paris. 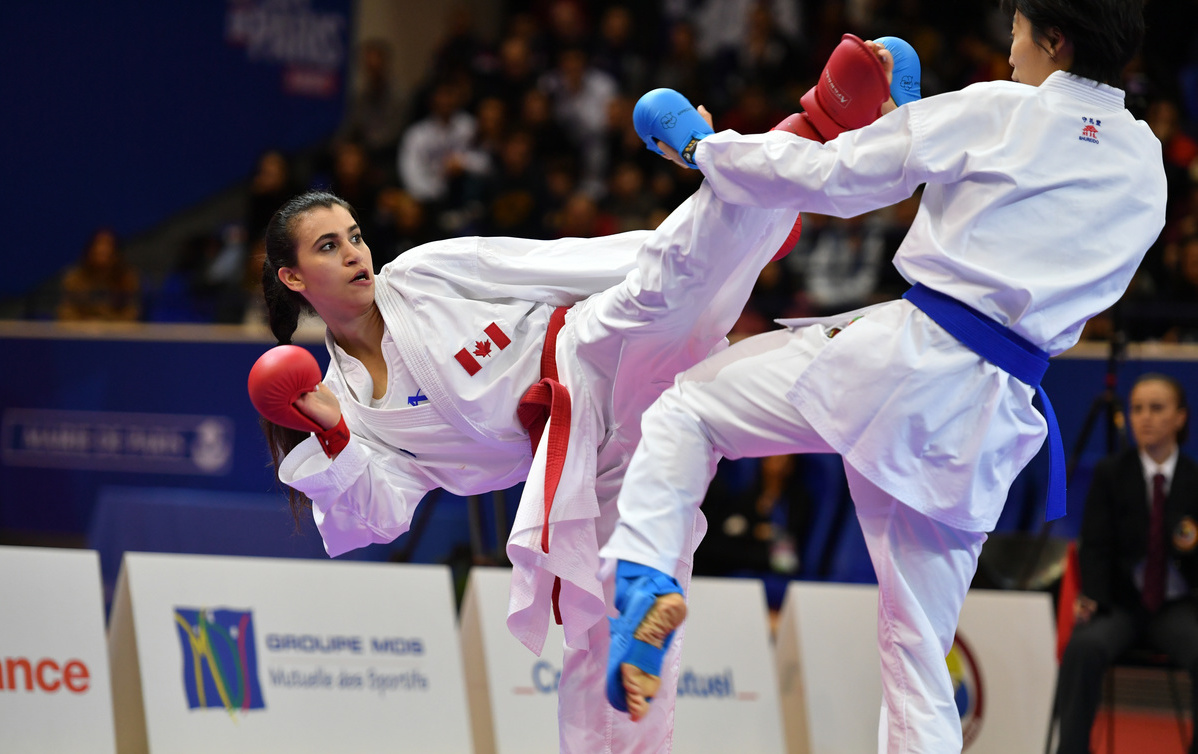 There remain two ways for athletes to qualify for Tokyo 2020. At the UIPM World Championships taking place June 7-13, 2021 in Minsk, Belarus, the top three athletes per gender will qualify themselves, unless they have already booked their Olympic berth. In that scenario, the quota would be added to the six to be awarded via the UIPM Olympic World Ranking List which will be published on June 14, 2021.

Canada qualified six boats at the 2019 World Rowing Championships. An opportunity remains to qualify more boats via the Final Olympic Qualification Regatta, taking place May 15-17, 2021 in Lucerne, Switzerland. You can see the official qualification system here.

The Olympic World Skateboarding Rankings on June 30, 2021 will qualify 16 more athletes in each event, with a maximum of three per NOC while ensuring that each continent is represented. Athletes have been earning ranking points since January 1, 2019.

All athletes who had met entry standards in individual events prior to the Games being postponed will remain eligible for selection. The qualification window, which opened March 1, 2019, will now close on June 27, 2021 for those swimmers still seeking standards.

In the relays, 12 NOCs qualified in each event at the 2019 World Championships. The four remaining places in each will be based on the fastest times in the FINA World Rankings. That qualification window will now close on May 31, 2021. You can see the official qualification system here.

The Canadian Olympic Trials will still take place at the Toronto Pan Am Sports Centre but will now be held May 24-28, 2021. In December 2020, Swimming Canada announced that the Trials would be held as an invitational event, with a maximum of 20 entries per Olympic event. This decision was made following a review of scenarios that would “allow for sufficient physical distancing and other risk mitigating protocols”. The planned format for each event is a timed final over two 10-lane heats. 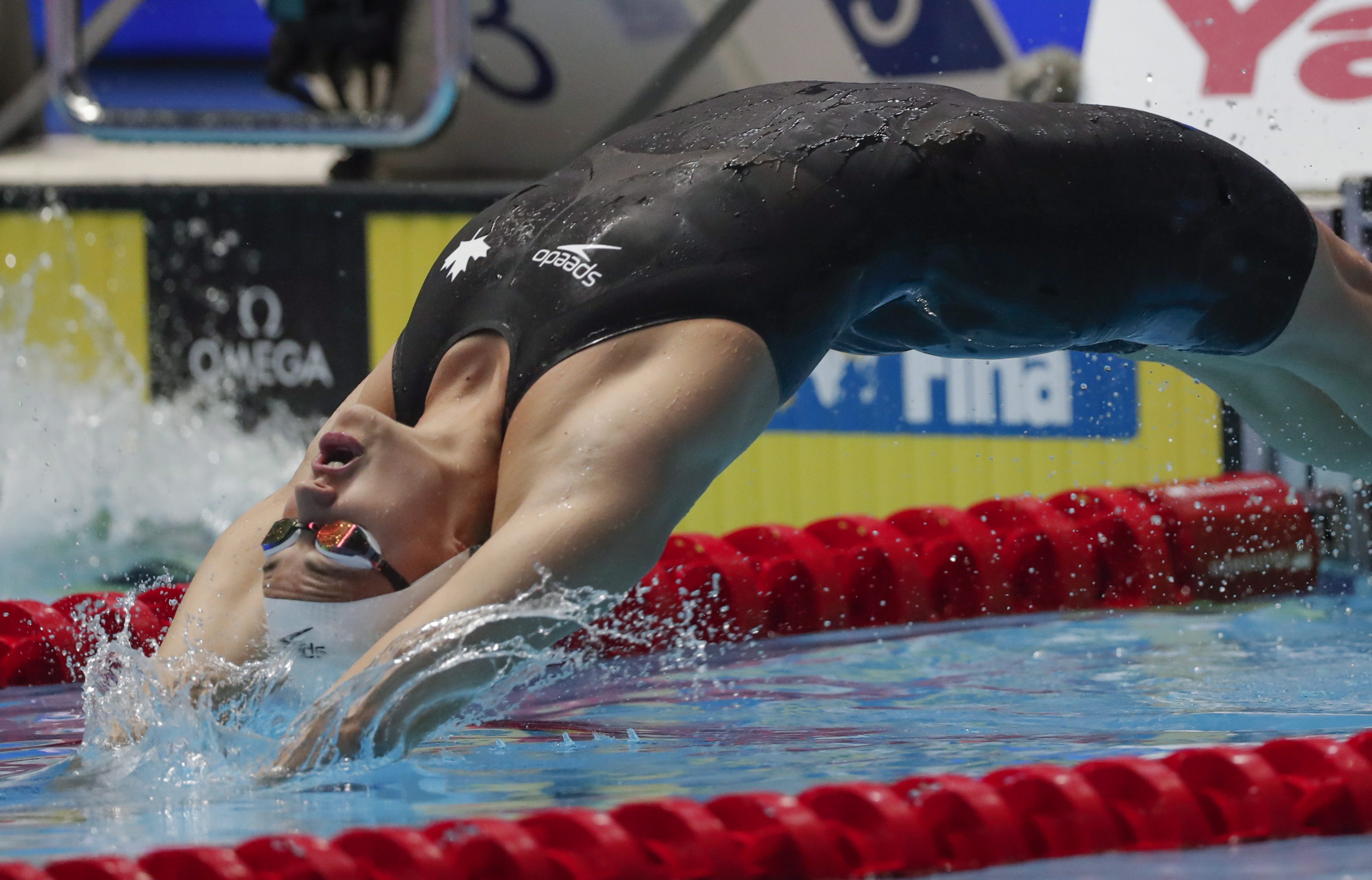 For open water swimming, it was announced in December 2020 that the national trials planned for April 17-18, 2021 in the Cayman Islands would be cancelled. Instead, the Canadian entries for the Olympic qualifier, where swimmers will aim to earn their own tickets to Tokyo 2020, will be determined using the unexpected circumstances clause of Swimming Canada’s selection criteria. The FINA Olympic Marathon Swim World Qualifier will take place June 19-20, 2021 in Setubal, Portugal.

The ATP and WTA singles and doubles rankings on June 7, 2021 will determine the majority of qualified athletes. That includes 56 entries in each singles event (with a maximum of four per NOC per gender) and 31 entries in the men’s and women’s doubles events (with a maximum of two teams per NOC per gender). The mixed doubles field will be determined on-site in Tokyo, based on the rankings of players already qualified in the other events.

For individuals not qualified as part of a mixed relay team, there are 26 spots available per gender (max three per NOC) via the World Triathlon Individual Olympic Qualification Ranking on June 14, 2021.

World champions Sarah Pavan and Melissa Humana-Paredes have already locked up one spot for Canada. To join them in Tokyo, Canadian teams will have to be ranked in the top 15 of the Olympic Ranking List on June 14, 2021, with results being counted back to September 1, 2018. After that, one last chance remains at the Continental Cup Finals to be held June 21-27, 2021.

In each event, the eight highest-ranked athletes will qualify, with a maximum of one per NOC. Five more spots will be awarded to the highest-ranked athlete from each continent, from an NOC not yet qualified in that event. An NOC can qualify a maximum of four men and four women, meaning it is impossible for a country to be entered in all seven weight classes for each gender.

Canadian wrestlers earned four Olympic spots at the Pan American Qualifier in mid-March. The last remaining opportunity will be the World Qualification Tournament in Sofia, Bulgaria, taking place May 6-9, 2021.