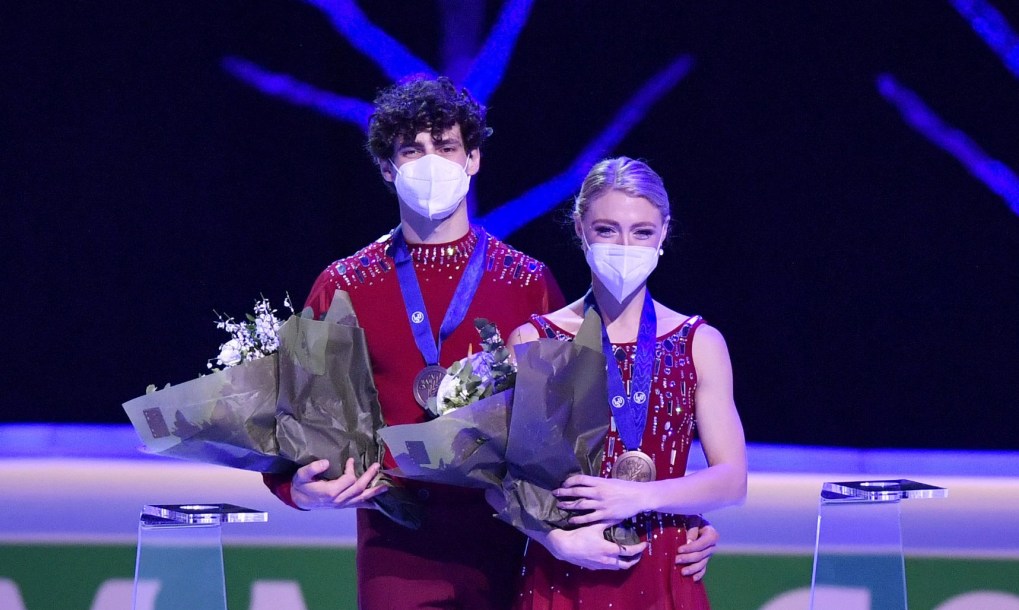 This weekend, Team Canada saw a career first on the ice rink, booked a ticket to Tokyo 2020 and celebrated many World Cup medals.

From the snow in Switzerland to the heat in Miami, Canadian athletes were all over the leaderboards worldwide.

Keep reading to catch up on what you missed:

Gilles and Poirier secured a bronze medal at ⛸ worlds

🥉 An emotional performance and an emotional reaction to their World medal from Piper Gilles and Paul Poirier who take the bronze medal at the ISU World Figure Skating Championships!

In their first international competition in over a year, Piper Gilles and Paul Poirier climbed the podium on Saturday. The Canadian ice dancers won a bronze medal at the ISU World Figure Skating Championships in Stockholm, Sweden. The duo sat in fourth position after Friday’s rhythm dance. Saturday’s enchanting free dance to “Both Sides Now” by Joni Mitchell shot them into the bronze medal position with a personal best combined point total of 214.35.

Canada secured Olympic quota spots in all four disciplines for Beijing 2022 with its results at the world championships. Full details on that to come.

Canadian judokas are decorated in Georgia

It was a successful weekend for Canadian judokas, who secured four medals at the Judo Grand Slam in Tbilisi, Georgia. Canada finished the weekend ranked as the second nation overall of the tournament. The first podium result came on Friday by Christa Deguchi, who clinched a bronze medal in the women’s -57 kg category.

After an explosive -100kg Final, the eventual winner Shady El Nahas shows his respect for his opponent Georgia’s Sulamanidze to mark the end of a brilliant day’s Judo for the Canadian.
——#JudoTbilisi #Judo #Tbilisi #Sport #Olympics

On Sunday in Switzerland, Liam Brearley reached the second step of the podium in the men’s snowboard slopestyle event in Silvaplana, Switzerland. This is the second career World Cup medal for the three-time Youth Olympic Games medallist. He finished the season third overall in park & pipe World Cup standings.

With both Canadians moving into the medal rounds, Canada has already earned an Olympic Qualification for Women's Recurve! More information to follow soon. pic.twitter.com/w8O4dQ6kav

Archery Canada secured a Tokyo 2020 Olympic quota spot in the women’s individual recurve event based on performances at the Continental Qualifier in Monterrey, Mexico.

There were three spots available to be won, but only one per country. Stephanie Barrett won silver and Tania Edwards won bronze, locking up the spot for Canada. Brazil and Ecuador claimed the other two quota spots available in the women’s event.

Canada had previously qualified an Olympic spot in the men’s individual event and will next attempt to qualify full teams of three for each gender at the Final Olympic Qualification event in Paris, France in June.

Three Canadians remain in men’s and women’s singles at the Miami Open. Milos Raonic and Denis Shapovalov are set for their respective third round matches on Monday. Raonic is up and running at the Miami Open and looks a force to be reckoned with. In the round of 16, Raonic will take on 20th seed Ugo Humbert of France at 11 a.m. EST and Shapovalov will face Poland’s Hubert Hurkacz.

Absolute magic from @Bandreescu_ on the volley. ✨

On the women’s side, Bianca Andresscu is moving on after gritting out a 7-6(4), 6-7(2), 6-4 third round win over American Amanda Anisimova. The tennis superstar will meet Garbiñe Muguruza in the round of 16 on Monday at 8:30 p.m. ET.

The sole Canadian left in doubles action is Gaby Dabrowski. Dabrowski and partner Mexican Giuliana Olmos will play for a spot in the quarterfinals on Monday at 12:15 p.m. ET.

Kerri Einarson and Brad Gushue won gold at the Canadian Mixed Doubles Curling Championship at the Canada Olympic Park in Calgary. The pair rolled to a 9-6 win over Kadriana Sahaidak and Colton Lott to claim the mixed title.

Championship Selfie! Both @KEinarson and I are very proud and excited to win the 2021 Canadian Mixed Doubles Championship. Humbled by the support from everyone in NL, Manitoba and across Canada. Thanks! pic.twitter.com/KJ1rAUlGrv

With eyes on securing an Olympic quota spot, Einarson and Gushue will represent Canada at the 2021 World Mixed Doubles Championship, taking place May 17-23 in Aberdeen, Scotland. The top seven countries will secure qualification for the Beijing 2022 mixed doubles competition.