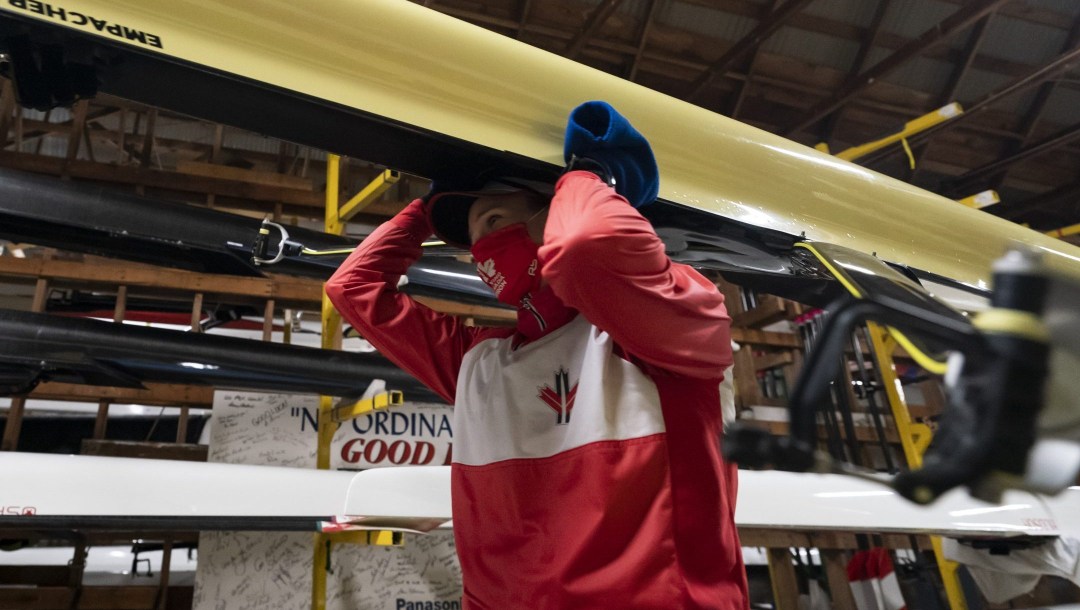 Team Canada rowers train hard on the water in a variety of weather conditions. Sometimes they row together, one behind the other, and sometimes they compete side-by-side. Their training also includes visits to the gym, where their favourite device is… the rowing machine, of course.

Discover more about the daily lives of Canadian rowers and see how they manage to train while maintaining their good sense of humour.

Check out this hypnotizing video to see how impressive the synchronized movements of these Canadian rowers are! Spending several hours together moving at the same pace, we understand why Kasia replays this video in her head.

Kasia was a member of the women’s eight team that finished just off the podium at the 2019 World Championships.

While they can move in perfect sync, rowers also like to bring out their competitive spirit by competing in head-to-head races. Who better than a teammate to motivate them to give their best in training? Conlin McCabe and Kai Langerfeld know all about friendly competition.

McCabe, a silver medallist in the men’s eight at London 2012, is aiming for a third Olympic appearance after a sixth-place in the four at Rio 2016.

Rowing is a great way to enjoy the outdoors and train in a constantly changing, sometimes postcard-worthy environment. Who doesn’t like spending a day at the lake? Hopefully Maxwell Lattimer took the time to appreciate the scenery!

Lattimer won gold at Toronto 2015 in the men’s lightweight four event, and was a member of the Olympic team at Rio 2016, where they finished 13th.

Watching these four rowers in this hazy, surreal setting is meditative. Looks like the calm before the storm for members of the eight that finished eighth at the 2019 World Championships.

Did the rowers find their pot of gold at the end of the rainbow? The sky seems to be sporting its finest appearance to encourage Madison Mailey and her teammates during their training.

At the 2019 World Championships, Madison was a member of the coxless four team that finished in eighth place.

Athletes like to change up their training by playing other sports. Below, Madison is all smiles while cross-country skiing, but in the following video, it seems less easy for some teammates.

While nature often seems to be on their side, it also can be unfriendly by creating less than ideal training situations. Hats and gloves were a requirement for Will Crothers and the other members of the men’s eight during this winter water outing.

Crothers is aiming for a third Olympic appearance at Tokyo 2020. Like McCabe, he was a member of the eight that won silver at London 2012 and the four that finished sixth at Rio 2016.

Although the view is less spectacular in the gym, rowers spend several hours there daily. Based on the Instagram accounts of national team members, the rowing machine is likely the device they spend the most time on. Check out the second photo to see Andrea Proske grit her teeth and showcase the intensity of the rowing sessions.

Proske finished fourth in the women’s double sculls at the 2019 World Championships and is working hard in the gym to reach her full potential.

Over the past year, many athletes from several different sports have participated in virtual competitions. Carling Zeeman, who finished tenth in the women’s single sculls at Rio 2016, took part in a virtual rowing challenge live from her garage. Did she open the garage door to take advantage of the breeze or simply to appreciate the view?

Lima 2019 Pan Am Games single sculls gold medallist Jessica Sevick tried out a different kind of boat with a few teammates for an afternoon. Did they find it difficult to stand on the SUP board? We don’t know, but it seems like they had a lot of fun.

All those hours spent rowing in sync pays off when it comes to filming entertaining videos. Christine Roper and several members of the national team took advantage of a beautiful sunny day to dive into the chilly April water, choreographing a domino effect. We are recommending they consider a second career in artistic swimming!

Roper, a member of the women’s eight at Rio 2016, is training for a second Olympic appearance.