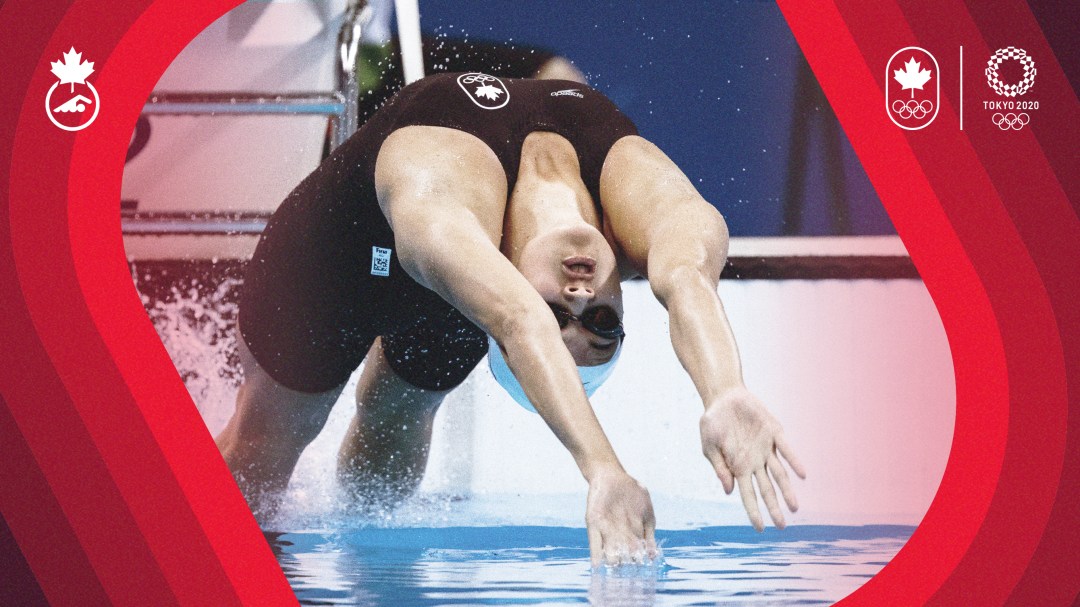 Team Canada will be represented by 24 pool swimmers and two open water swimmers at Tokyo 2020.

Six of those pool swimmers – Margaret Mac Neil, Kylie Masse, Penny Oleksiak, Sydney Pickrem, Taylor Ruck, and Markus Thormeyer – had received provisional nominations in late January, based on their results at the 2019 FINA World Championships where they were a finalist and the top Canadian in one or more events. In the cases of Mac Neil, Masse and Pickrem, they were all individual medallists.

During the recent Canadian Olympic Swimming Trials presented by Bell which finished up on Wednesday night, those swimmers added more events to their schedules for this summer while others locked up their Olympic spots for the first time. Swimmers needed to achieve the ‘A’ qualification standard time in their respective event and finish top two in the final to be nominated to Team Canada in an individual event.

In perhaps the race of the meet, Oleksiak won the 100m freestyle on Tuesday night, giving her the opportunity to defend her gold medal from Rio 2016. At the Trials, she touched the wall in 52.89s, less than two-tenths off her national record and the fourth-fastest time in the world this year. There had been only one spot available in the event, with Ruck having gotten an early nomination.

It was five years ago that Oleksiak was the breakout performer of the Olympic Trials before going on to win her four medals in Rio. This year, another teenager, 14-year-old Summer McIntosh, turned heads with her performance. First, she beat Oleksiak to the wall in the 200m freestyle, for which Oleksiak already had a provisional nomination. McIntosh followed that up with a win in the 800m freestyle. In both events, she broke her own 13-14 age group national records.

McIntosh will be a second-generation Olympian, following her mother Jill who competed in swimming at Los Angeles 1984. She is projected to be the youngest athlete on all of Team Canada in Tokyo.

At the opposite end of the age spectrum is Brent Hayden, who at 37 will be Canada’s oldest Olympic swimmer ever. He retired after winning 100m freestyle bronze at London 2012, having lost his love of swimming. But seven years later, he decided to get back in the pool and have another go at the Games. Hayden won the men’s 50m freestyle with his second-fastest time ever to book a spot on his fourth Olympic team. He made his debut at Athens 2004 – two years before McIntosh was born.

There were multiple Canadian records broken at the Trials. Another teenager, 18-year-old Joshua Liendo, got it started in the second race of the week in the prelims of the men’s 100m butterfly, clocking in at 51.40s. He would also earn Olympic berths in the 50m freestyle and the 100m freestyle.

Masse took four-tenths off own Canadian record in the 100m backstroke that she had set en route to winning the first of her two consecutive world titles in the event in 2017. The new mark is 57.70s. Ruck finished second to Masse in both the 100m and 200m backstroke at the Trials.

World junior silver medallist Finlay Knox knocked eight-tenths of a second off his own national record in the 200m individual medley, coming in at 1:58.07, to secure a spot at his first Olympic Games.

In 2016, Katerine Savard was stunned not to qualify for the Games in Rio in her specialty, the 100m butterfly, though she did make the team in the 200m freestyle and won bronze with the 4x200m freestyle relay. But she did not disappoint herself again, finishing second only to provisionally nominated world champion Mac Neil in the 100m butterfly final to qualify for her third Olympic Games.

Thormeyer ensured he would race in at least two events in Tokyo by winning the 100m backstroke, adding to the 200m backstroke in which he had a provisional nomination. He’ll be joined in the 100m backstroke by 18-year-old runner-up Cole Pratt, who made his first senior national team for the 2019 World Championships.

Kayla Sanchez won the 50m freestyle to earn her Olympic ticket. She was also the runner-up to Oleksiak in the 100m freestyle, which sets her up to be a key relay team member. She swam the leadoff leg for both the women’s 4x100m and 4x200m freestyle relays that won bronze at the 2019 World Championships.

On the final night of the Trials, Katrina Bellio set a five-second personal best in the 1500m freestyle, qualifying her to compete in the Olympic debut of the women’s longest pool race.

In addition to the individual events, Team Canada will have swimmers ready to compete in six relays, including the mixed 4x100m medley, which will be included on the Olympic program for the first time this summer.

While the Trials were happening in Toronto, Kate Sanderson and Hau-Li Fan were earning their tickets to Tokyo at the FINA Olympic Marathon Swim Qualifier in Portugal. Sanderson finished third in the women’s race to earn an at-large spot while Fan claimed a continental berth for the Americas region. Both will be making their Olympic debuts. Since open water swimming joined the Olympic program at Beijing 2008, Canada has won one medal, a bronze by Richard Weinberger at London 2012.

Canada has won 49 Olympic medals in swimming, second-most among summer sports. Six of those were won at Rio 2016, behind only the 10 from the boycotted Los Angeles 1984 Games and the eight in home water at Montreal 1976.

Pool swimming at Tokyo 2020 will take place at the Tokyo Aquatics Centre during the first week of the Games, from July 24 to August 1. The open water events will be held in the Odaiba Marine Park, the women’s 10km marathon on August 4 with the men’s 10km race the following day.