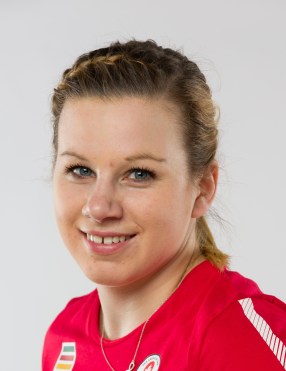 The highlight of Christina Arès-St-Onge’s international career has been competing at the 2013 Pan American Championship where Canada finished ninth, defeating Costa Rica in the final classification match. In 2014 she led her Granby club in scoring in the D1 Circuit Quebecois with 185 points in 16 games, 122 more points than the next closest teammate.

Family: Parents François St-Onge and Linda Arès… Older sister Érika… Younger brother Jason… Getting into the Sport: Started playing competitive handball at age 13 after her current coach at Handball Granby, Marc St-Laurent, came to see her play the sport during a physical education class… Outside Interests: Works as a handball referee… Completed second year of her Bachelor of Education in Mathematics at Université de Sherbrooke… Plays soccer for the Sherbrooke Vert & Or… Odds and Ends: Always listens to music before a game… Nickname: Kri… Inspired by France’s men’s handball team because they win everything but stay focused on work and training…