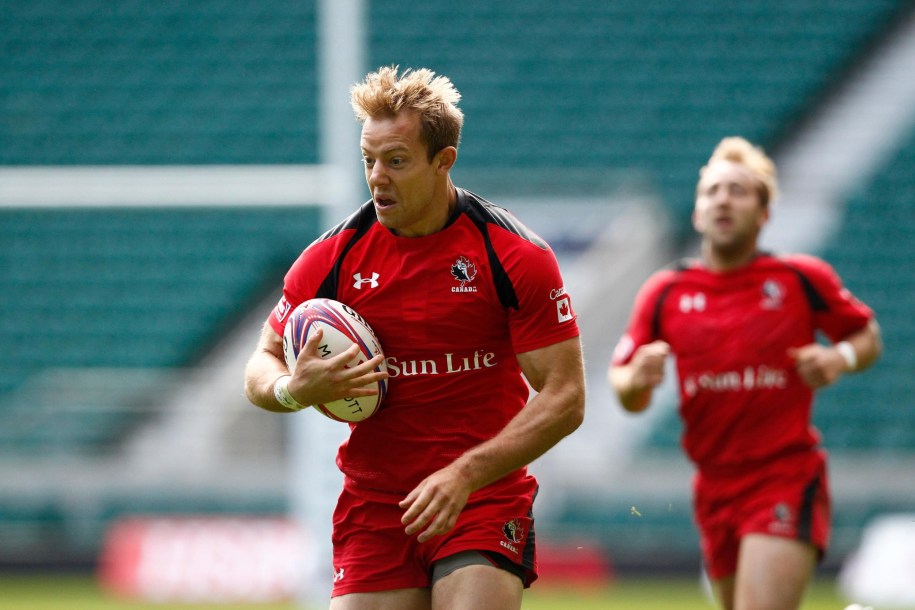 Harry Jones brings leadership and experience to the men’s national team as he shares captain duties with Nathan Hirayama. Since making his debut as an 18-year-old in 2008, Jones has played more than 325 matches on the World Rugby Sevens Series and scored more than 750 points, good for second and third all-time, respectively, for Canada.

After dealing with a serious pelvic injury that kept him out for the better part of two years, he became a full-time member of the senior team in 2012. That year he helped Canada secure ‘core status’ and be promoted to a full-time member on the World Rugby Sevens Series. He also helped Canada qualify for the 2013 World Cup Sevens by winning gold at the NACRA Sevens tournament.

Jones’ first major senior international tournament for Canada was the 2013 World Cup Sevens. He has suited up for Canada twice at the Commonwealth Games (2014 and 2018). In 2015, after finishing as Canada’s highest scorer in the Sevens Series, he helped Canada win gold at the Pan American Games. In the final, Jones scored the game-winning try with just 17 seconds left in front of a packed home crowd in Toronto.

In 2017, Jones had a career highlight at the Singapore Sevens, helping Canada win their first ever Sevens Series tournament. The win helped Canada finish eighth overall in the Sevens Series standings and qualify for the 2018 World Cup Sevens. Following the World Cup, Jones required shoulder surgery and returned to action part way through the 2019 Sevens Series.

In the summer of 2019, he helped ensure Canada wouldn’t miss out on the 2020 Olympic Games. Jones led Canada to an undefeated record at the RAN Sevens in the Cayman Islands, securing their berth at Tokyo 2020. Later that summer he helped Canada take home silver at the Lima 2019 Pan Am Games, scoring one try during the semifinal win over Columbia. In the shortened 2019-20 Sevens Series, he led Canada to their first podium finish on home soil, taking bronze in Vancouver.

As a fly-half in rugby union, Jones represented Canada at the 2015 World Cup in England. He was captain of Canada’s team at the 2009 IRB Junior World Championship in Japan. He also competed for Canada at the Under-17 and Under-19 levels whilst playing in the Canadian Rugby Championship for the BC Bears. He played collegiately at UBC.

A Little More About Harry

Getting into the Sport: Started playing rugby at age 13… His older twin brothers excelled at it so wanted to do what they did… Outside Interests: Earned his Bachelor of Commerce from UBC in 2012 and his Diploma in Urban Land Economics from UBC in 2016, followed by a Bachelor of Business in Real Estate at UBC in 2018… Ambassador for KidSport… Enjoys hiking, camping, fishing, finding good coffee all over Victoria, hot yoga, and cold plunges in the ocean… Odds and Ends: Nickname is H… Uncle Cliff Jones was capped for Canada in rugby 15s… Has kept all of his flight ticket stubs and tournament lanyards from all of his rugby-related travels… Favourite motto: “Nothing beats hard work”…