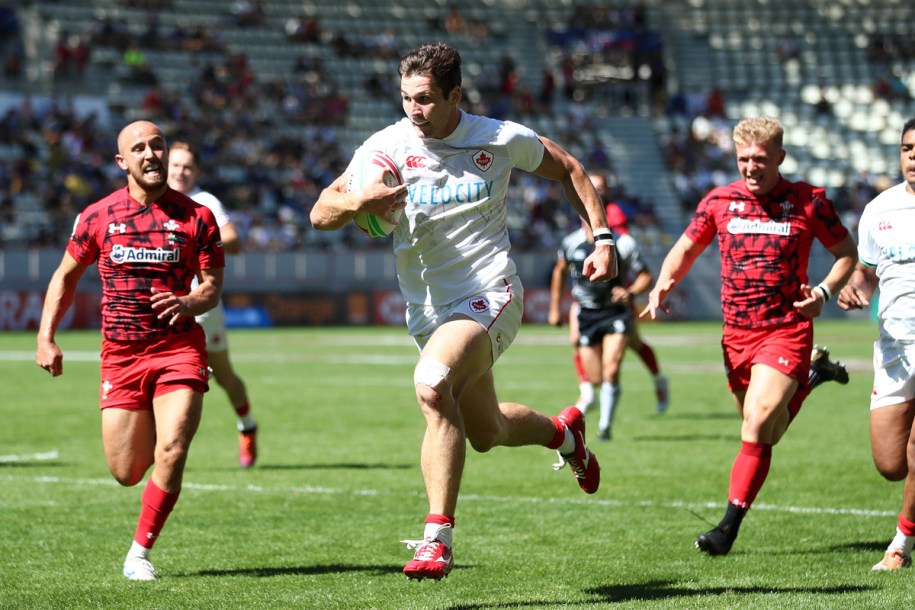 Matt Mullins made his debut with the senior sevens national team in front of a home crowd at the 2015 Toronto Pan Am Games, scoring a pair of tries in his first game. He helped Canada go undefeated and win their second consecutive gold medal at the Pan Ams. He joined the Canadian sevens team for the World Rugby Sevens Series that winter, scoring his first tries during the stop in Singapore.

The next year Mullins became a regular starter for Canada, appearing in 42 matches and scoring 25 points. Singapore would be the site of another career highlight for Mullins, as he helped Canada claim the 2017 Singapore Sevens Cup, the first ever Sevens Series tournament victory for Canada. That win, as well as a bronze medal at the last event of the season in Paris, helped Canada qualify for the 2018 World Cup by finishing eighth in the 2016-17 Sevens Series standings.

After dealing with a back injury that kept him out of two tournaments, Mullins helped Canada finish in the top-10 of the Sevens Series for the second year in a row. He was named to the Canadian teams for both the 2018 Commonwealth Games and World Cup Sevens, scoring three tries at the latter.

In 2019 he played the most matches (53) of any Canadian on the Sevens Series and set a new career high with 15 tries. That summer he won his second gold medal at the RAN Sevens in the Cayman Islands. The win secured Canada’s spot at Tokyo 2020.

Mullins played in two tournaments in the shortened 2020 Sevens Series and scored two tries. Canada finished in the top-10 overall for the third straight year.

Mullins played for Canada 15s at the Junior World Trophy in both 2013 and 2014, winning bronze at the former. He played one season collegiately for Queen’s University before joining the national program in Vancouver. With the Gaels he won the OUA 15s Championship in 2013 and was named a CIS All-Star. He came in third in the National University 7s Championship in 2014.

A Little More About Matt

Getting into the Sport: Started playing rugby at 14, his uncle played and got him into touch rugby at first… Outside Interests: Enjoys reading, skiing, camping, going to the cottage and beach… Currently attending Thompson River University… Odds and Ends: Favourite motto: “Success is where preparation and opportunity meet”…