Across multiple disciplines, from home soil to all over the world, Team Canada athletes owned the podium this past weekend. 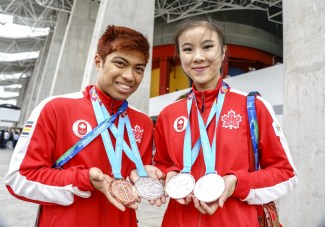 Assadian Jr. (left) and Jinsu Ha, pose for photos with their medals at the Lima 2019.

The Canadian women’s rugby team celebrates after defeating the United States to win the gold medal at the Lima 2019. Photo by David Jackson

Friday evening Team Canada kicked off the 2019 Pan American Games in style at the opening ceremony in Lima, Peru. After an eventful weekend, Team Canada captured a total of 16 medals.

Check out Team Canada’s highlights from day 1 and day 2 of competition and catch the live action on cbcsports.ca and the CBC Sports app.

This weekend concluded the FINA World Championships in Gwangju, South Korea. Team Canada took home a total of eight swimming medals, rewriting the Canadian record for the number of medals won at a World Aquatics Championships set back in 1978.

On Friday, Sydney Pickrem won bronze in the 200m breaststroke to become the first Team Canada woman to win three individual medals at the World Championships.

In the women’s 4x100m medley relay, the team made of Kylie Masse, Sydney Pickrem, Maggie MacNeil and Penny Oleksiak won the bronze medal with a Canadian record time of 3:53.58.

Saturday Kylie Masse captured her second medal at the World Championships in the 200m backstroke. Masse claimed bronze medal with a time of 2:06.62.

Masse and Oleksiak are currently tied for the battle of most medals won by a Canadian female swimmer.

At the Tokyo 2020 test event on Sunday, beach volleyball duo Heather Bansley and Brandie Wilkerson defeated the German pair of Julia Sude and Karla Borger in two straight sets (19-21, 11-21) to capture the bronze.

This is the Canadians’ fourth medal in the 2019 World Tour which will continue until the beginning of September.

Team Canada’s athletics squad had a remarkable weekend at the 2019 Canadian Track & Field Championships and AC World Trials in Montreal.

Thank you to everyone for all the love and support this weekend! #5 and #6 were special. Montreal it’s been real – Until next year ???#ACWorldTrials | #NationalChampion pic.twitter.com/A26ZHFTHil

The story of the weekend was the 100m showdown with Aaron Brown and Andre De Grasse.

On Friday night, in the 100-metre final Brown crossed the line with a time of 10.021 seconds edging Rio 2016 4x100m teammate, De Grasse by three-thousandths of a second.

Brown then utilized this momentum and later capture the gold in 200-metres with a time of 20.03 seconds.

READ: Brown’s and De Grasse’s recent success and rivalry on the track

The #ACWorldTrials continue to deliver! This time the women's 100m hurdles were too close to call without a photo finish.

Can you tell who won?@AthleticsCanada

Don't worry, we won't leave you hanging, it was @phyliciageorge pic.twitter.com/TmRHPOTKiL

In a tight match up with thousandths of a second separating the podium winners, winter and summer Olympian Phylicia George pushed through and became the national champion in the 100m hurdles clocking in with a time of 13.304 seconds.

World decathlon silver medallist Damian Warner won the men’s 110m hurdles in 13.53 seconds. Next Warner will compete in the decathlon at the Lima Pan Am Games.

Melissa Bishop-Nriagu who took last season off to give birth to daughter Corinne had a great performance in the women’s 800m.

This being only the third race since stepping back on the track, Bishop-Nriagu won silver with a time 2:02.40. A promising finish with only being thousandths of a second behind Madeleine Kelly with a time of 2:02.37.