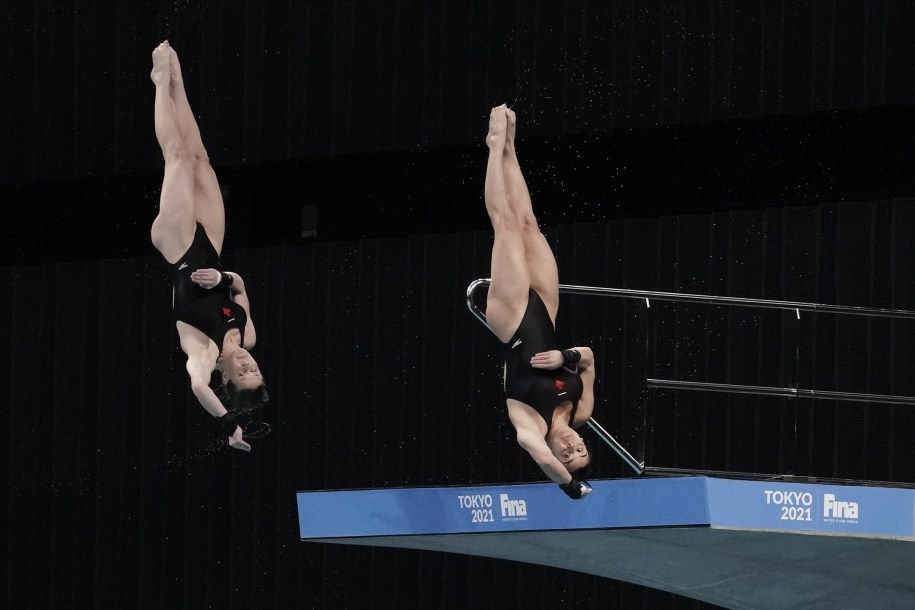 Team Canada secured Olympic qualification in three events for Tokyo 2020 this weekend thanks to some medal-winning performances.

From the pool to the ice to the track, it was a very busy weekend for Canadian athletes. Let’s take a look at what happened:

Booking their return tickets to Tokyo 🤩

READ: McKay and Benfeito win gold to qualify for Tokyo 2020

Canadian divers were in action at the FINA Diving World Cup and two duos earned a return trip to the Tokyo Aquatics Centre for later this summer. Meaghan Benfeito and Caeli McKay gave a gold medal performance in the women’s 10m synchro platform to lock in their spot on the Olympic team.

Vincent Riendeau and Nathan Zsombor-Murray also earned their Olympic nomination by winning bronze in the men’s 10m synchro platform event. Jennifer Abel and Mélissa Citrini-Beaulieu — who had already qualified for Tokyo 2020 — claimed silver in the 3m synchro springboard event as they competed at the Olympic venue.

Marc-Antoine Blais Bélanger also had a golden performance at the Pan American Zonal Olympic Qualifier in San José, Costa Rica on Saturday. With his performance, the Canadian fencer will officially compete at Tokyo 2020 in the men’s épée event. Canada had previously qualified the men’s and women’s foil teams as well as two individuals (Gabriella Page and Shaul Gordon) for the sabre events. Leonora Mackinnon came up just short of qualifying in the women’s épée when she finished in second place.

Sarah Pavan and Melissa Humana-Paredes finished in fourth place at the third event in the Cancún hub. The Canadian beach volleyball players dropped their bronze medal match to American’s April Ross and Alexandra Klineman 2-0 (21-16, 21-15), but still hold onto first place in the FIVB World Rankings.

Kicking off a week of curling 🥌

Team Kerri Einarson, including vice-skip Val Sweeting, second Shannon Birchard, and lead Briane Meilleur, came out of the weekend with a 1-4 record at the 2O21 World Women’s Curling Championship, where a top-six finish would secure an Olympic spot for Canada at Beijing 2022.

After dropping their opener 6-5 to Sweden, Team Canada bounced back with a 9-2 victory over the Czech Republic. Saturday was a tough day with two losses against Switzerland (8-4) and the Russian Curling Federation (8-7). After a schedule upheaval on Sunday, they dropped a 7-6 decision to the United States.

There are still eight games to be played in the round robin and Team Einarson will be playing with the support of teams across the country.

De Grasse is back 🔥

As we count down the days to Tokyo 2020, we also count down the days to watching Andre De Grasse on the Olympic track. The Canadian sprinted to second in the men’s 100m final at the University of North Florida Invitational on Friday. De Grasse, running with the Tumbleweed Track Club, finished with a time of 10.05 seconds to secure his second place result.

There was also some good news from the opposite coast. Melissa Bishop-Nriagu ran the 800m in 1:59.04 to win the Chula Vista High Performance Meet #3. That put her under the Olympic entry standard of 1:59:50 in the event in which she finished fourth at Rio 2016.

Several Canadians climbed the podium at the 2021 Pan American Championships in badminton, the results of which will count towards the world rankings and Olympic qualification. Brian Yang started the Canadian medal haul by winning a gold medal in the men’s singles event. Joshua Hurlburt-Yu and Josephine Wu followed suit, taking top spot in the mixed doubles competition.

Michael Woods wore the yellow jersey in the final stage of the Tour de Romandie, having taken the overall lead by winning the penultimate stage. He went on to finish fifth overall in the six-day race, conceding 53 seconds to the winner, Geraint Thomas of Great Britain, in the final stage individual time trial.

Leah Kirchmann finished second overall in the three-day Ceratizit Festival Elsy Jacobs in Luxembourg on the strength of podium finishes in the prologue and first stage. She ended up just 14 seconds back of the winner, Emma Norsgaard of Denmark.