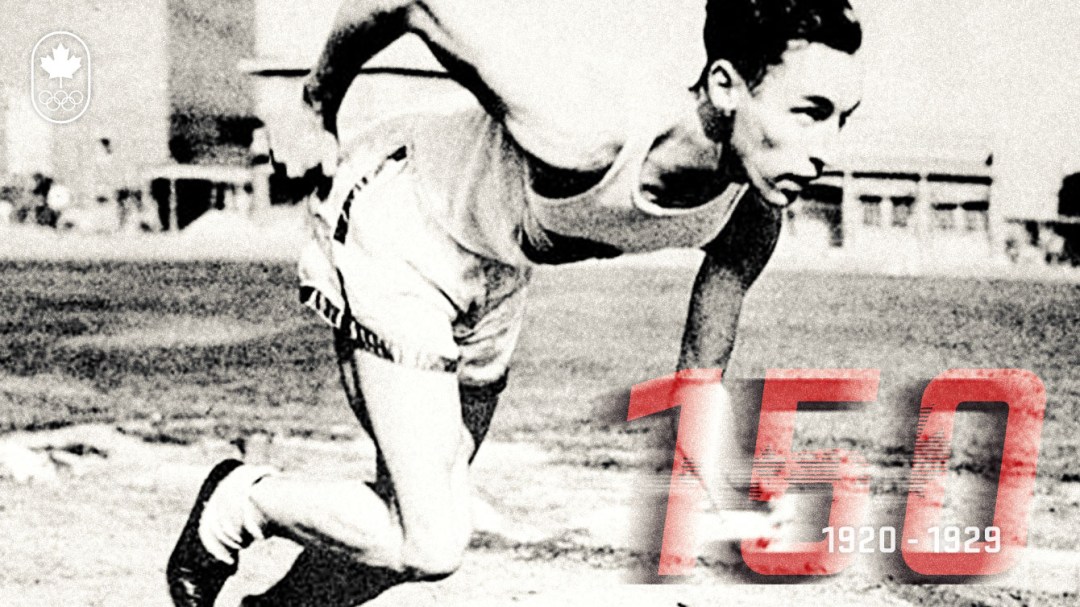 As we continue to reflect on key moments in Canadian sport since confederation, if you find yourself in need of a refresher, all our past installments can be found here.

The 1920s were a decade that represented a break from traditions, some of which were felt in the Olympic world. Women took a more prominent place in international sport while winter sports were given their own Olympic spotlight. 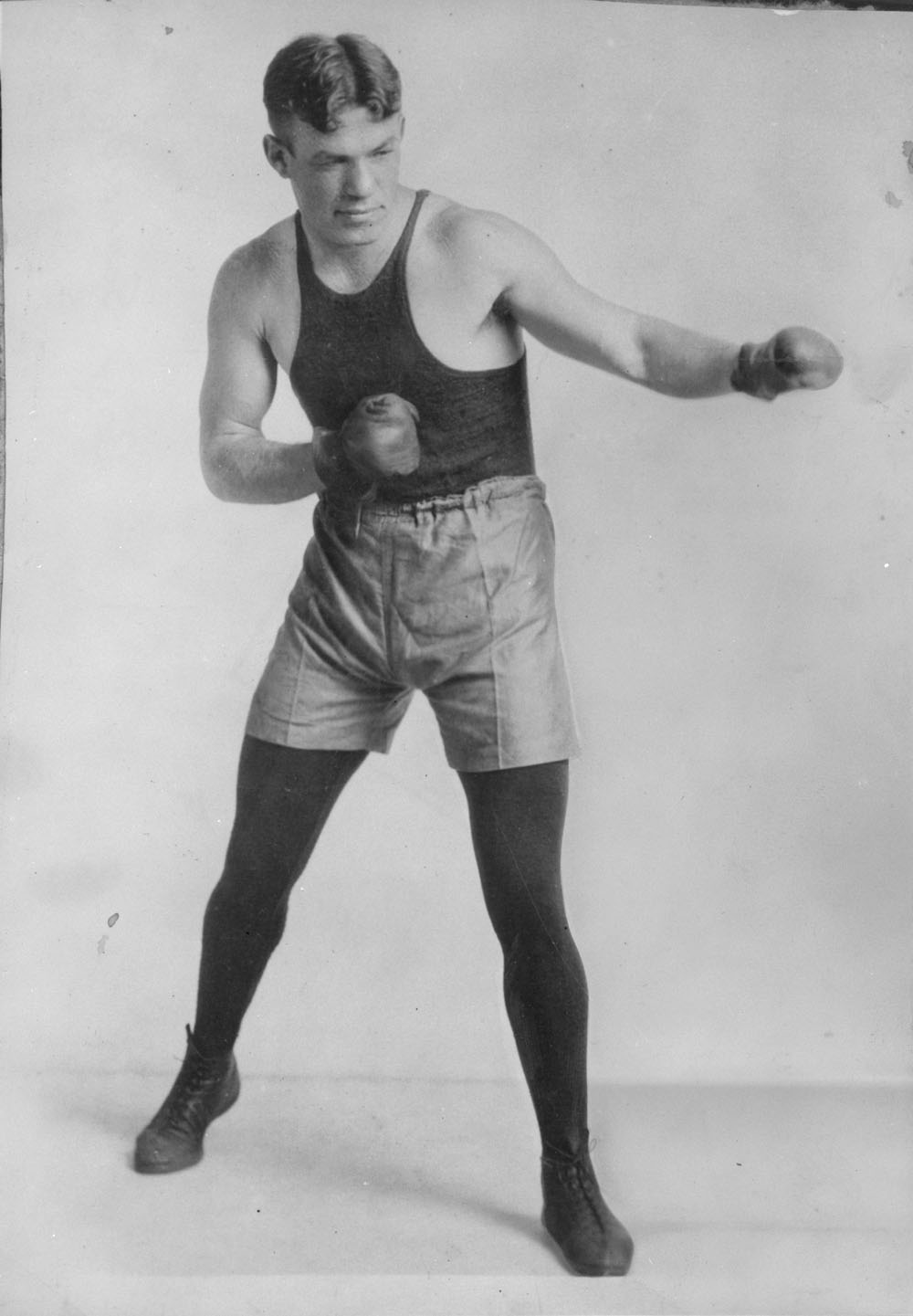 Over the course of the 20th century, Canada has won 17 Olympic medals in boxing. The biggest haul came at the first Games at which Canadian boxers stepped on the podium, Antwerp 1920, where they won five medals in the eight events on the program.

The lone gold came from Albert Schneider in the welterweight division. He had thrown himself into training as a boxer after being barred from joining from Royal Canadian Army at the start of World War I because he was not yet a Canadian citizen. Despite still not having obtained citizenship, he was selected to represent Canada in Antwerp.

Silver medals were won by Cliff Graham in the bantamweight division and Art Prud’homme in the middleweight division. The latter was joined on the podium by Moe Herscovitch, who captured middleweight bronze. A bronze medal was also won by lightweight Chris Newton.

Ice hockey made its Olympic debut before the Winter Games even existed, as part of the program for the summer Games at Antwerp 1920. Canada was represented by the Winnipeg Falcons, who rolled through the competition, scoring 29 goals while allowing just one.

After opening with a 15-0 win over Czechoslovakia, in which Canada did not allow a single shot on goal, the Falcons defeated the United States 2-0 in the semifinal. That set up a final showdown against Sweden, which Canada won 12-1. 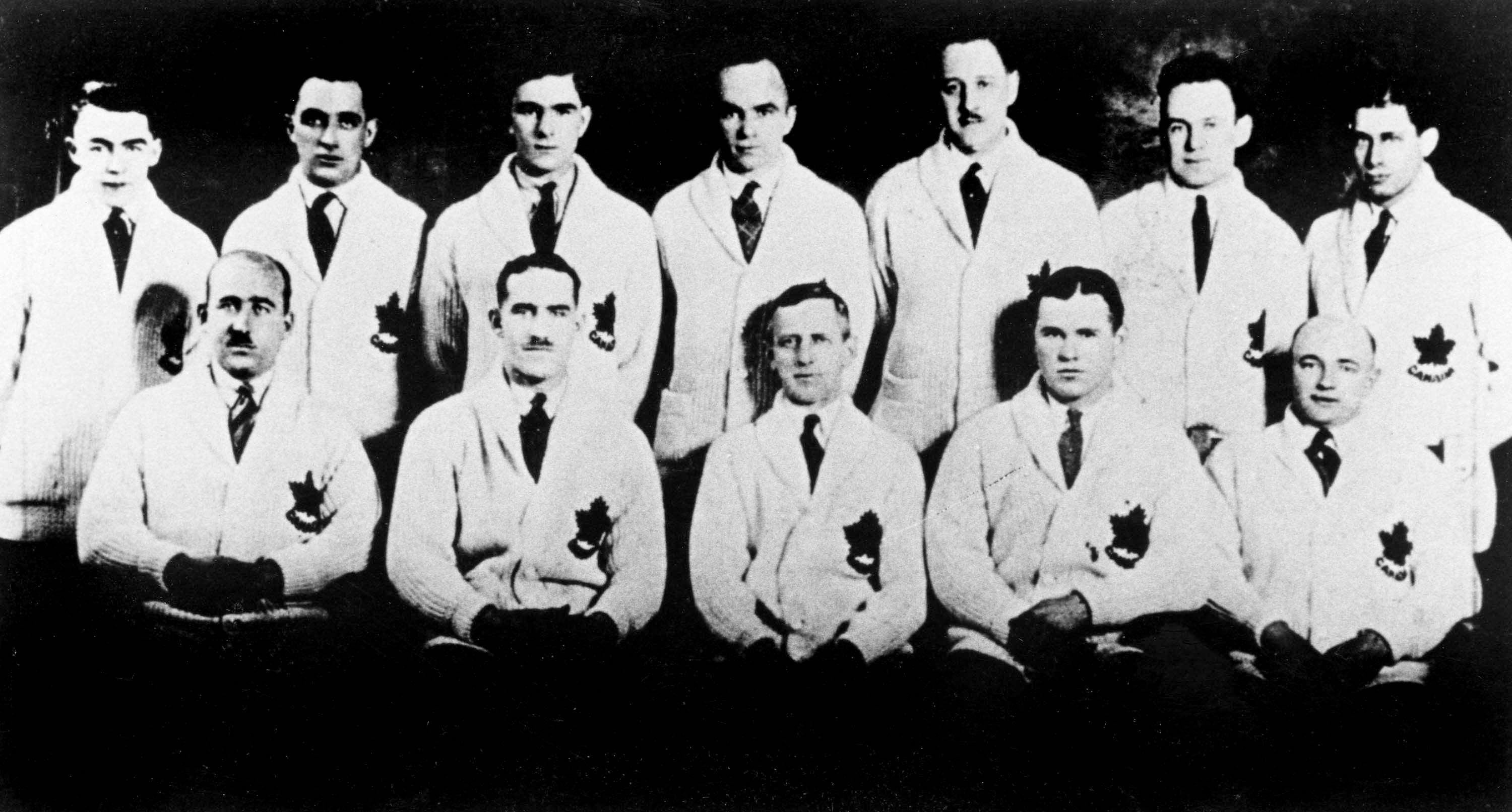 When the first Olympic Winter Games were held four years later in Chamonix, Canada won gold again, courtesy of the Toronto Granites, who displayed tremendous supremacy in outscoring their opponents 110-3, including wins by scores of 30-0 (vs Czechoslovakia), 22-0 (vs Sweden), 19-2 (vs Great Britain), and 33-0 (vs Switzerland). Harry Watson led the way with a record 37 goals in the tournament, including 13 apiece against the Swiss and the Czechs.

The University of Toronto Grads made it three straight gold medals for Canada at St. Moritz 1928, surrendering no goals while scoring 38 of their own.

Over a quarter of a century, from 1915 to 1940, the Edmonton Grads were a true sporting dynasty, tallying 502 wins against just 20 losses.

In 1923, after winning their first national title, the Grads matched up against the American champions, the Cleveland Favorite-Knits, who brazenly displayed their confidence by strutting onto the court wearing shorts with the words “World Champs”. But over two games, the Grads defeated them by a combined score of 53-33 to claim the Underwood Trophy. In 1940 the Grads were given permanent possession of the trophy because they had won it so consistently.

The Grads’ international acclaim also includes four appearances at the Olympic Games, before women’s basketball became an official sport, where they won all 27 of their matches.

Known as “Queen of the Blades” throughout the 1920s and 30s, Lela Brooks won more than 65 championships from the provincial to world level. She also set 17 world records, all in distances measured in the imperial system, such as one mile and the half mile. Six of those came in 1925 when she was just 17 years old.

In 1926 she won the first of her two world allround titles, prior to the International Skating Union formally recognizing a women’s world championship. As a sign of how undeveloped women’s speed skating was at the time, Brooks was the first female member of the Old Orchard Skating Club in Toronto and did not have a formal coach or training regimen.

Brooks competed at one Olympic Games at Lake Placid 1932 when women’s speed skating was included as a demonstration sport. It was the only time she skated metric distances, posting a top result of fourth place in the 500m and 1000m. 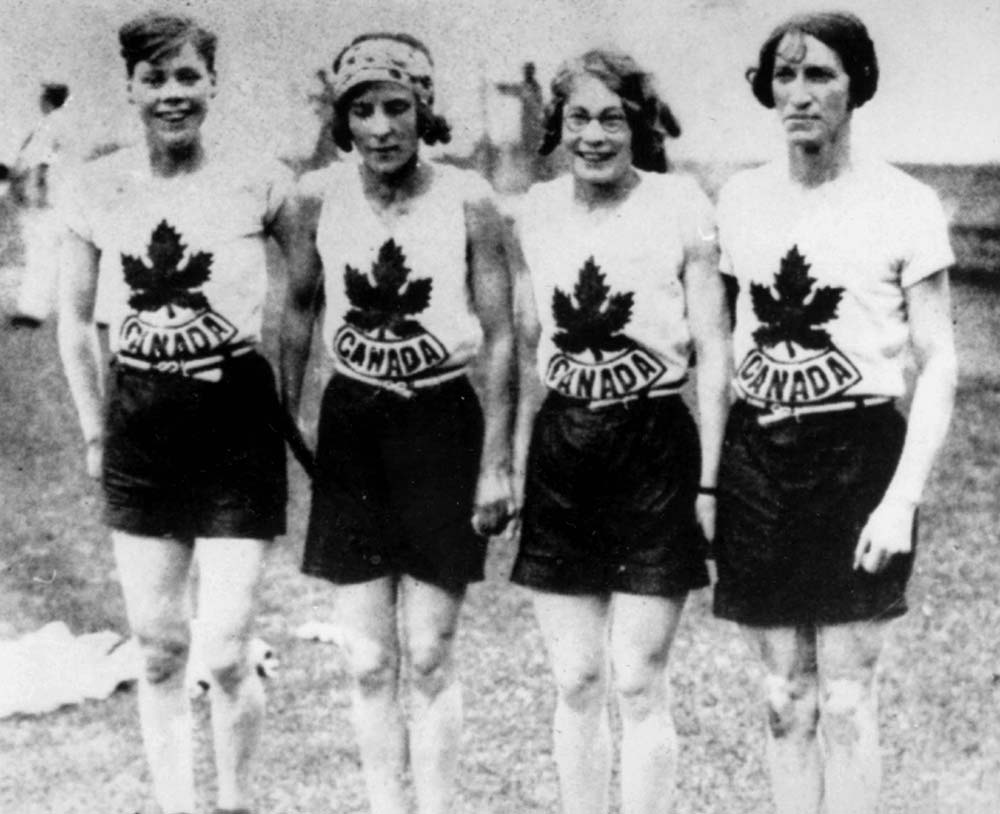 While women’s sports were slowly gaining traction at the Olympic Games, it wasn’t until Amsterdam 1928 that a Canadian summer Olympic team included women. There were just seven of them on a roster of 92 athletes, but they accounted for almost a third of Canada’s 15 total medals.

Bobbie Rosenfeld and Ethel Smith shared the podium in the women’s 100m, winning silver and bronze, respectively. They joined with Jane Bell and Myrtle Cook to win gold in the women’s 4x100m relay, making Rosenfeld and Smith Canada’s first ever female double Olympic medallists. Ethel Catherwood became the first Canadian woman to win Olympic gold in an individual event with her victory in the high jump. That made Canada the only country to win more than one gold medal across the five women’s track and field events in Amsterdam. 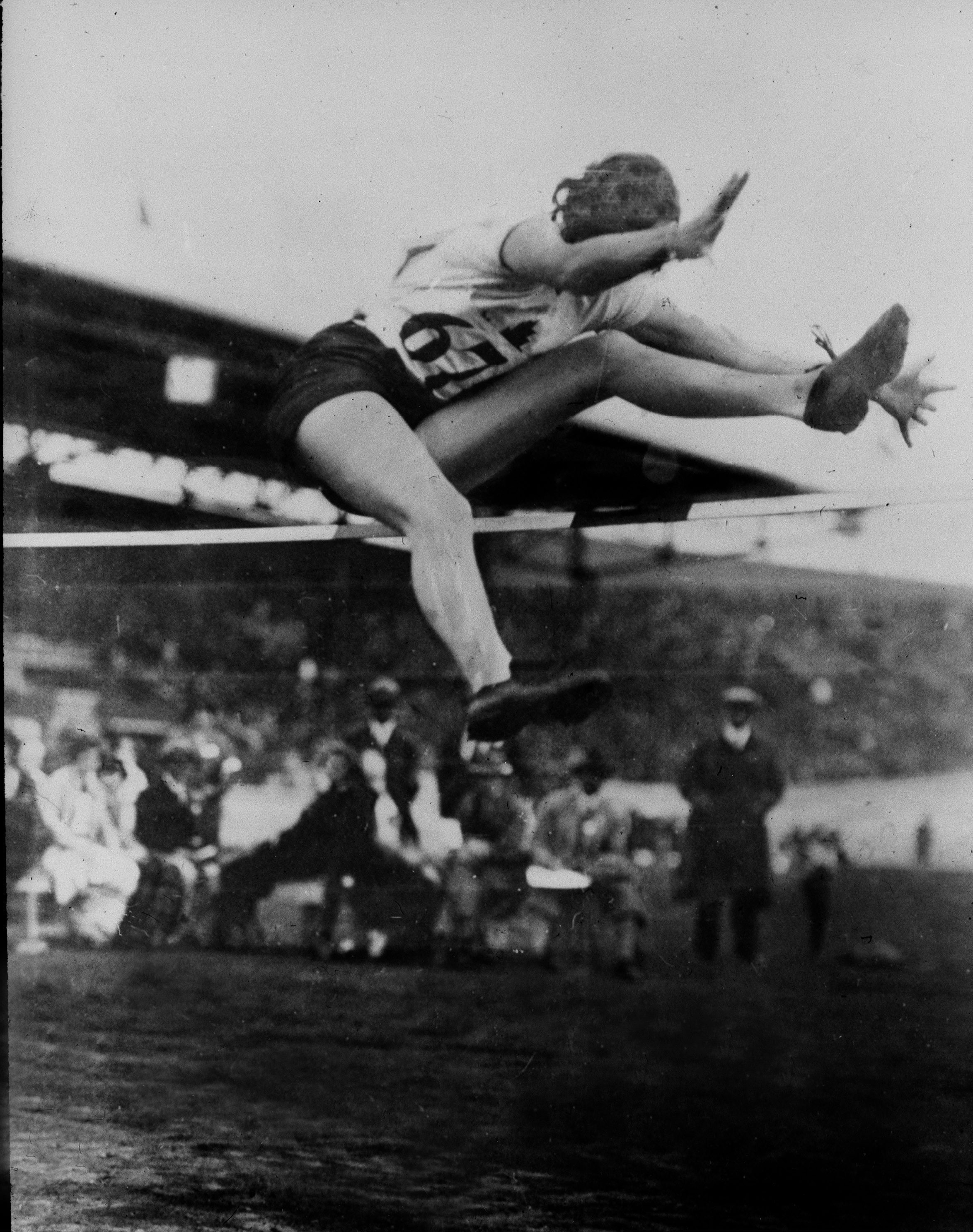 Ethel Catherwood of Canada, winner of a gold medal in the women’s high jump event at the Amsterdam 1928 Olympic Games (CP PHOTO) (National Archives of Canada)

Together with middle distance runner Jean Thompson, who finished fourth in the 800m, they were known as the “Matchless Six”.

At Amsterdam 1928, Percy Williams became Olympic champion in both the 100m and 200m, making him the first Canadian to win two golds in athletics and the country’s second athlete after swimmer George Hodgson to win two golds at a single Games. He is one of just nine men to ever achieve the Olympic sprint double. 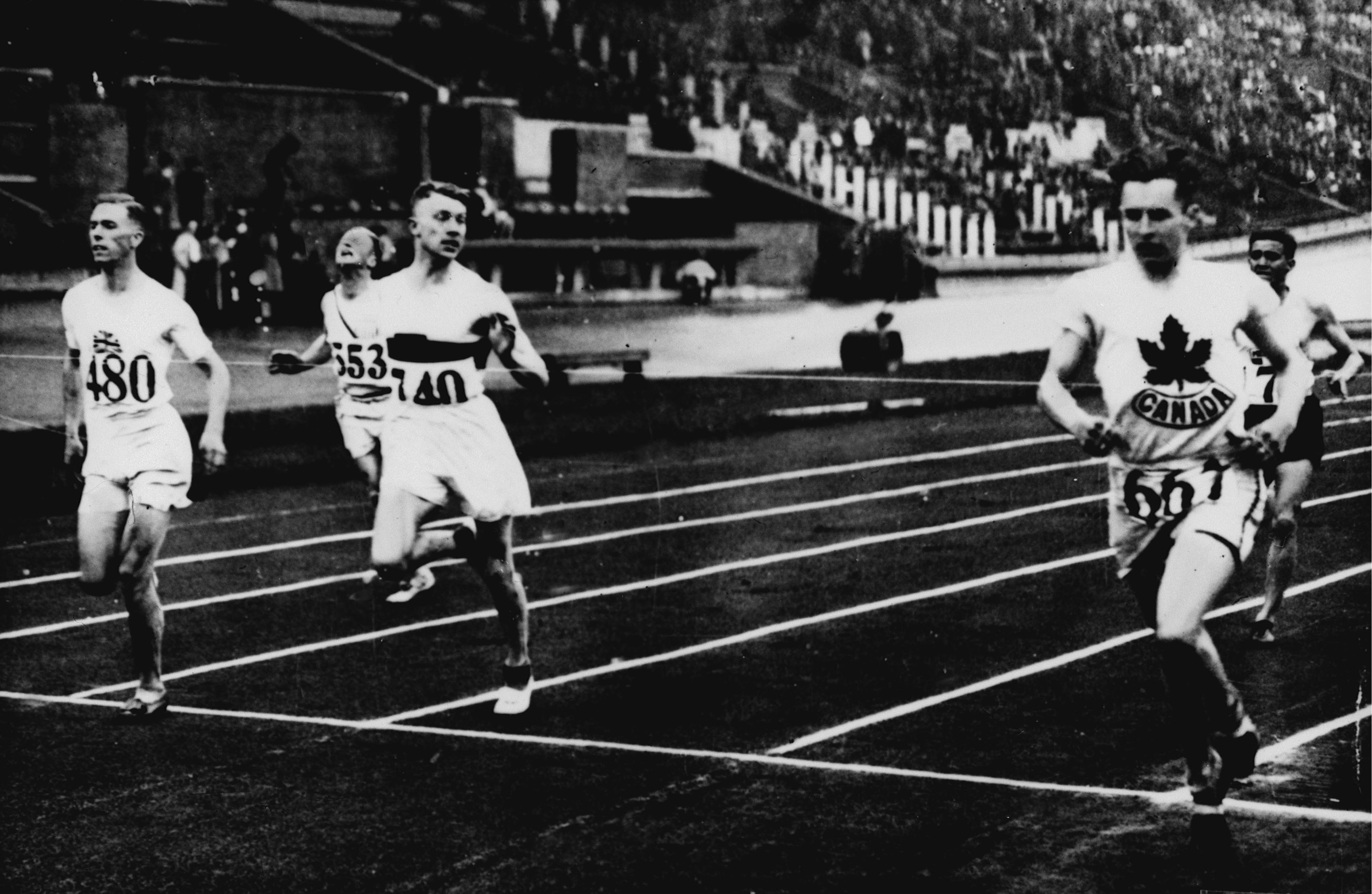 Looking at that success, it is difficult to believe that at age 15 Williams was afflicted with rheumatic fever and was encouraged by physicians to forgo physically demanding activities. Despite those warnings, he began to participate in local high school track meets and four years later found himself at the trials for the 1928 Olympic Games. Never having taken part in a competitive 100m race, he defied the odds by posting a time of 10.6 seconds, matching the Olympic record at the time.

At just 5’6”, the 20-year-old was an unlikely bet for Olympic gold but he made people take notice when he again tied the Olympic record in the second round of the 100m in Amsterdam. In the final, he took the early lead and never relinquished it. His win was such a surprise that organizers had to scramble to find a recording of O Canada, delaying the medal presentation. Just a couple days later, in his eighth race in four days, he pulled away in the final of the 200m to win by almost a yard.