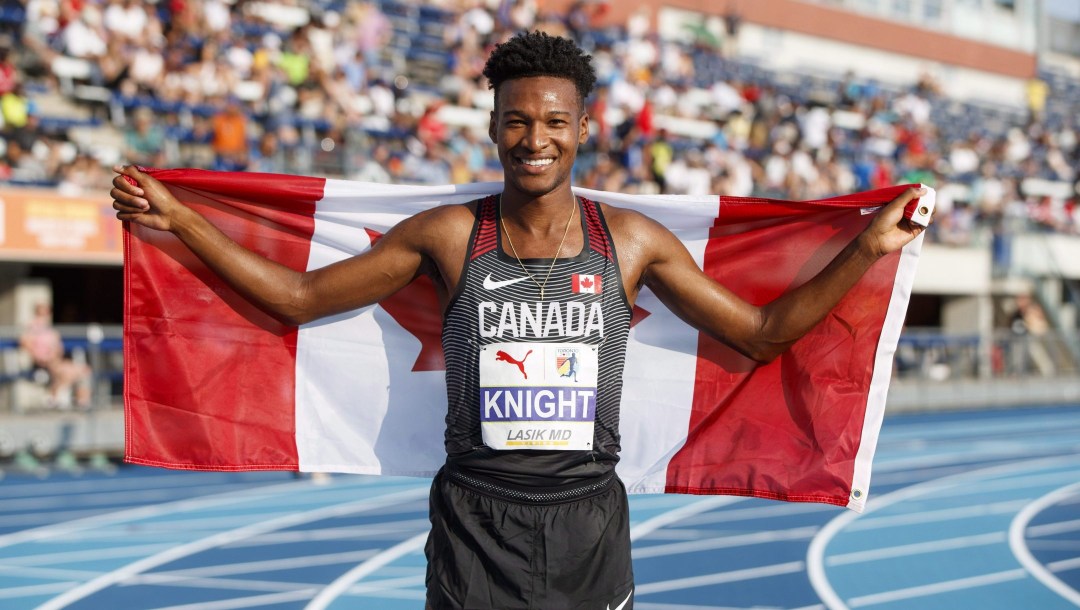 Team Canada is celebrating another tremendous weekend full of comebacks. Keep reading to reveal the details.

The USATF Golden Games in Walnut, California proved fruitful for a few Canadians. Justyn Knight went under the Olympic qualifying standard in the men’s 1500m, finishing second in a personal best 3:33.41, which was well below the 3:35.00 he needed to make himself eligible for a second event for Tokyo 2020. Knight already had the standard in the 5000m.

In the women’s 1500m, Gabriela Debues-Stafford laid down a season’s best time of 4:00.69 to finish second. She had previously achieved the Olympic standard in the event.

Melissa Bishop-Nriagu finished third in the 800m and, for the second straight weekend, she ran faster than the Olympic qualifying standard. Her time of 1:58.62 is her best since returning from giving birth to daughter Corinne in July 2018. What a way to celebrate Mother’s Day!

Team Canada gets ticket to Beijing 2022 🥌

After a 1-5 start to the tournament, Team Canada finished strong at the World Women’s Curling Championship in Calgary and secured the country a spot in the women’s Olympic curling tournament at Beijing 2022. Team Einarson did not give up and reeled off five straight victories during the round robin to secure the quota spot.

On Saturday, Canada fell 8-3 to Sweden 8-3 in the qualification round of the playoffs to eliminate skip Kerri Einarson, third Val Sweeting, second Shannon Birchard, and lead Briane Meilleur from medal contention.

READ: McKay comes from behind to win bronze at Diving World Cup

Just before the weekend, Rylan Wiens and Caeli McKay added to Canada’s medal haul from the previous weekend at the FINA Diving World Cup in Tokyo. Sitting in fifth place entering the final dive, McKay came from behind to win her first individual medal in a major international event.

World Comeback of the Year 🙌

Congratulations to Max Parrot on winning the 2021 Laureus World Comeback of the Year Award!

“When I look at this trophy, I see tough moments, pain, smiles, evolution, hardwork, wins, lost, lessons, not giving up, changes.” Parrot took to instagram on Thursday to share his gratitude. “The journey behind this award has changed who I am as an athlete but also as a person, and I am extremely proud of this. Thanks to everyone who has been involved. With no doubts, this trophy represents my greatest life achievement so far.”

After winning his battle with Hodgkin’s lymphoma, Parrot wasted no time in reclaiming his place among the world’s snowboarding elite by winning three gold medals at the X Games. In January and March 2020, he won gold in Big Air in Aspen, Colorado, and slopestyle in Oslo, Norway.

Samantha Stewart won the 53kg bronze medal after leading the match 10-0 at the World Olympic Qualification Tournament in Sofia, Bulgaria. Stewart had been seconds away from qualifying for her first Olympic Games but fell short when she was taken down with under five seconds to go in the semifinals.

Team Canada has secured four quota spots in wrestling for Tokyo 2020. In the women’s competition, the 76kg and 68kg were seized by Erica Wiebe and Danielle Lappage. On the men’s side, Amar Dhesi and Jordan Steen picked up the 125kg and 97kg spots.

Carter Woods started the ICU World Cup circuit on a high, climbing the top step on the podium for the first time in his career. The Canadian rider came back from behind to claim his spot in the U23 UXO men’s event in Albstadt, Germany on Saturday. Earning his fastest lap time during his final lap, Woods launched from behind to steal the gold medal.

Canadian Gaby Dabrowski and her Dutch partner Demi Schuurs finished as the runners-up at the Mutua Madrid Open. The pair fell 6-4, 6-3 in the final to No.7 Barbora Krejcikova and No.8 Katerina Siniakova of the Czech Republic.

At the Italian Open, an ATP Masters 1000 event, Félix Auger-Aliassime won his first round match in three sets. Denis Shapovalov will take to the court on Tuesday against Polish player Kamil Majchrzak. Ahead of that match, he will play a doubles match with Rohan Bopanna on Monday. Bianca Andreescu announced that she had withdrawn from the WTA tournament because of COVID-19 rules in Italy.

Connor Fitzpatrick and Roland Varga will be heading to Tokyo 2020 this summer, competing in the men’s C2 1000m event. The pair earned their ticket by winning two races in the C2 1000m finals to meet selection criteria. This will be the first Olympic Games for both.