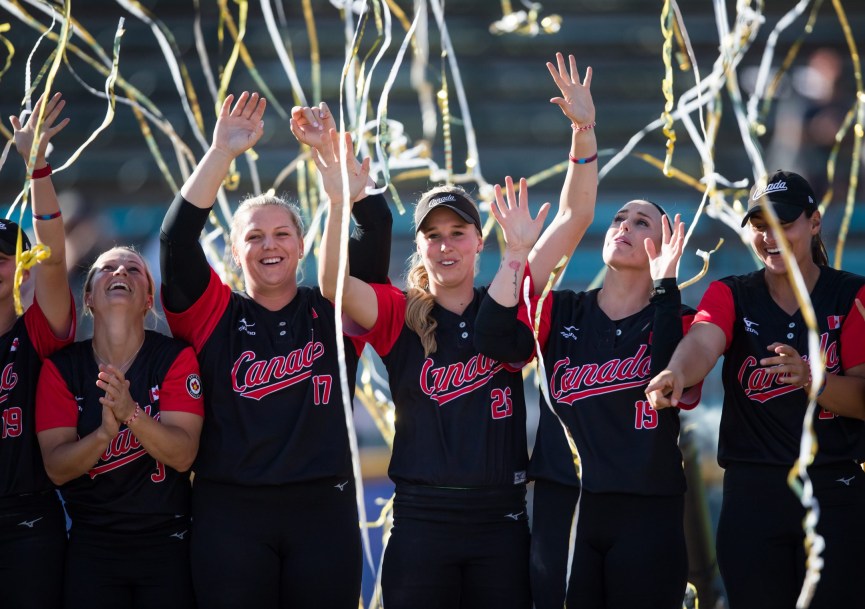 Curveballs. They’re unexpected, unpredictable and sometimes – no matter how much you prepare — they can catch you off guard.

For softball athletes, the uncertainty of ever being able to compete in the Olympic Games was just that.

Beijing 2008 marked the last time softball was on the Olympic docket; a disappointment for athletes in the sport who knew they may never have the chance to compete at the Games ever again.

“I obviously was very sad,” Jenn Salling, a member of the Beijing 2008 team, told Olympic.ca in December 2019. “But I think it was even more sad for the youth who have dreams of becoming an Olympian and maybe they stopped playing softball. My heart broke for the ones who may never [get to] experience the Olympics and could have. I was just super grateful that I even got to do it one time.”

That feeling of despair was somewhat absolved eight years after the final pitch in Beijing. The International Olympic Committee made the decision – at the request of the Organizing Committee – that after a 12-year absence, softball would be back on the Olympic program for Tokyo 2020.

For Team Canada softball athletes, that announcement will forever be a moment etched in their minds as they added a new goal to their list.

“My dream of being an Olympian was renewed when they reinstated it into the Olympics in 2016,” said two-time Pan American Games silver medallist, Victoria Hayward, who joined the national team in 2009. “I was overwhelmed and it brought me to tears, knowing that people could once again dream about playing on the world’s biggest stage.”

Salling was scrolling Twitter that morning when she saw the news and had to do a double take.

“I was almost in denial, like, is this real life?” she recalled. “A whole whirlwind of emotions.”

The emotional announcement not only renewed the energy of active athletes, but was life-changing for retired ones too, such as two-time Olympian Lauren Regula.

“In [Athens] 2004 my highlight was when we beat Japan, and in [Beijing] 2008 it was beating China in a must-win game in their home country,” said Regula. “Then, I put my glove away and had three children with no intention of ever playing again. In 2016 I got an offer to come out of retirement eight years after I last stepped on the field.”

At the time, Regula was battling postpartum depression. Now, the decision to give softball one more moment in the Olympic spotlight has helped give her life new meaning.

“To think I have an opportunity to play in another Olympics is so surreal, as it wasn’t too long ago I was diagnosed as passively suicidal with no interest in anything. I was a hollow shell of myself, never mind becoming someone who put all the work in to get in shape to compete at an Olympic level. To say my life is a complete 180 is an understatement. To think I made it through the darkest times of my life and here I am with this opportunity is a dream,” Regula shared with Olympic.ca.

But it’s not only a dream come true for the veterans. For some first time Olympic team members like Janet Leung, it is a full circle moment.

Recalling when she first took interest in softball, Leung remembers watching Regula and Salling along with Danielle Lawrie and Kaleigh Rafter at Beijing 2008 and seeing them as role models. Fast forward a decade, the women she once looked up to are now her teammates.

“We were watching one of their games on our tiny T.V. in the kitchen and I remember having my eyes glued to the screen cheering for them,” said Leung. “Watching them on the biggest stage sparked my dream to play on Team Canada when I got older.”

Getting fans reenergized about softball with the hopes of getting it back onto the Olympic program was high on many people’s agendas.

Hayward, now a 12-year veteran of the national team, along with other players and staff, made it their mission to rally old and new fans to learn about softball and show the global impact of the sport.

“We ran events and made it possible to invite every single country in the world,” Hayward told Olympic.ca in December 2019 of their efforts to grow the game globally. “We were lucky. We opened doors to them and had the biggest softball event ever.”

The commitment and immense perseverance are not lost on Jenna Caira.

The three-time Pan Am Games medallist knows the hard work it took to get to this moment, along with the continual work needed until they step out onto the field this summer in Japan.

“Every single person on our team has either quit their job, took a leave of absence from school or work to give 100% commitment to help Softball Canada qualify for the Olympics – a moment our games has waited for for 12 years,” said Caira, who also shared that it was on her fourth birthday she announced to her family that she wanted to go to the Olympics when she grew up.

“It was heartbreaking when they took softball out of the Olympics after 2008. I joined the team in 2009 and continued playing, even though I knew softball wouldn’t be back in the Games for a long time,” she said of trying to keep the sport alive in Canada. “I remember watching the 2012 Olympic Opening Ceremony on T.V. and someone said, ‘Wow it’d be so cool to be there’ and I got emotional because I wasn’t sure what the future looked like for my sport.”

Now the team is ready to take on any challenge that comes their way. Their sights set on the podium after a fourth-place finish at Beijing 2008. A large core of the team won bronze at the 2018 World Championships.

For many, Tokyo 2020 may be their last shot at playing on an Olympic field as softball will not be included at Paris 2024.

While it may be uncertain when the softball will next return to the Olympic Games, the players know that focusing on what they can achieve in Tokyo will truly be a once-in-a-lifetime opportunity.

In the words of Salling: “I think it’s really important that we celebrate it’s back and in a country that absolutely loves the sport.”