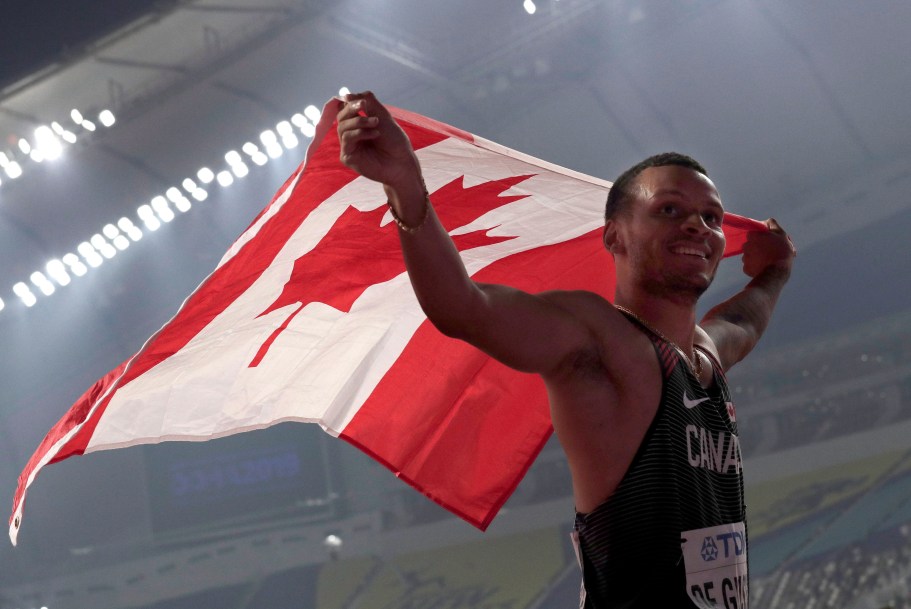 Canadian sprinters Andre De Grasse and Aaron Brown had a fruitful weekend, highlighting a busy few days for Team Canada. Read on and catch up on the latest:

Twice as nice for De Grasse and Brown ✌

The highlight of the weekend came courtesy of Canada’s sprinting duo, who raced to a double podium finish in the 200m event at Diamond League on Sunday.

American Kenneth Bednarek took gold with a time of 20.33s. Brown trailed just behind at 20.79s to take silver with De Grasse clocking in at 20.85s for bronze.

The successful run at Diamond League came on the heels of two bronze medals earlier in the week at the Ostrava Golden Spike. De Grasse finished third in the 100m while Brown took home bronze in the 200m at the event last Wednesday.

Sliding into a Beijing 2022 quota spot 🥌

Kerri Einarson and Brad Gushue earned a fourth place finish at the Mixed Doubles Curling Championship in Aberdeen, Scotland this past weekend to lock up a quota spot for Canada at Beijing 2022.

The duo’s 6-2 victory over Czech Republic on Friday officially gave Canada a top-three finish in their pool, qualifying the team for the mixed doubles event at the next Winter Olympics. Team Canada will now compete in all three Olympic curling events in Beijing.

Einarson and Gushue had a chance to reach the podium as well, but came up short against Sweden in the bronze medal game on Sunday.

Tennis star Denis Shapovalov made waves at the Geneva Open this weekend, advancing to his first ever final on a clay court and third ATP final overall.

The Canadian came in as tournament’s No. 2 seed behind only Roger Federer and did not disappoint. Shapovalov defeated Italian Marco Cecchinato in the round of 16, Serbian Laslo Đere in the quarterfinal, and Uruguayan Pablo Cuevas in the semis.

The Richmond Hill, Ont., native was eventually bested 7-6(6), 6-4 by Norway’s Casper Ruud in the final on Saturday.

On Sunday he announced that he would be withdrawing from the upcoming French Open due to a shoulder injury. Shapovalov remains the top-ranked Canadian on the ATP Tour at No. 14.

Sticking with tennis, Bianca Andreescu made her long-awaited return to the court on Monday.

After seven weeks off with an ankle injury that forced her to miss the Billie Jean King Cup, Andreescu came back looking as sharp as ever. She defeated Spain’s Andrea Lazaro Garcia 6-1, 6-2 in the round of 32 at the Strasbourg Open in her first match (and win) on clay in nearly two years.

She continued her success in the second round, defeating Belgium’s Maryna Zanevska in straight sets 6-1, 6-4. However, the Canadian later withdrew her spot in the quarterfinals after suffering an abdominal injury in her match against Zanevska.

Andreescu plans to return to the tennis court later this month at the French Open.

It’s been a rocky start for Canada at the IIHF World Championship in Latvia as they’ve gone winless through their first three games.

Most recently, they fell 3-1 to Group B leaders Germany on Monday despite dominating the shot clock 31-17.

The good news for Canada is that they’ve got plenty of time to get back on track – plus they’ve got history on their side: The Canadians have medalled in four of the last five IIHF Worlds, winning silver at the most recent tournament in 2019.

Golden State Warriors forward Andrew Wiggins announced his commitment to play for Team Canada this summer in an Instagram post on Monday. The Toronto native will suit up for Canada at the upcoming Olympic Qualifying Tournament in Victoria, B.C., where the senior men’s national team will look to book their ticket to Tokyo 2020. Several other NBA stars have also expressed their desire to represent the North including R.J. Barrett, Khem Birch, Dillon Brooks and Luguentz Dort.

Canada will have its largest Olympic fencing team since Beijing 2008 this summer. Five men and four women will represent Canada at the upcoming Summer Olympics in Tokyo.

READ: Four wrestlers ready to go to the mat for Canada at Tokyo 2020

Canada will send a small, but mighty wrestling team to Tokyo this summer. Leading the way is reigning Olympic champion Erica Wiebe, who won 75kg gold in her Olympic debut at Rio 2016. She’ll be joined by Danielle Lappage, Jordan Steen and Amar Dhesi on the mats in Tokyo.

Canada Soccer’s Women’s National Team will hit the field in June as they continue their preparations for the Olympic Games this summer. As part of the last window on the FIFA Women’s International Match, Team Canada will take on the Czech Republic and Brazil in a pair of international friendly matches in Cartagena, Spain on June 11 and 14.