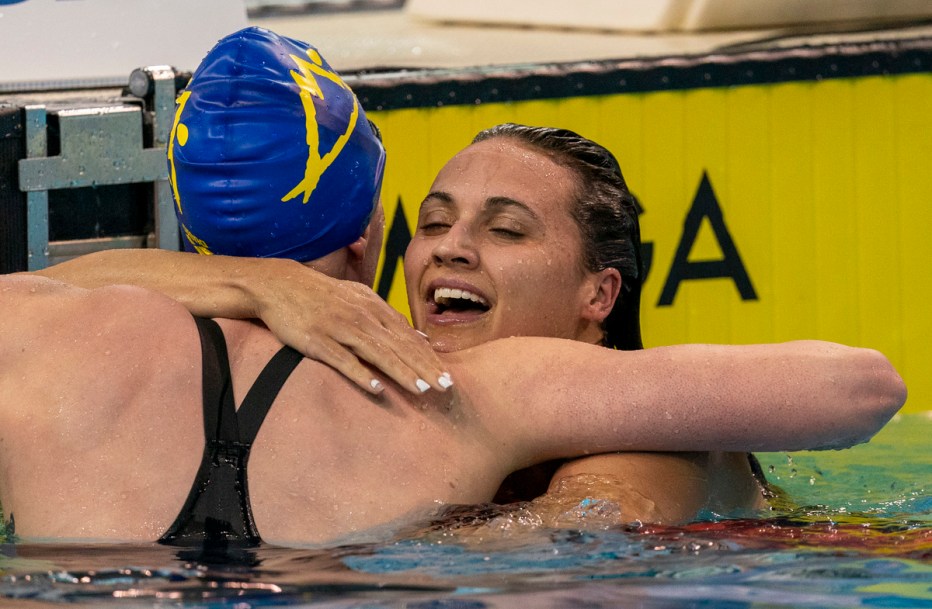 See which swimmers are headed to Tokyo this summer.

A familiar face in Kylie Masse and a fresh face in 16-year-old Katrina Bellio stole the show as the Olympic Swimming Trials presented by Bell wrapped up on Wednesday night in Toronto.

We’ve seen a couple stellar breakout performances already from young swimmers in 18-year-old Joshua Liendo and 14-year-old Summer McIntosh at these trials, and it was Bellio who added her name to that list tonight.

The Mississauga, Ontario native blew the competition out of the water in the women’s 1500m freestyle final, setting a five-second personal best and taking first with a time of 16:29.67. By finishing under the Olympic qualifying time, Bellio is qualified for nomination in the event that will make its debut at Tokyo 2020.

In terms of name recognition, the big race of the day was the women’s 200m backstroke final as Olympians Kylie Masse and Taylor Ruck went head to head. Masse was already provisionally nominated for the event, leaving one spot for the taking.

The Canadian record holder demonstrated why she’s already nominated as she took gold with a time of 2:06.67. The pace was less than a second off her personal best and the sixth-best time in the event this year. Ruck took silver with a time of 2:09.26, good enough to earn nomination for Tokyo.

Moving onto the women’s 400m individual medley, Sydney Pickrem was already holding a provisional nomination, leaving just one spot up for grabs. That spot went to 22-year-old Tessa Cieplucha, who came in second just behind Pickrem with a personal best time of 4:37.26.

Collyn Gagne had a dominant performance in the men’s 400m individual medley, taking gold with a time of 4:18.65 – nearly five seconds ahead of second-place Tristan Cote. Gagne’s pace was a new personal best but not quite good enough to beat the Olympic qualifying time.

Cole Pratt won the men’s 200m backstroke final in 1:58.11, just barely missing the Olympic qualifying time of 1:57.50. Although he missed out on this nomination for this event, the 18-year-old is nominated for the 100m backstroke.

Finally, Eric Brown finished first in the men’s 800m freestyle, the last race of the trials. Though he did not reach the Olympic qualifying time, Brown’s mark of 7:59.87 was a 12-second personal best. The 18-year-old also took gold in the men’s 1500m freestyle on Monday.

With national records broken, several breakout performances, and plenty of Olympic nominations to go around it was a fantastic five days of action at the Olympic Swimming Trials presented by Bell. The nominated athletes now await the official Tokyo 2020 team announcement scheduled for Thursday morning at 10 AM ET.