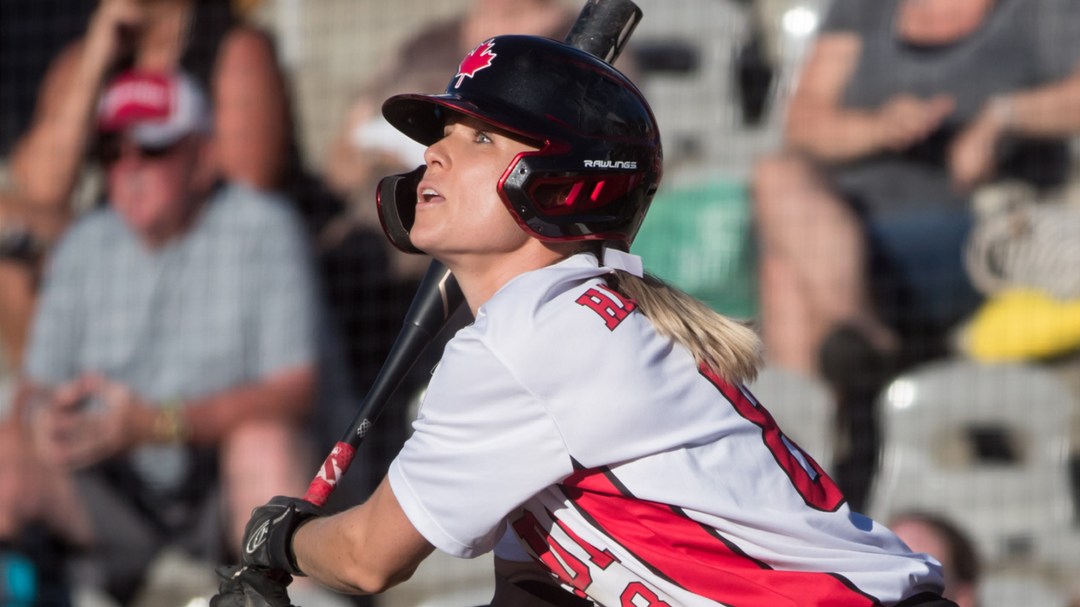 April may bring showers, but it also means the start of the Major League Baseball season!

Now that we know that baseball and softball will make their Olympic comeback at Tokyo 2020, we are throwing the ball into the field of Canadian athletes to see how they prepare for it.

Jennifer Salling hits hard here! The one who represented Canada at the Beijing 2008 Games is training for her sport’s return to Tokyo 2020. Salling has already represented Team Canada at five World Softball Championships and played for the University of Washington Huskies. for three seasons. Most recently, she won silver with the Canadian softball team at Lima 2019 . After more than 12 years of absence from the Olympic Games, she is giving her all to represent Canada well this summer.

Build your strength and let off steam at the same time? Why not. Erika Polidori shows us here the best exercise to get there with her teammate Jenna Caira . Polidori helped Team Canada clinch two bronze medals at the WSBC World Championships in 2016 and 2018, as well as gold and silver at the Pan American Games in Toronto 2015 and Lima 2019.

Last summer when Larissa Franklin was at home during the pandemic, she received the support of her sports federation to install a training system allowing her to be able to train from home. Training with Georgian Bay as a backdrop must have made training a tad easier! =Franklin, who has been on the senior squad since 2013, also contributed to Team Canada’s victory in Toronto 2015, silver in Lima 2019 and podiums at the WSBC World Championships.

Evan Rutckyj contributed to the gold and silver medals at the Toronto 2015 and Lima 2019 Pan American Games. Here you can see the free agent practicing his throws in practice and fine tuning his technique. Do you think he’s going to throw a fastball or a slider?

We always see athletes at their best, but to get there, they have to constantly push their limits. Victoria Hayward openly shares what stepping out of her comfort zone means to her. To date, Hayward is the youngest player ever to be named to the Senior National Team, a team she joined in 2009 when she was just 16 years old. In addition to the five WBSC World Championships medals she has won over the years with the team, she also has two Pan Am Games silver medals, the first in 2011 in Guadalajara, Mexico and the second from Lima 2019.

We know that many of you can understand Rob Zastryzny’s enthusiasm as he returns to his favourite place: the training centre. Zastryzny just signed with the Long Island Ducks (part of the Atlantic League of Professional Baseball) and is a pitcher for Team Canada.

Quarantine certainly has succeeded in making us a little more creative in the pursuit of our objectives and our daily activities. Here, for the second time in our list, Erika Polidori has found new exercises to maintain shape…and change perspective too, perhaps?

What to do when you can’t make it to the batting cage? Bring the batting cage home! Scott Mathieson wasted no time in building one. Mathieson, who played almost eight years for the Tokyo Giants, could return in a few months, but this time representing Team Canada.

Behind the back, between the legs…Kaleigh Rafter uses her creativity to make training drills that will be beneficial on the field. Rafter is one of the softball team’s veterans. She has been a member of the Women’s National Team since 2007 and a member of the team that placed fourth at the Beijing 2008. She also played a year professionally for Team Honda in Japan.

A return to the game for Lauren Bay Regula? Certainly. An Olympian at Athens 2004 and Beijing 2008, the mother of three has challenged herself to pick up the bat again for Tokyo 2020. As she shares here, choosing the right state of mind is important for getting back in pursuit of an Olympic dream.

Agility can be practiced in different ways! Janet Leung chose to take her mind off things with a game of spikeball. In 2018, the Ontarian helped Canada win bronze at the WBSC Women’s World Softball Championship, and was also part of the Lima 2019 Pan Am Games team.