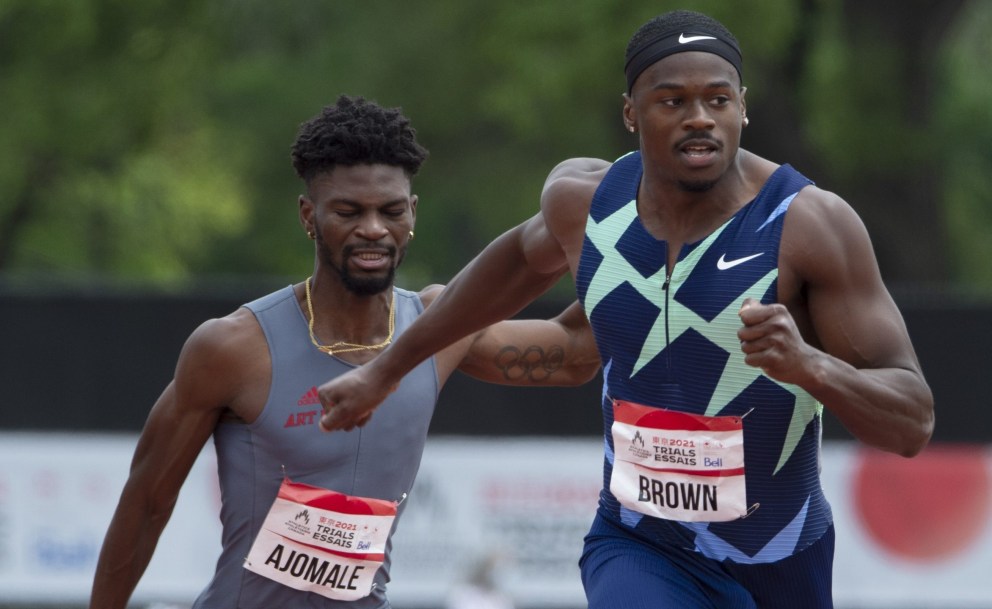 Aaron Brown and Crystal Emmanuel successfully defended their respective crowns in the 100m events on the opening day of the 2021 Olympic Trials presented by Bell as Canada’s top track and field athletes looked to qualify and tune up for Tokyo 2020.

Olympic medallist Aaron Brown won the national title in the men’s 100m for the third consecutive time, clocking in at 10.12s.

Brown along with Andre De Grasse, who did not participate on Friday, were already qualified for both the 100m and 200m events at Tokyo 2020.

Crystal Emmanuel won her fifth straight national title (eighth overall) in the women’s 100m, finishing with a time of 11.18s.

While Emmanuel missed the Olympic standard by a mere 0.03s, the points she earned for winning the event should push her up the World Athletics rankings and earn her a berth at Tokyo.

She has already achieved the Olympic standard for the 200m.

Lindsey Butterworth finished first in the women’s 800m with a time of 1:59.19, mere milliseconds under the Olympic standard to qualify for Tokyo.

Melissa Bishop-Nriagu, who is already qualified for Tokyo, finished second. Madeleine Kelly finished third and could very well earn an Olympic berth as well based on World Athletic rankings.

John Gay dominated the field in men’s 3000m steeplechase, reaching the finish line nearly 30 seconds before anyone else.

By finishing in 8:20.68, the Kelowna, British Columbia native met the Olympic standard.

Canadian record holder Liz Gleadle won the women’s javelin, throwing 59.81m for her 10th Canadian title. However her distance was not quite good enough to meet the Olympic standard of 64m.

Fresh off a new Canadian record in the decathlon at the Hypo-Meeting in Austria, Damian Warner was golden again in the men’s long jump.

His leap of 7.81m was good for first, though short of the Olympic standard.

Warner has already qualified for the decathlon at Tokyo 2020.

Philip Osei took the crown in the men’s 400m. His time of 46.60s was good for gold but over the Olympic qualifying time.

The good news for Osei is that only 18 men have run under the Olympic standard of 44.90s so far. With 48 Olympic spots available it’s likely that he could still earn a berth.

Noelle Montcalm took gold in the women’s 400m hurdles with a personal best time of 56.34s, a second shy of the Olympic qualifying time.

The Belle River, Ontario native finished 18th in the event at Rio 2016.

Alicia Brown ran a season best 51.96s to win the the women’s 400m, just about half a second off the Olympic standard for Tokyo 2020.

Caroline Ehrhardt won gold in the women’s triple jump with a total of 12.98m, short of the 14.32m Olympic standard.

Although he missed the Olympic qualifying time, it was an excellent showing from Heppenstall in his first appearance at senior nationals.

Sarah Mitton won gold in women’s shot put with a distance of 18.21m, finishing 0.29m short of the Olympic standard.

Regan Yee won the women’s 3000m steeplechase, clocking in at 9:31.46 – about a second and a half over the Olympic standard.

Lalonde is already qualified for the event at Tokyo 2020.

Mark Bujnowski took gold in men’s shot put with a distance of 17.35m, not quite good enough to meet the Olympic standard.

Taylor Ehrhardt leads the men’s decathlon after day one with 4053 points thanks to first-place finishes in the long jump and shot put.

Benjamin Preisner made his marathon debut on December 20, 2020 at The Marathon Project in Chandler, Arizona.

Being raised with a special appreciation and value for sport, Alicia Brown has wanted to compete for Team Canada from…