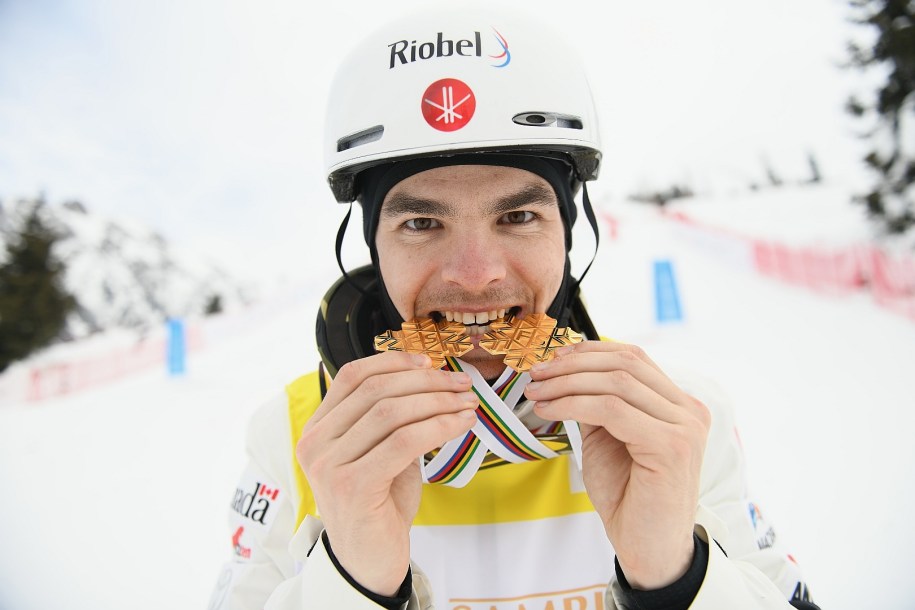 From historic podiums to world championship victories, Team Canada athletes put down impressive performances, made strides in their sport, and brought home numerous medals from all over the globe this winter.

Although the season was not without its challenges — including many presented by the COVID-19 pandemic — from the snow to the ice, let’s take a look at some of the most memorable winter moments for Team Canada.

Marie-Michèle Gagnon brought some great excitement when she returned to the World Cup podium for the first time since 2016. In late January, she skied to a super-G bronze in Garmisch-Partenkirsen, Germany for her fifth career World Cup podium, but the first since she missed almost all of the 2017-18 season due to injury. Gagnon also posted a nice sixth-place finish in the same event at the FIS World Championships in Cortina d’Ampezzo, Italy.

It was also at the world championships where Brodie Seger and Jack Crawford showed they are two to keep an eye on for the future. Seger finished fourth in the super-G while Crawford was fourth in the alpine combined — breakout performances from both men.

While there may not have been any major international medals this season, there were some promising results produced by Canadian biathletes. At the IBU World Championships in Pokljuka, Slovenia the quarter of Christian Gow, Scott Gow, Nadia Moser and Emma Lunder finished eighth in the mixed relay.

We saw several breakout performances from hungry Canadian bobsledders, especially in the women’s monobob, which will make its Olympic debut at Beijing 2022. Melissa Lotholz put her name in the history books when she captured bronze in Innsbruck for the first Canadian monobob medal at the World Cup level.

Cynthia Appiah also made her mark in monobob, finishing fifth at the IBSF World Championships on one of the most challenging tracks in Altenberg, Germany. Lotholz and Appiah are both former brakewomen who switched into the pilot role since PyeongChang 2018.

Despite the Canadian team remaining home for the first half of the bobsleigh season, Justin Kripps and his crew showed consistency and finished third in the overall World Cup four-man standings after being on the podium in three of four races. Team Kripps captured a silver and two bronze medals in the condensed four-man season.

A young Canadian cross-country team showcased great promise with their performances this season. At the FIS World Championships, Antoine Cyr and Graham Ritchie finished seventh in the men’s team sprint while the women’s 4x5km relay and the men’s 4x10km relay both hit the top 10.

The pandemic may have zambonied over most of the figure skating season, but the Canadians were able to put down the performances they needed when it mattered most. The ISU World Championships were the first live competition for the majority of the team in over a year and with Beijing 2022 qualification at stake, they earned Olympic quota spots in all four disciplines.

Piper Gilles and Paul Poirier stole Canadian hearts when they won bronze for their first ever world championship medal. In the pairs event, Kirsten Moore-Towers and Michael Marinaro finished in sixth place overall, matching their career best at the worlds with a wonderful rebound in the free skate. Keegan Messing also landed in sixth place for a personal best placement while worlds rookie Madeline Schizas had quite the breakout in the short program, placing ninth in that portion before finishing 13th overall.

After fracturing his T4 and T5 vertebrae in training and missing the start of the season, Mikaël Kingsbury made a triumphant return, right to the top of the podium. He defended both his moguls and dual moguls world championship titles, in addition to winning two gold medals at the Deer Valley World Cup in the same two events.

Reece Howden and Marion Thénault revealed themselves as rising stars. Howden stood on six World Cup podiums this season with four gold and two silver medals. Just 22-years-old, he wrapped up the season by receiving his first ski cross Crystal Globe and was voted FIS Rookie of the Year. Twenty-year-old Thénault earned her first two World Cup podiums ever, including her first career victory. That helped her win FIS Rookie of the Year in aerials.

Back in January, Canadians saw success on the same slopes at the Aspen X Games. 19-year-old Oldham won big air silver followed by a slopestyle bronze medal. Cassie Sharpe brought home silver from the women’s ski superpipe event where she was joined on the podium by bronze medallist Karker. Evan McEachran added a bronze in men’s ski slopestyle to bring Team Canada’s ski medal haul to five at the X Games.

The pandemic created many obstacles for athletes around the globe. Canadian lugers Tristan Walker and Justin Snith had to pivot when they lost a financial sponsor due to the economic fallout of COVID-19. The Olympic silver medallists did not feel comfortable seeking a new sponsor during this time so they decided to use the space on their sled and bodies to promote non-profit organizations that could benefit from some free marketing.

In each of the four weeks they competed during January, the lugers placed decals on their sled and patches on their outfits to give camera exposure to organizations they care about, including the STARS Air Ambulance, the Kvisle Fund for GBM, the Cochrane Humane Society, and the Gord Downie and Chanie Wenjack Foundation.

Snowboardcross athlete Eliot Grondin had a grand year indeed. The 19-year-old landed on the World Cup podium twice and captured bronze at the FIS World Championships in Sweden. He finished the season ranked second overall in the SBX World Cup standings — the youngest Canadian to ever be top three at the end of the year.

The world championships were also a great showcase for Canada’s high fliers in big air. Mark McMorris brought home gold from the men’s event, where he was joined on the podium by silver medallist teammate Max Parrot. Laurie Blouin claimed the gold on the women’s side. Not to be forgotten is Sébastien Toutant who grabbed the silver in slopestyle.

Blouin grabbed her first medal of the snow season at the Aspen X Games, where she was the lone Canadian snowboarder to land on the podium. In the first competition of the weekend, she won a bronze medal in the women’s snowboard slopestyle event.

When it was all said and done, there was just one international short track competition this season. But that didn’t stop the Canadians from skating to success.

Just 20-years-old, Courtney Sarault earned her first individual podium at the ISU World Championships when she took silver in the 1500m. She went on to win bronze in the 1000m and silver in the 3000m superfinal to finish second in the overall standings.

At the opposite end of the age spectrum, 36-year-old Charles Hamelin was crowned 1500m world champion for the third time in his career. The three-time Olympic champion collected his 37th medal at worlds.

What a time was had in the bubble! A shortened season comprised of two World Cups and the ISU World Championships was held in Heerenveen, Netherlands and the Canadians captured a great haul of medals.

🏆 WORLD CHAMPION 🏆 @Dubreuil92 captures 🥇 in the 500m at the ISU World Championships!
👉 He is the 2nd 🇨🇦 to capture the world title in this event!@SSC_PVC took to the podium with 🥈 in both the men’s and women’s team pursuit!

Laurent Dubreuil was on the podium twice at the world championships. After being crowned the 500m world champion, Dubreuil added a bronze in the 1000m. The sprinter won four medals (three of them in the 500m) during the two World Cups.

For the fifth time in her career, Ivanie Blondin reached the world championship podium in the mass start as she won the silver medal. She also captured silver in the event at both World Cups.

Though spring is upon is, the winter competition season isn’t quite done yet. You can still cheer on Team Canada at the men’s, women’s, and mixed doubles world curling championships as well as the women’s and men’s world hockey championships into May.