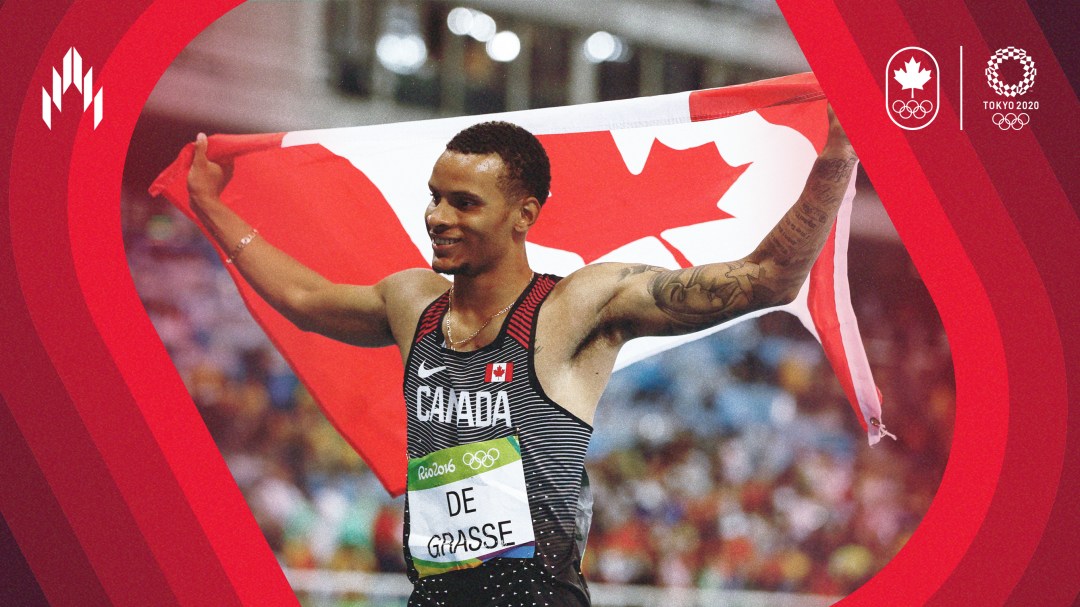 MONTREAL (July 3, 2021) – Athletics Canada and the Canadian Olympic Committee have announced Canada’s athletics team nominated to compete at the Tokyo 2020 Olympic Games. A total of 57 athletes will represent the country in athletics, including 33 women and 24 men.

Members of Canada’s athletics team earned their nomination for Team Canada by achieving the entry standard during the qualification period, or by their World Rankings position as of July 1, 2021. The 47 athletes nominated on Saturday join 10 others who earned early nominations in the 10,000 metres, marathon and 50-kilometre race walk.

“I’m really excited to go to Tokyo. It’s crazy for me to think that I went to the Olympics in 2012, 2016 and now I’m getting ready for my third Olympic Games,” said Damian Warner, who heads to Tokyo as the top-ranked athlete in the men’s decathlon. “I couldn’t be more honoured to represent Team Canada and to go over to Tokyo with this talented group. I will have Pierce (LePage) with me in the decathlon, which will be awesome to have a teammate in the same competition. I’m just really looking forward to going over there and competing.”

“I’m really excited for these Games. I think the extra year really did us some good,” said Melissa Bishop-Nriagu, who finished fourth at Rio 2016 in the women’s 800 metres, the best finish by a Canadian in the event since 1928. “It’s going to be my third Olympic Games; I’m really looking forward to getting to Japan and being in the Olympic spirit. I feel like it’s been so long since we’ve been able to experience that, so I’m really looking forward to it.”

This Olympic year has been like no other. Athletes faced significant challenges, including restricted access to training facilities, inter-provincial travel bans and a mandatory 14-day quarantine period if they chose to travel outside of Canada to compete or train.

Head Coach Glenroy Gilbert praised the athletes for their resilience and unwavering commitment to see their Olympic dreams through under challenging circumstances. “Our team has shown a great deal of determination to get where we are today. When faced with adversity, these athletes rose to the occasion, performed on-demand and made the most of every opportunity they were given,” said Gilbert. “Athletics Canada is fielding a strong team, with significant depth in a number of events. In Tokyo, I’m confident that they will be at their very best and will make Canada proud.”

The Tokyo-bound squad includes 31 athletes with previous Olympic experience, including one three-time Olympian (Michael Mason) and six two-time Olympians (Mohammed Ahmed, Melissa Bishop-Nriagu, Aaron Brown, Elizabeth Gleadle, Gavin Smellie and Damian Warner). They will be joined by 26 first-time Olympic athletes. Malindi Elmore, at 41, is the oldest member of the Canadian team, while 22-year-old Camryn Rogers is the youngest athlete on the athletics team heading to Tokyo.

Canada returned from Rio 2016 with six medals, the most since the 1932 Los Angeles Games (nine medals), including more than the five won at Los Angeles 1984. To go with the six podium finishes, the team registered a total of 13 top-eight finishes, including four fourth, one sixth, one seventh and one eighth-place finish. Five Canadian records were broken in Rio, and eight athletes improved upon Canada’s best-ever finish at an Olympic Games in their respective events.

Leading the charge in the medal haul was then 21-year-old Andre De Grasse who won medals in the 100 metres (bronze), 200 metres (silver) and helped the men’s 4×100-metre relay team earn a bronze. De Grasse was the first Canadian sprinter since Percy Williams in 1932 to finish on the podium in both the 100 and 200 metres at the same Olympic Games. He was also the first athlete since Williams to win three medals at an Olympic Games.

“It’s always an honour to represent my country on the world stage,” said triple-Olympic medallist Andre De Grasse. “I’m really proud and excited to be going to my second Olympics Games. I look forward to making Canada proud.”

“I’m ecstatic to make my second Olympic team,” said Geneviève Lalonde, who was the first Canadian to advance to the women’s 3,000-metre steeplechase final at Rio 2016. “Everyone dreams of being an Olympian once. I get to do it two times. That’s incredible and I never would have thought of that as a kid, so the kid inside me is shining brightly, like an Acadian star. I’m just so excited. It’s been a crazy year, and everyone knows that. It’s going to be a different Olympic Games. Even though our family and friends might not be there on the sidelines, they are there in our hearts. We’ll use that momentum to push us through to our top performances.”

The team will convene in Gifu, Japan, on July 18 and will train at Nagaragawa Athletic Stadium before travelling into Tokyo (or Sapporo) approximately five days prior to an athlete’s first competition.

“When they say faster, higher, stronger they must be talking about this team,” said Team Canada’s Tokyo 2020 Chef de Mission, Marnie McBean. “There are so many exciting stories among our track and field athletes – regardless of the challenges that COVID-19 and stay-at-home orders presented to them, they have come through being able to go faster, jump higher and be stronger than ever before. The stadium in Tokyo better buckle up.Team Canada is coming.”

The athletes nominated are:

The coaches and nominated are: